At first glance, the French Snow White record set from 1938 appears near identical to that of the British version (earlier post), except for the obvious language distinction. Both album covers are made from a paperboard-like material and feature the same artwork on the front and back. And except for the record labels, that's where the similarities end. 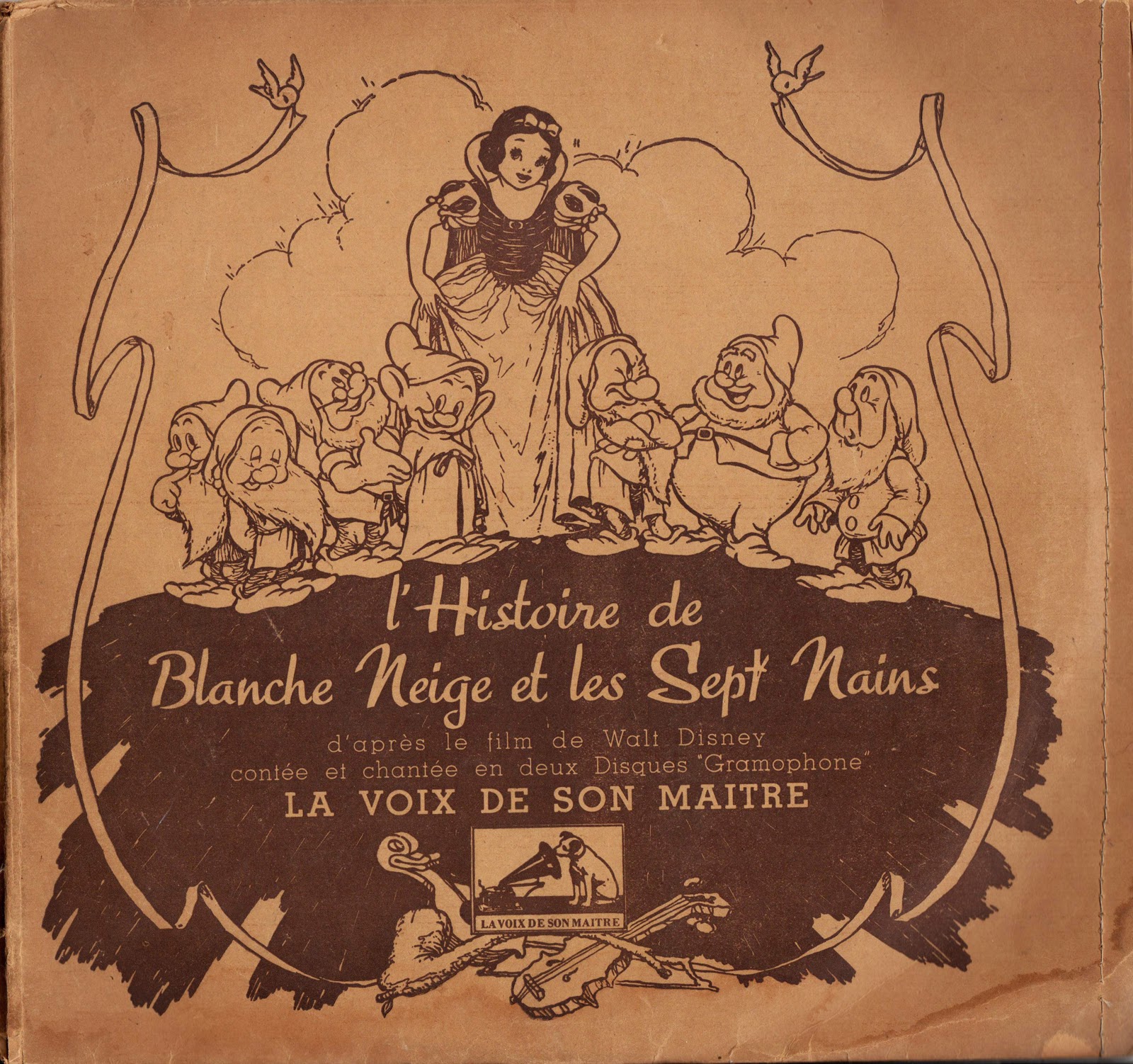 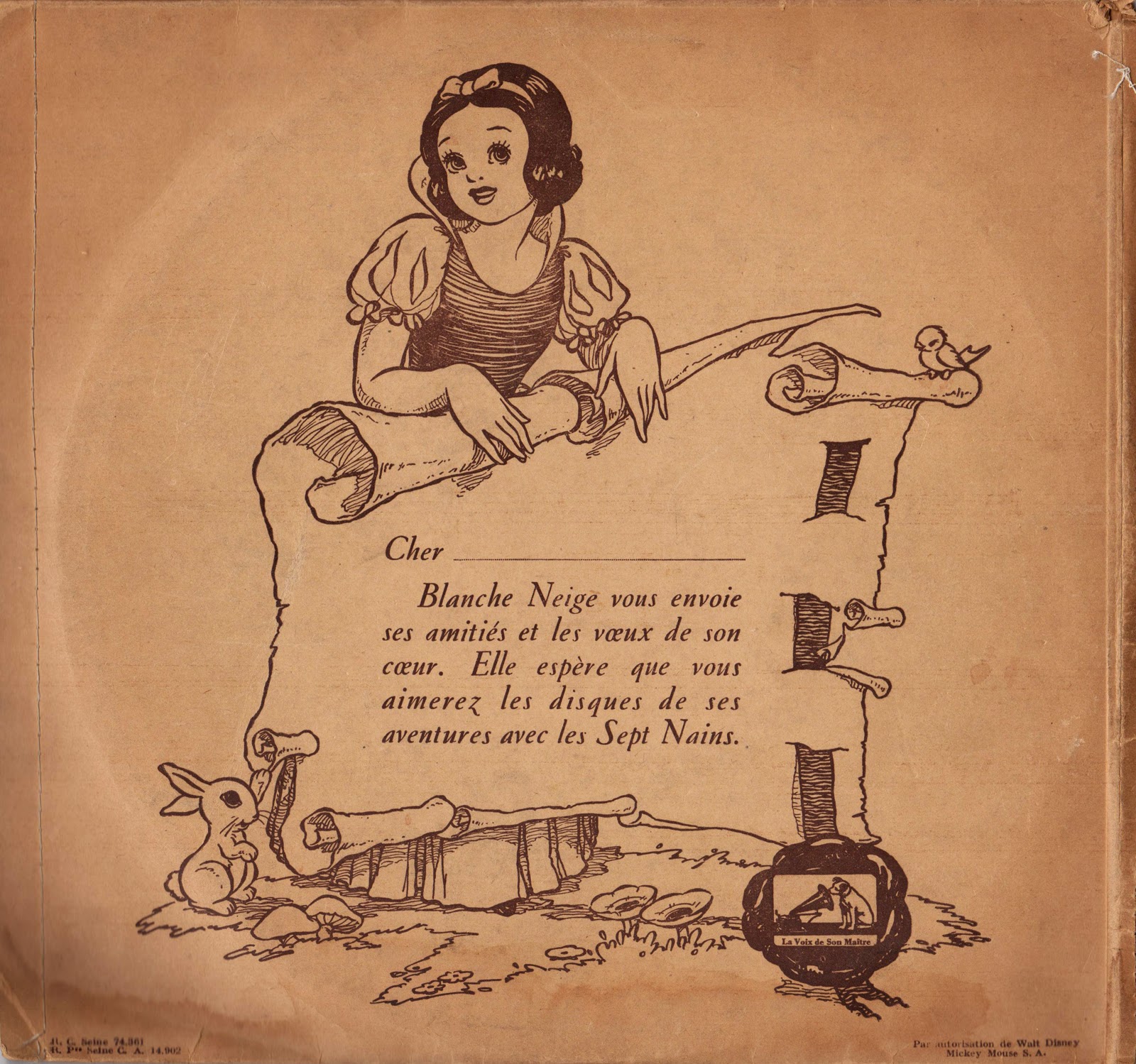 This is a two-record 78 rpm set, not three. It also is not the actual soundtrack from the film.

The 1938 French dub for the Snow White motion picture was recorded at the Disney studio in California. However, as far as we can tell, it was never issued on a record album. Three probable reasons why:
So instead of the movie soundtrack, this two-record set is an alternative recording which was produced and released in France. The album features the Snow White story with short song snippets mixed in. The talking and singing voice of the princess was played by Belgian singer Elyane Célis.

The yellow record labels are similar to those used in the British release. 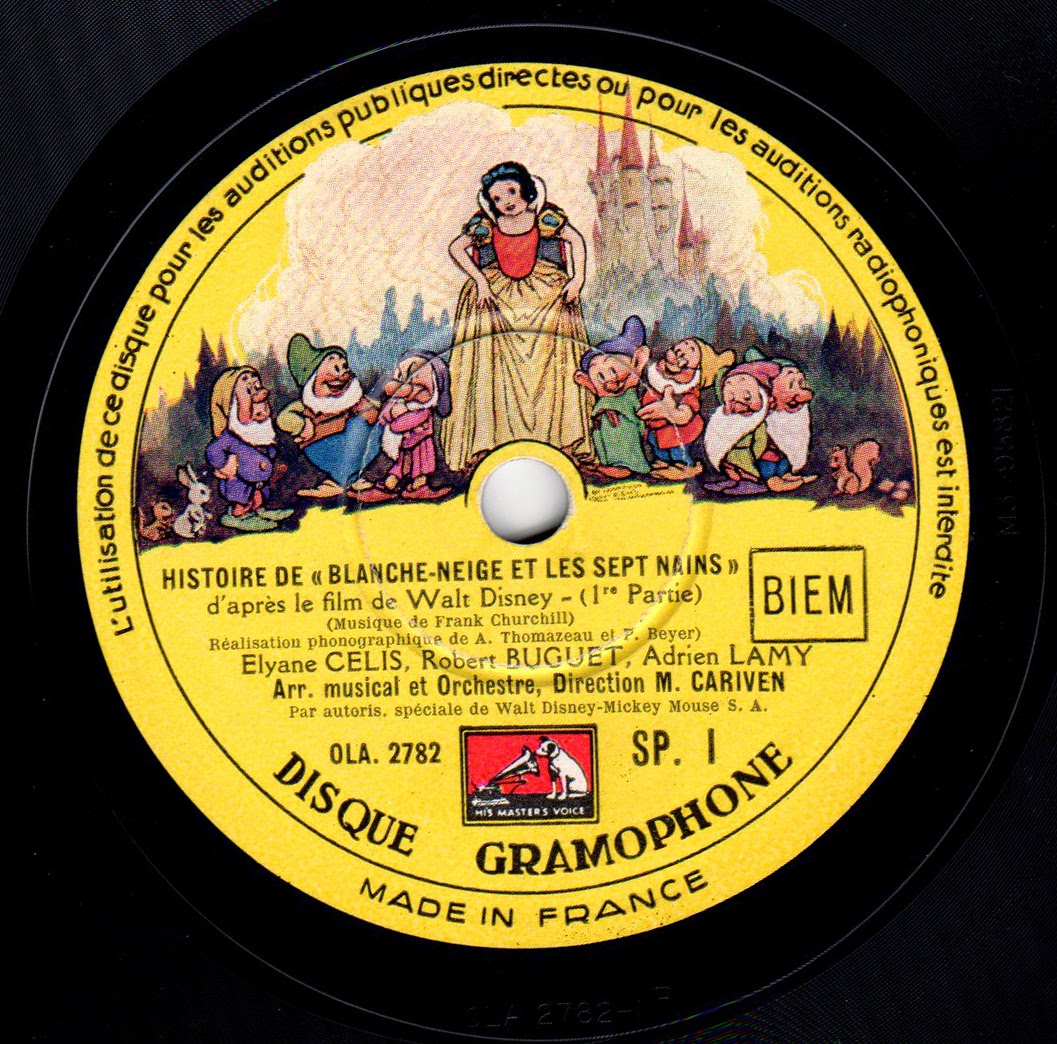 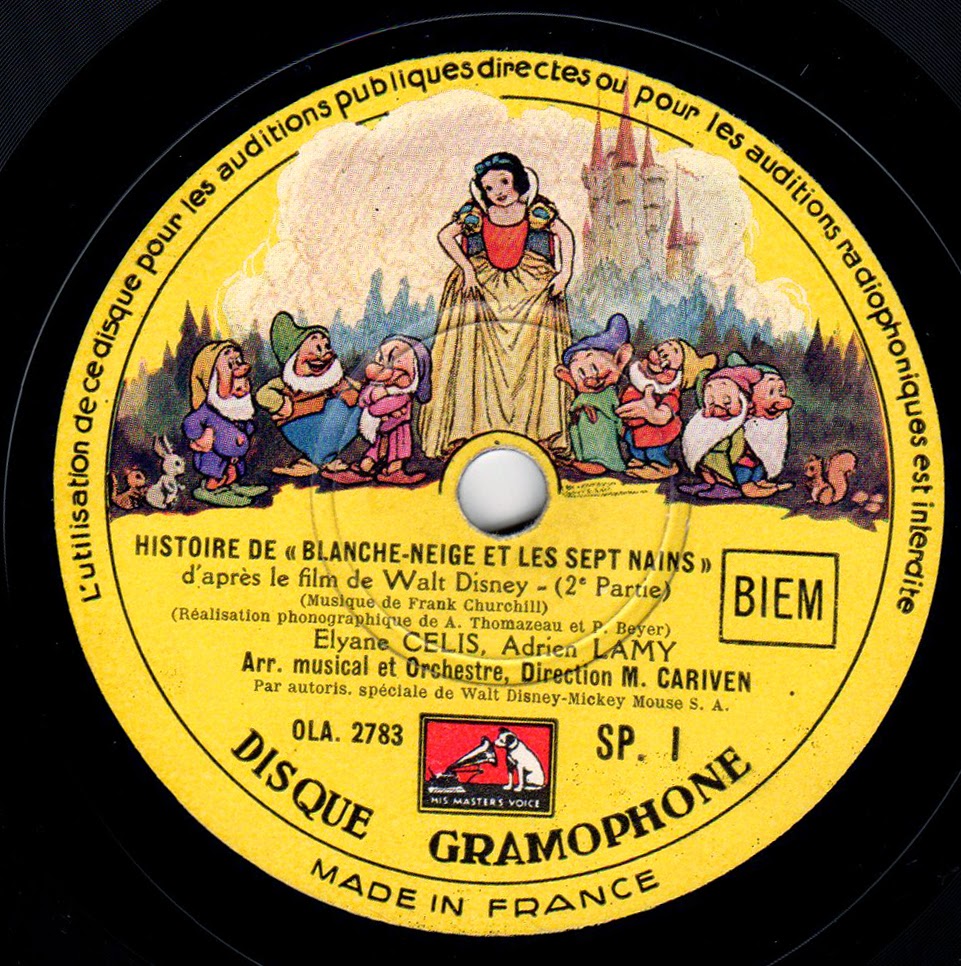 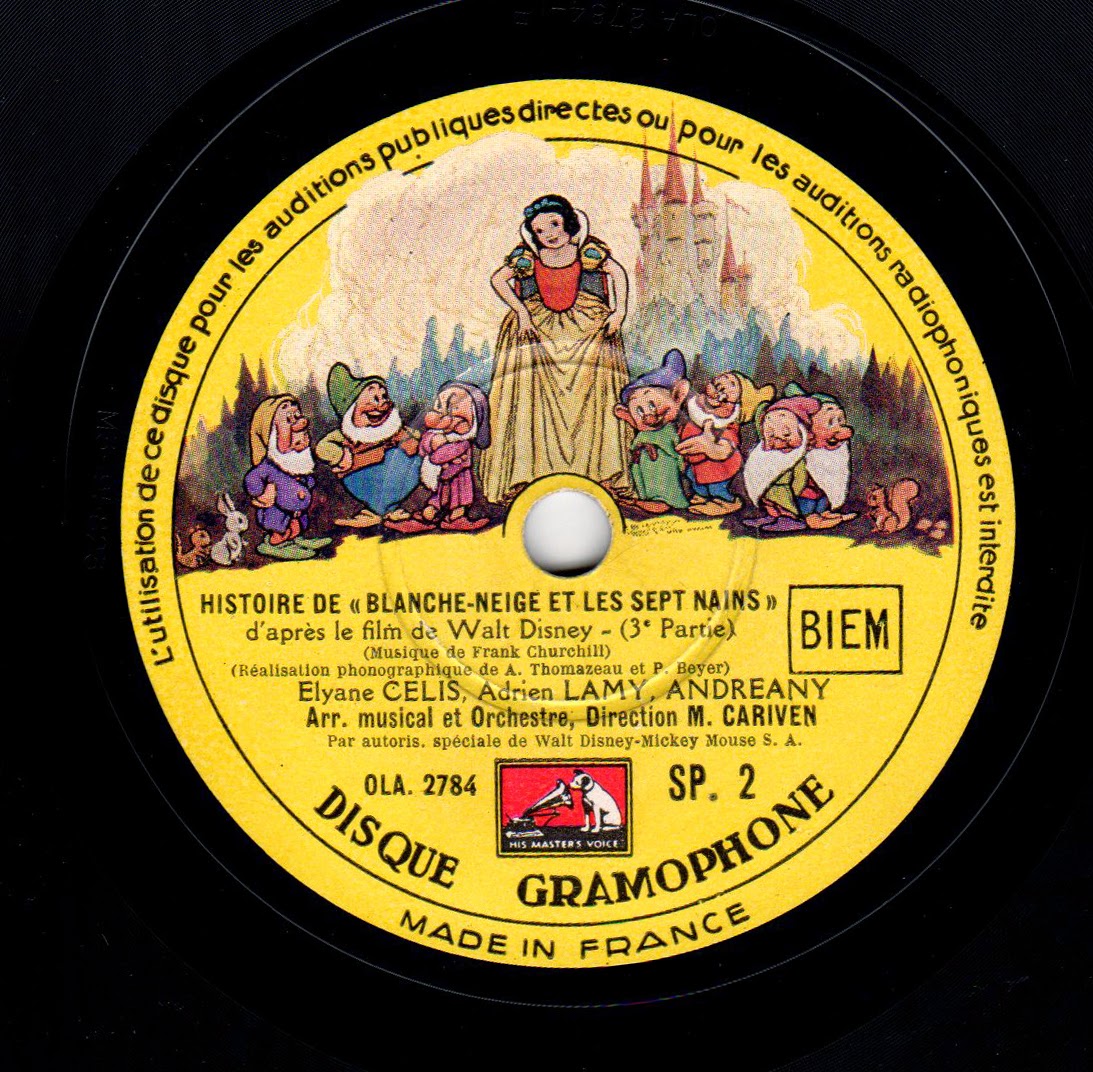 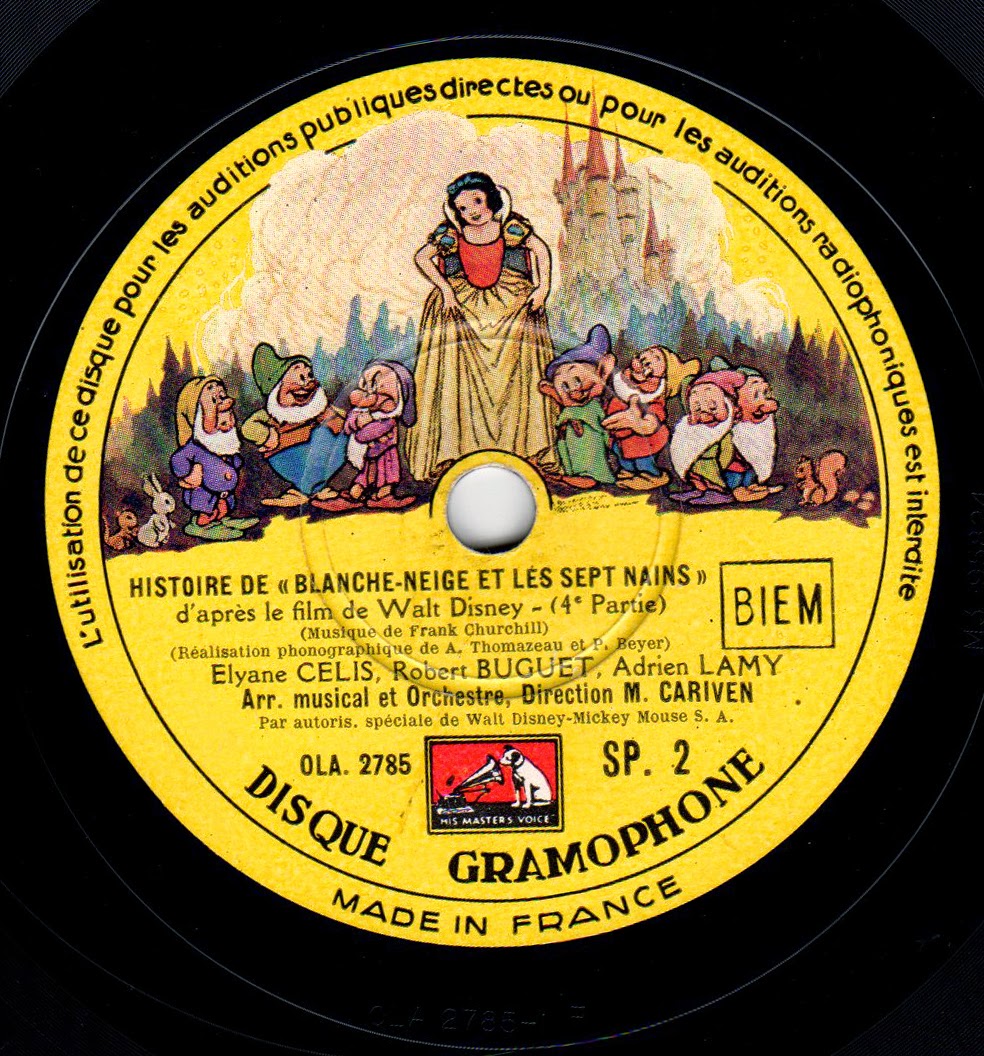 Several sources credit Elyane Célis (and/or fellow French singer Lucienne Dugard) as the actual voice(s) of Snow White in the Disney film. Both did make separate recordings of the popular songs and thus surfed on the success of the movie.

However, as mentioned above, it was Beatrice Hagen who did the singing in the picture and actor Christiane Tourneur played the speaking voice of the princess (see earlier Archive entry for more details.) Yet, neither would ever end up on a record album. 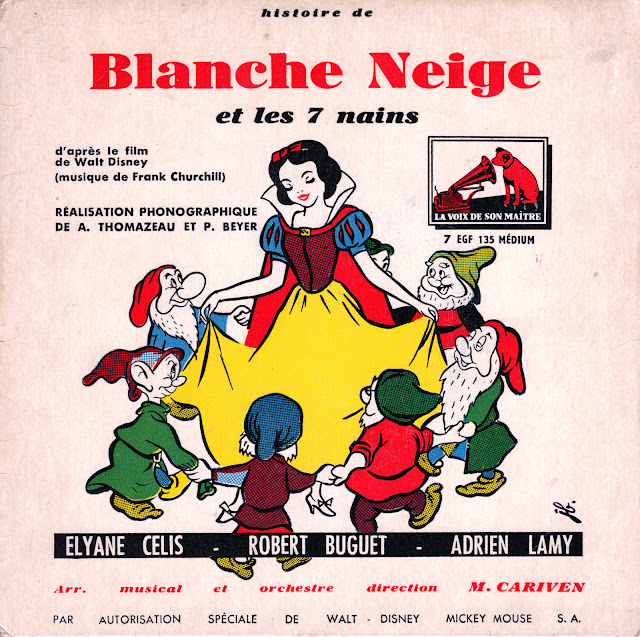 On the back cover is an advertisement for a 78 rpm record of Disney's Peter Pan (again, in story format with re-orchestrated music rather than the original French dub). 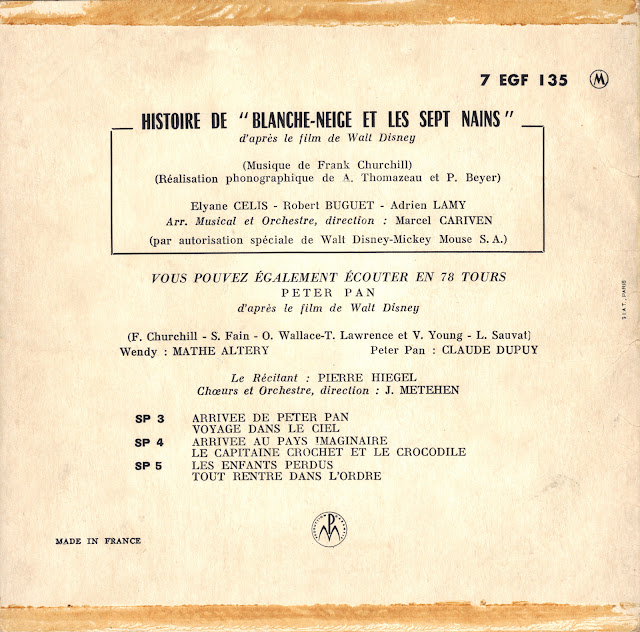 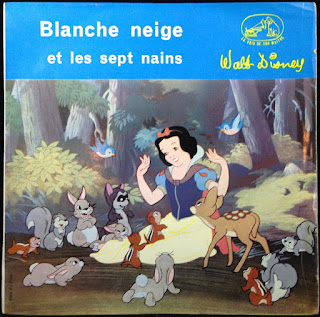 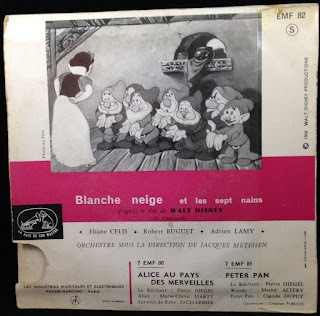 In 1964, Elyane Célis' 1938 recording appeared on a 331⁄3 rpm album. On the flip side is Alice in Wonderland (story and alternate song recordings). The lead for Alice on this record was Marie Claire Marty, who was also the original French voice of Faline (Bambi) and Wendy (Peter Pan). 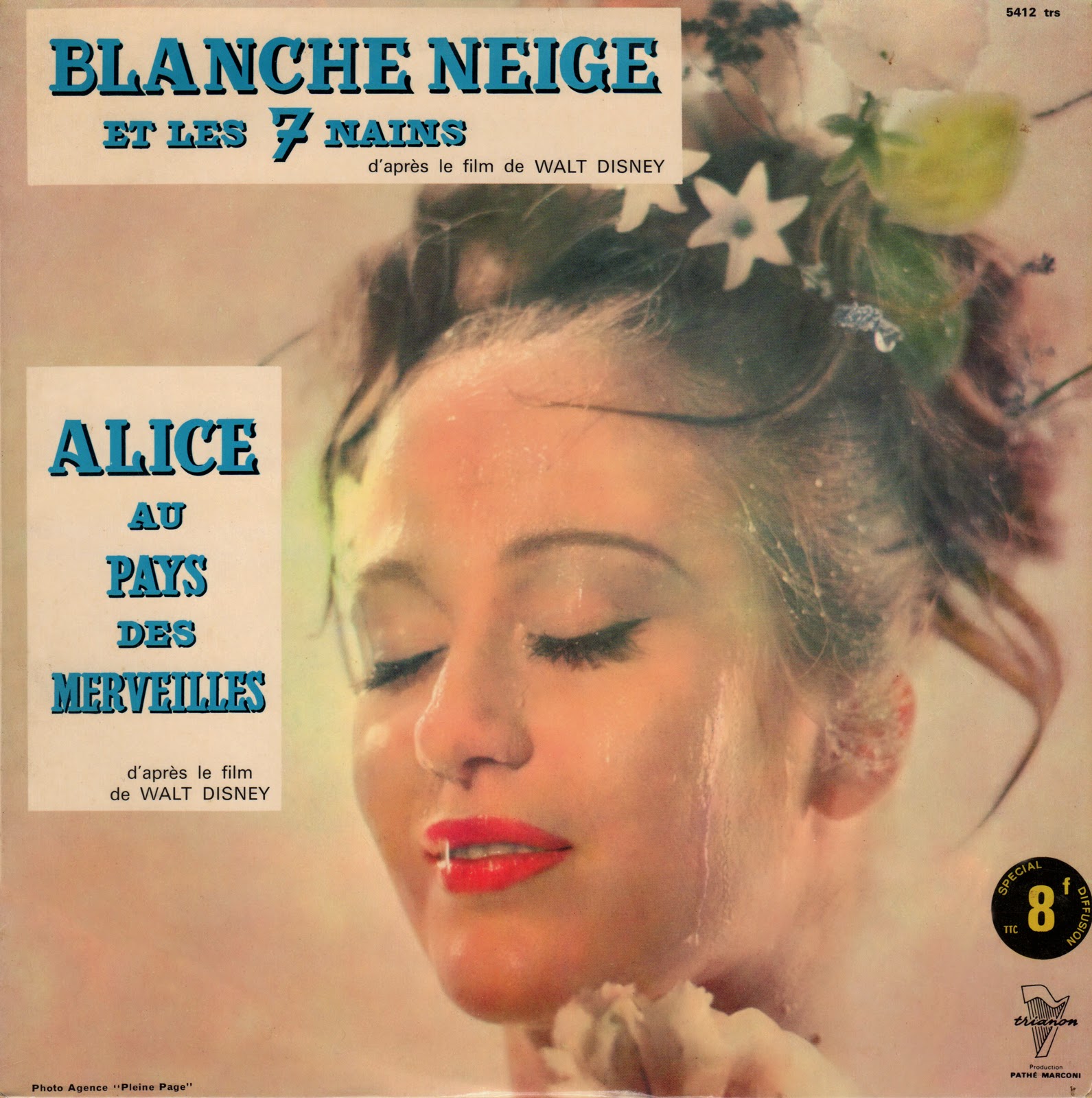 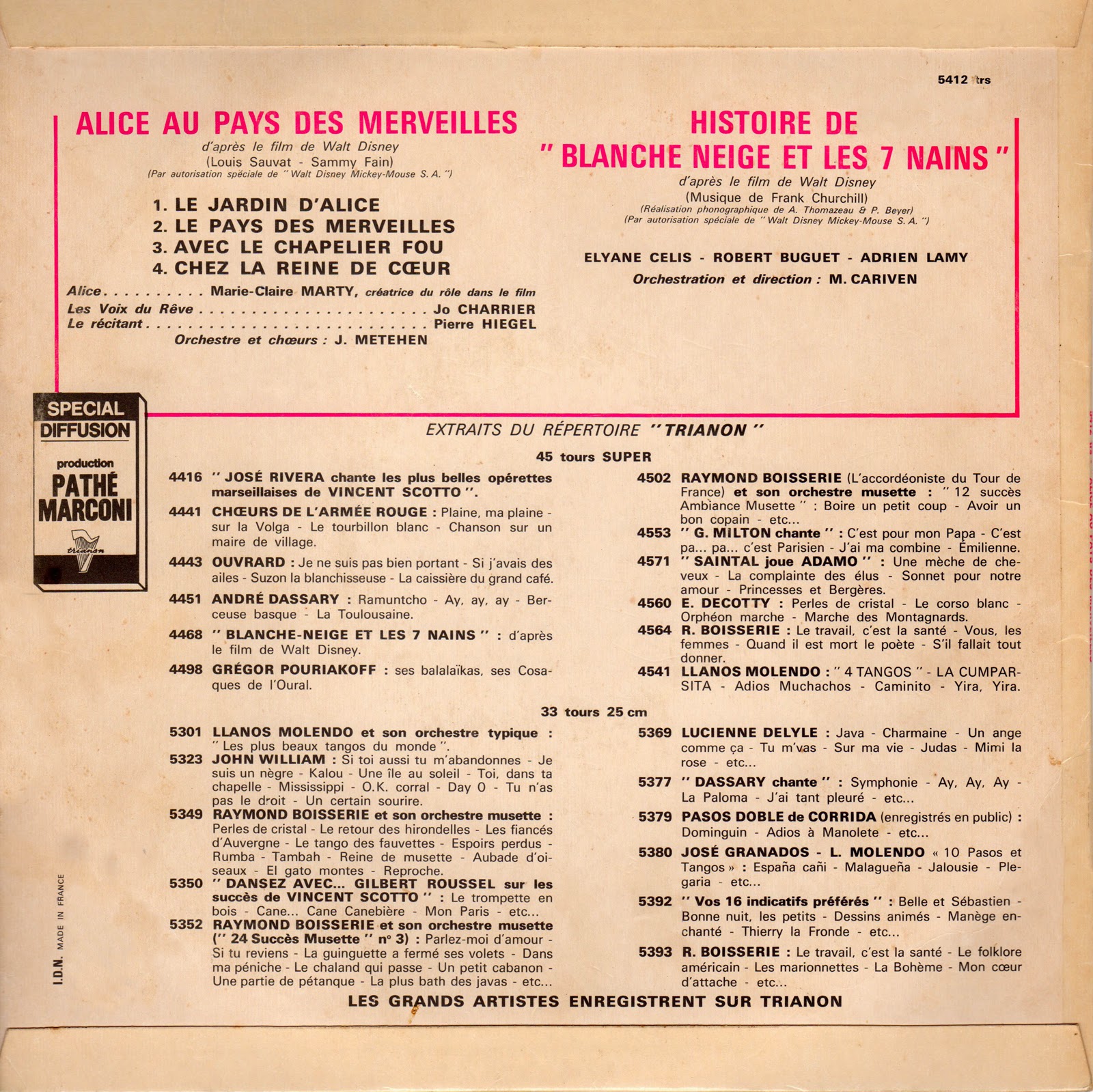 Other records featuring this Elyane Célis recording were probably issued as well. In an interesting side note, Elyane had a limp. When she performed on stage, she very often sang sitting down (on a piano, a chair, etc.).

In addition to Elyane Célis, two other voice actors are credited on this 1938 recording--Robert Buguet and Adrien Lamy. I made an inquiry to researcher Greg Philip to see if he might know which roles they played. Here's his response:

There is never any written detail about the other performers. Even the BNF (the National French Library) who owns a copy does not list any more information. I sense that Elyane voiced the Queen too, especially considering how little is said--she just goes "Snow White!" when the mirror first mentions the princess.

Buguet and Lamy, along with another uncredited performer, André Any (or "Andréany"), are singers. They all probably form the dwarf choruses, like Heigh Ho and The Dwarfs' Yodel Song, and also the spoken voices (which are very scarce, like "She stays!" or "Good night Princess").

In short, except for Snow White, the only voices you really hear are the Prince (singing only), and the narrator (throughout).

Adrien Lamy's claim to fame in France was that he sang J'ai deux amours with Josephine Baker, a very popular song to this day glorifying Paris. He died in 1940 during a bombing. I think he is the narrator.

Robert Buguet's voice sounds like that of the Prince. Of course, this is based purely on my ear comparison of the songs. My judgment could be biased by the fact that old recordings tend to distort their voices. From one song to another, you'd swear it was a different person.

One final thing that made me smile about this recording is the reason given for why the Huntsman does not kill the girl. It's not empathy or because she's sweet or anything. His motivation is that "She's too beautiful." Apparently, if Snow White had been ugly, she would have deserved to have her heart ripped out of her chest.


Special thanks to Greg Philip of A Lost Film for sharing this information and images from his record collection.
Posted by Snow White Archive at 12:01 AM