Albert Hurter, a soft-spoken, solitary man, was the acknowledged "expert" at the Disney Studio. Let's say you needed an opinion on the direction your drawing was going, he would be the guy who could tell you--and without mincing his words either. Unlike most other animators of the era, Albert was formally schooled in art history and the techniques of drawing. According to Disney Story Department head Ted Sears...


Walt was the first cartoon producer to appreciate the special talents of the individual artist and allow him to concentrate upon the thing he did best. Since Albert's outstanding ability lay in humorous exaggeration and the humanizing of inanimate objects, he was soon released from animating and set to work drawing inspirational sketches. Each time a new subject was planned, Albert was consulted and given free rein to allow his imagination wander, creating strange animals, plants, scenery, or costumes that might serve as models for the forthcoming production.

Veteran Disney storyman Ted Sears on Albert Hurter. From the introduction to He Drew As He Pleased, 1948. 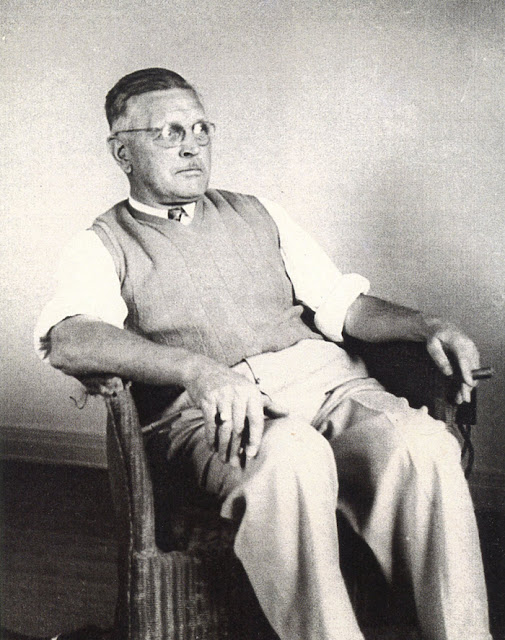 Albert Hurter was respected for his drawing skills, his knowledge of art, and his fanciful imagination. Yet, to the general public, little else was known about the man before 1996. This was the year that Hyperion published historian John Canemaker's excellent book, Before The Animation Begins. And more is recounted in his second volume on Disney animation, the 1999 Paper Dreams. 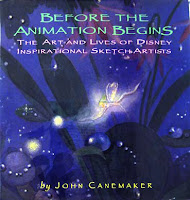 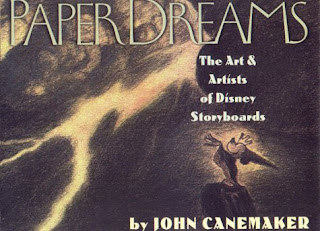 What we learn from Canemaker's research is that Albert's life story is really comprised of four distinct stages.

Hurter was born on May 11, 1883 in Zurich, Switzerland. His father, Albert Sr., was a Swiss mechanic, and his mother, Maria Schmid, was of German nationality. Two younger brothers came along, the father started a new teaching career as a drawing instructor in mechanical engineering, and the family moved to a nicer home.
Influenced by his father, Hurter became interested in art and drawing, and as a teenager studied architecture. He also started his lifelong hobby of collecting stamps. It was during this time that he was diagnosed with rheumatic heart disease...


It is possible to hypothesize that some (if not all) of Hurter's odd behavior and solitary lifestyle can be attributed to medical problems.
John Canemaker, Before The Animation Begins, p18.

In 1903 Albert moved to Berlin where he would study art for the next seven years. In 1910 he would return home, but the details of this period are unclear. What is known is that two years later in 1912, Albert Sr. had passed away, and by 1916 Albert Jr. was living and working in America.

More than once in Albert Hurter's animation career did he find himself in the right place at the right time. There were other early pioneers of animated films, but the Barre-Bower Studio located in the Bronx in New York City, was the first to set up an assembly-line style of production so as to create not just one, but a series of shorts. This was the birth of the animation "industry", and our man was about to land himself a job.


An early Raoul Barre animation predating the arrival of Albert Hurter.
Video posted by the US Library of Congress.

Albert was hired by Barre-Bower just as they were underway on a new series of Mutt and Jeff shorts. With his superior drawing skills and his extension knowledge of art, it wasn't long before he was considered the studio's top animator. Co-worker Richard Huemer, who shared the same workbench with him, recounted one particular difficult assignment of a flag billowing in the wind...


Instead of taking the easy way out, say, using three or four drawings crudely flapping repeatedly back and forth, Hurter "looked out a window, saw a flag, and wonder of wonders, he actually copied the movement. Studied it and copied it! Something which nobody had done before...And when the scene came out we just thought, "This is the end! The living end! This is the greatest!" Before The Animation Begins, p18.

Hurter only spent two years at Barre-Bower, and his sudden and unexpected departure left his co-workers scratching their heads. He was working on a World War I cartoon where the German Kaiser set a trap by using dummy figures to represent President Wilson and other Allied leaders. In the scene Mutt and Jeff discover the plot and knock the heads off the phony duplicates. After seeing his work, Albert's associates jokingly teased him, saying things like he might get in trouble with the government, and "will you be able to convince the police that you are not an enemy German alien?"
This tomfoolery on the part of Albert's co-workers may have had the opposite effect of what they intended. Several days later, Hurter, with bags packed, bumped into the studio boss I. Klein at Grand Central Station. Hurter said he sat up all night thinking about it. "I am going to California now."


Hurter wandered into designing "fashions, furniture, stained-glass windows and...advertising art," and traveled toward Mexico and the Southwest. He never married, and in the late 1920s was living in the old Hotel Westminster in a seedy section of downtown Los Angeles, illustrating a printing company's direct mail advertising, and occasionally "turning his hand to bits of animation for Hollywood producers."
Ted Sears, the head of Disney's fledgling story department, knew Hurter from Barre-Bower and it's likely he [that brought him] to Disney.
John Canemaker, Before The Animation Begins, p10.

June 1st, 1931. Albert Hurter is hired as an animator by Walt Disney. And once again, our man Hurter finds himself in the right spot at the right moment in time--the rise of the Golden Era of animation and employed at the top establishment! The Disney Studio is about to transform forever how the world looks at animated films and Albert will be one of the reasons why. 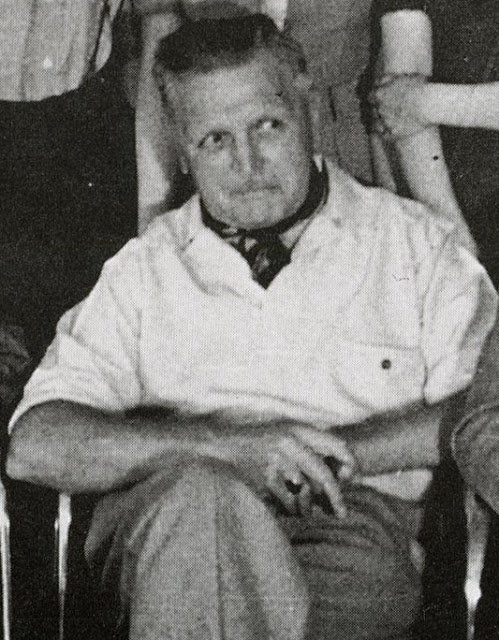 He was no spring chicken. At 48, Hurter was twice the age of most of the other animators. They thought of him as an old man. In addition, Disney wasn't interested in the primitive Mutt and Jeff style of animation that Albert once did. Characters must now radiate with personality. So just what saved the day for our aging Swiss immigrant? It was Walt's ability to recognize people's strengths. With Hurter's imaginative and exaggerated drawing style, his technical skill, and his knowledge of European art history, it wasn't long before Walt Disney assigned him to Ted Sears and the Story Department (which at the time consisted of just two others: Pinto Colvig and Webb Smith).
Albert was to be Disney's first inspirational sketch artist. As a potential source of ideas, his job was to design characters that the animators would then refine and bring to life. Between 1932 and 1934, the Story Department grew to a dozen, and Albert shared an office with sketch man Bob Kuwahara and Joe Grant.

By this time, Hurter was the studio authority on how things should look..."from characters and costumes to settings and scenery." He would be...


...consulted and given free rein to let his imagination wander, creating strange animals, plants, scenery or costumes that might serve as models for forthcoming production...Disney had found the ideal outlet for Albert's talents. John Canemaker, Before The Animation Begins, p10.

Just a few of the shorts he influenced include Babes in the Woods, Building a Building, Three Little Pigs, The China Shop, The Goddess of Spring, and Music Land. 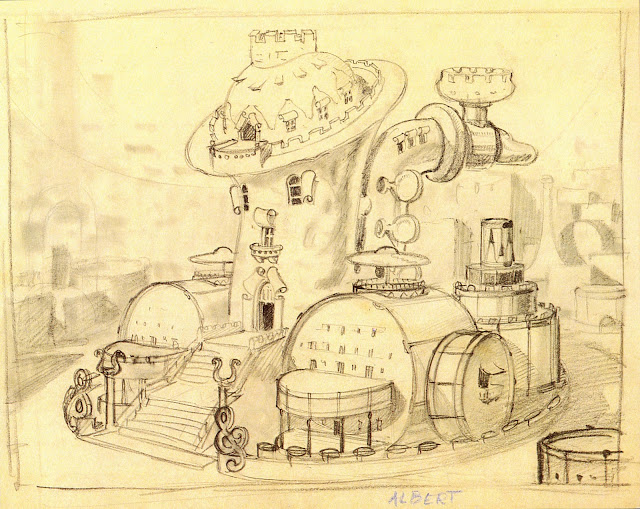 Music Land. Image via Before The Animation Begins, p12.


Unlike the characters that populated most of the Disney shorts, a more realistic design was wanted for the Snow White feature. Albert would become the "go-to" guy for this as Disney made him the authority on the "look" of the film. All designs--from characters to scenery--had to be approved by Hurter.

Albert was not alone. Inspirational sketch artists Gustaf Tenggren and Ferdinand Hovarth would also have a tremendous influence on the film's Old World polish. And Joe Grant would create the design for the Old Witch. Nonetheless, Hurter's "mark is on every major sequence from the comic to the melodramatic."


It wasn't necessary to explain anything to him, cause its what he gave to you rather than what you gave to him. The exchange was all on his side. Before The Animation Begins, p21. 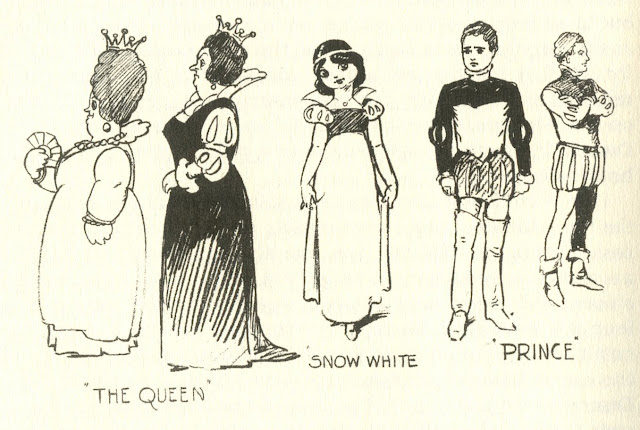 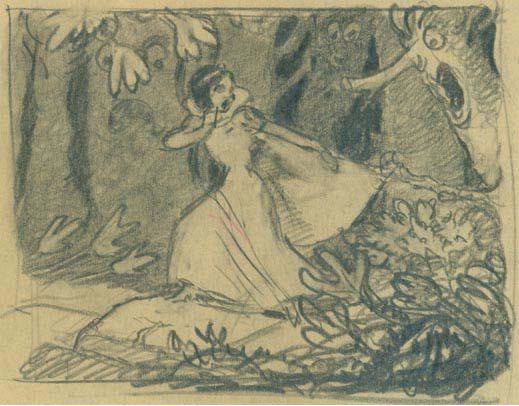 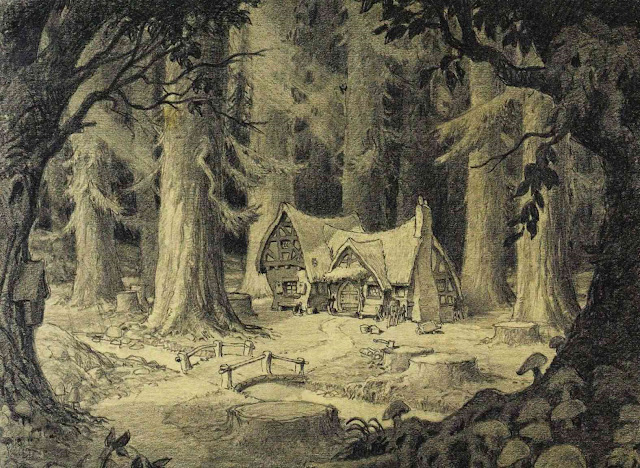 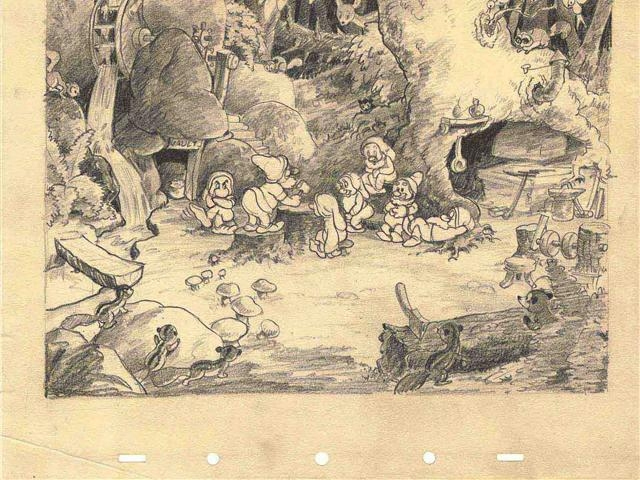 Preliminary study of dwarfs at mine, 1935. 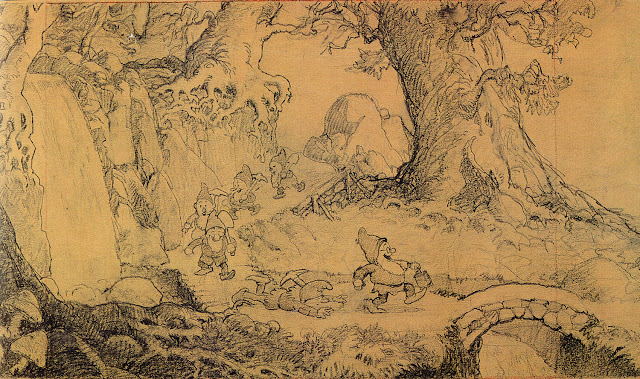 Sneezy's sneeze control suggestions. Image via Before The Animation..., p13. 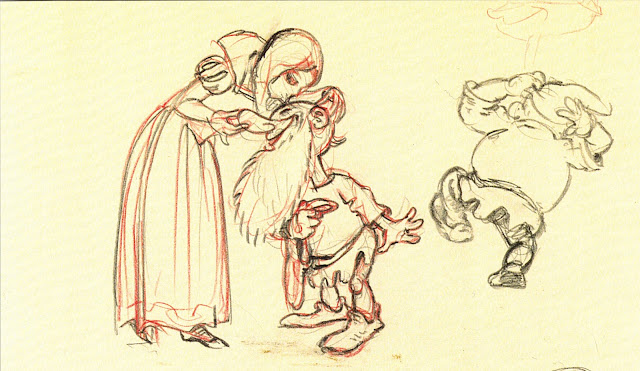 Suggestion on how Snow White might kiss grumpy on head. Image via Before The Animation..., p14. 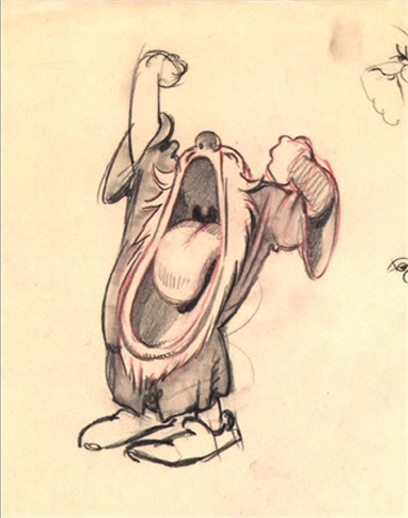 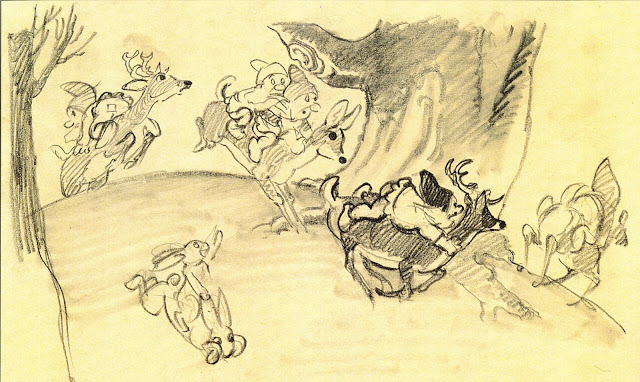 Ideas for how the dwarfs give chase. Image via Before The Animation..., p14. 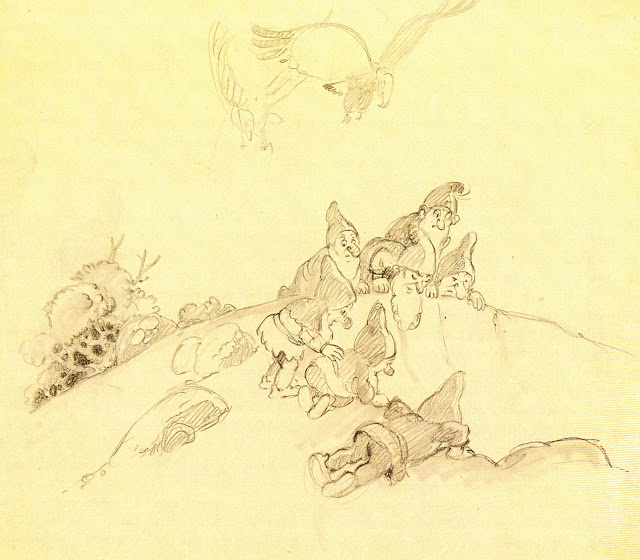 Dwarfs watch Witch fall to her death. Image via Before The Animation..., p17.

Ideas for dwarf grieving. Image via Before The Animation..., p17.


One of the early concerns of Walt Disney's (and others) was whether or not the audience would believe in the realism of the "cartoon" characters. Would they actually feel for Snow White when she lay in her sleeping death? Albert created several drawings depicting the dwarfs grieving over the princess, the one below making it into the final film almost as he had originally sketched it. 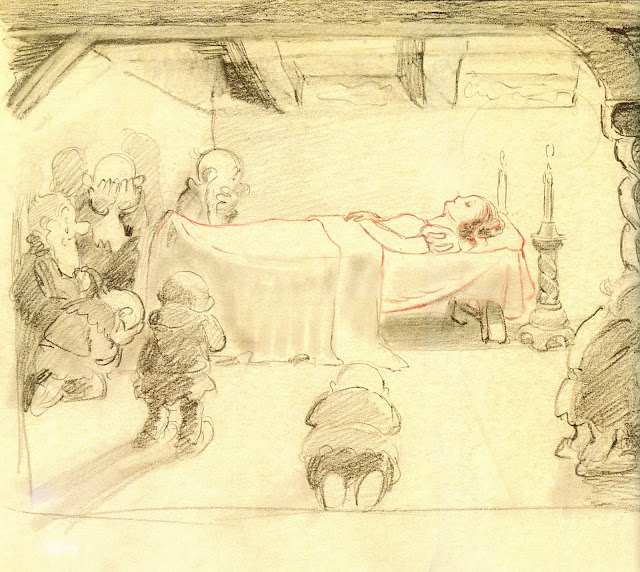 Albert's employment at Disney lasted a decade. In this time he helped raise the artistic standards of the studio to a degree never before seen in animation. As with Snow White, he was given creative authority of Pinocchio. He contributed to the design of numerous characters in Fantasia. the atmosphere and props in Dumbo, and concepts for The Reluctant Dragon. Some of Albert's sketch ideas would even be used in films whose production would not begin until long after his death...Peter Pan and Lady and the Tramp.
It was 1941 when one day he came to work and his arm went numb, "more or less paralyzed." He entered Cedar Lodge Sanitarium in LA where he would spend the next 14 months receiving treatment. He continued to draw while at his new confines, and Walt and others from the studio would visit him.

Albert was always a heavy smoker. His colleagues never saw him without a cigar in his hand. It's possible that this contributed to his condition. Hurter never left the hospital and died of rheumatic heart disease on March 28th, 1942.

Six years after his death, hundreds of Albert's drawings would be compiled into a book entitled, He Drew As He Pleased. More on this in next post. 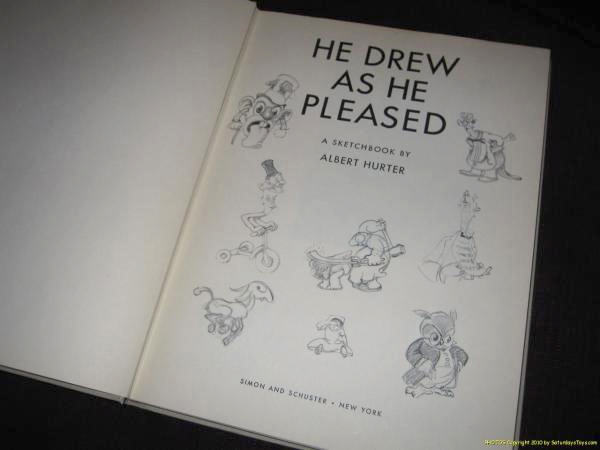 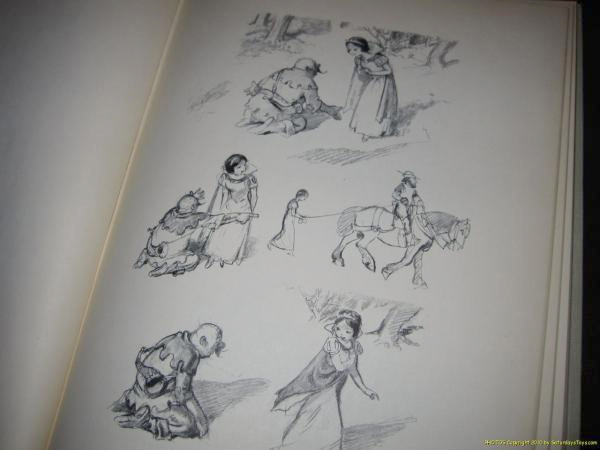 Book images via SaturdaysToys.
Posted by Snow White Archive at 12:02 AM