'Beware of Witch' Signage from the "Scary Adventures"

This little gem comes to us from Snow White/Witch collector Kurt Raymond. It's the "Beware The Wicked Witch!" warning sign that hung out at the entrance to the original Disneyland "Snow White's Adventures" ride. It was installed during the summer season of 1978, and it remained there until December 20, 1981 when this version of the ride was closed and scheduled for demolition.

When Snow White and the Seven Dwarfs first premiered, it wasn't promoted as a little girl's princess movie. With a dark villain, emotional plot twists and attempted murder, it was a film that was probably enjoyed more by the parents who saw it than the frightened children who accompanied them. In the early 1950s, Walt Disney and his imagineers designed the Disneyland Snow White attraction to stay true to dark side of the film. It would be a ride where the Witch would dominate the show. Then a funny thing happened. Years passed, society changed. So did the promotion of the movie with leanings more and more toward a target audience of younger kids, little girls in particular.

Families visiting Disneyland with preschoolers would board the Snow White's Adventures ride expecting a fairytale experience with dwarfs and forest animals. Often enough, they'd exit terrified and traumatized. In his book, The Unofficial Guide to Walt Disney World (different park but same idea), author Bob Sehlinger quotes a mother talking about her experience...


My daughter screamed the whole time and was shot for the day. Grandpa kept asking, "Where in the hell's Snow White?"

Hence, the appearance in 1978 of the "Beware The Wicked Witch" sign--twenty three years after the attraction first opened. Measuring approximately 17" X 21", the framed 'Witch with Apple' image is completely hand-painted. 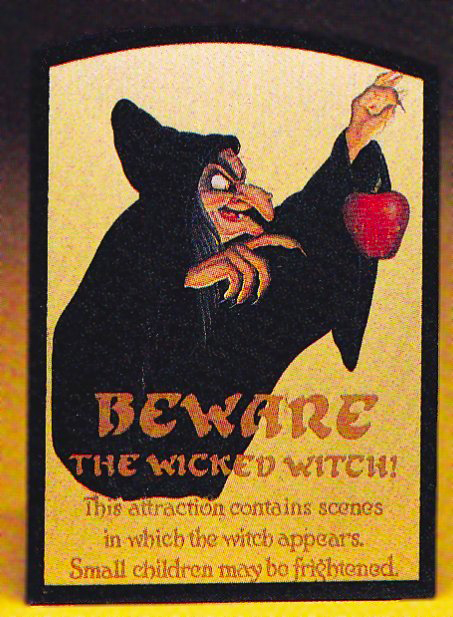 
The sign is now housed at the Disney Archives in Burbank. Disney historian Dave Smith himself is the very individual who went through the Snow White attraction just before demolition and chose this sign to be saved for 'archival value'.

For many years up through the late 1990's, college students and "Disney Scholars" (as they were called by Disney employees) along with the general public were allowed into the archive rooms (by appointment only) for research on Disney material. Kurt had an opportunity back in 1986 and again in '87 to do this during his personal research on 'old Fantasyland' and specifically the Snow White attraction. It was at this time that he learned the sign was there. It was also during this period that the Disney News magazine (which Kurt was given a copy of while at the Archives) published the image of the sign.

After the Fantasyland renovation was completed and the new attraction opened in 1983, there doesn't seem to be evidence that a "warning" sign was in place, at least until about 1985. Here is the current sign that stands today at Disneyland's SWSA... 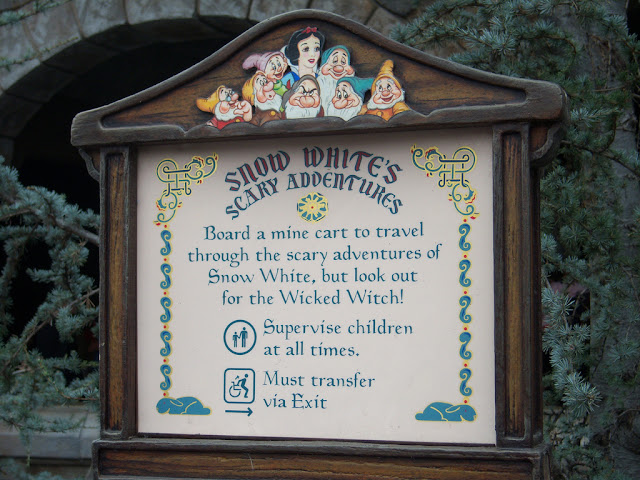 
The "Beware The Wicked Witch" sign in front of SWSA Paris, installed about 2009... 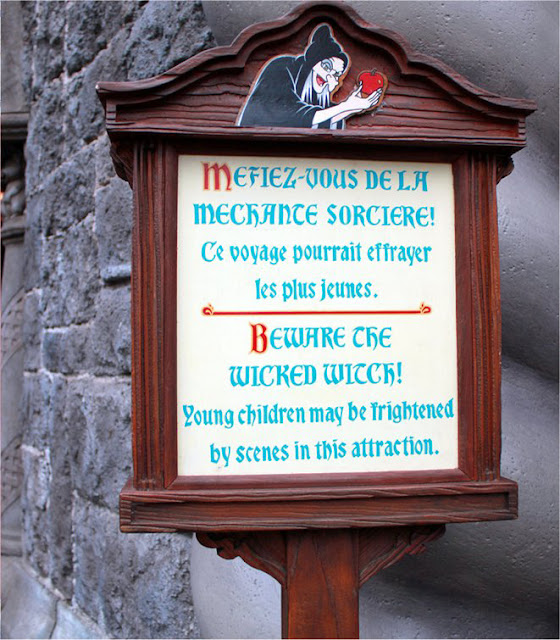 
Tokyo has something similar to the original, installed circa 2005... 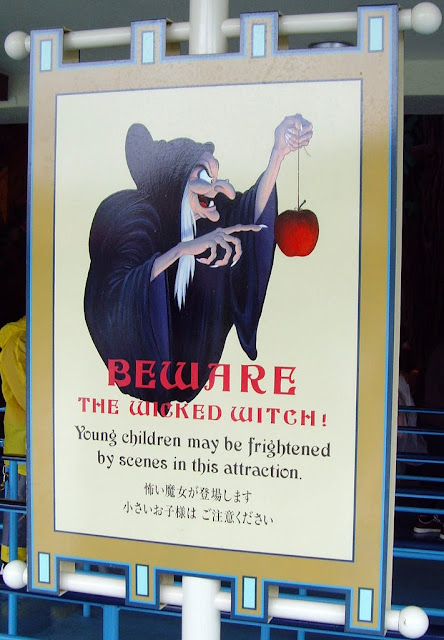 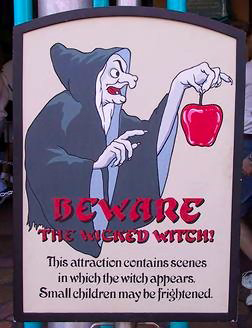 Walt Disney World had a replica of the original for awhile. It first appeared in front of the attraction back in 1994 after the ride had been renovated. The sign lasted until circa 2004.

It was replaced by this sign which will be with us for just a little while longer... 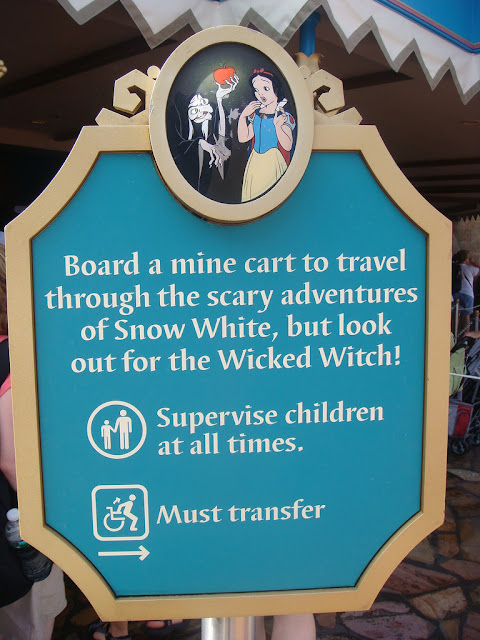 See more SWSA signage in this earlier post. Special thanks to Kurt Raymond for adding to the accuracy of this article.
Posted by Snow White Archive at 12:01 AM