One of the notable distinctions about the Snow White ride is that for the most part, it is presented from the perspective of the young princess herself. In the original 1955 Disneyland design, Snow White was never seen. As the rider, you were her. Your experience was what she experienced. This is how the WDW version was designed as well. But during renovations in 1983 and 1994 at the two respective parks, imagineers decided to change it a bit, to make the ride less frightening for younger children. In addition, they sought to quell the inevitable question that guests would ask upon exiting the ride, "Where the heck is Snow White?" With the redesign, the princess would now makes a few appearances at certain points in the story. Nonetheless, the ride would still lead guests on an adventure--Snow White's adventure.

Now as rides go, the mechanics and special effects of this one are not the latest, greatest state-of-the-art. The audio-animatronics of Pirates and the simulated universe of Star Tours are much more sophisticated and advanced in their technological wizardry. But four days of sun, palm trees, and fun had opened a door for me. My childlike nature was ready for anything. And while I was still ignorant of the fact, this Snow White mythological tale was mine, that is, it would speak directly to my archetypal core. So for me, this experience would prove way more powerful than any other I'd had at WDW.

Ti and I were not the only adults in the queue for this ride. Many had kids in tow, but substantial numbers did not. We boarded our vehicle, waited for the bar to release, then lower, and headed off into the bowels of this "dark" ride. 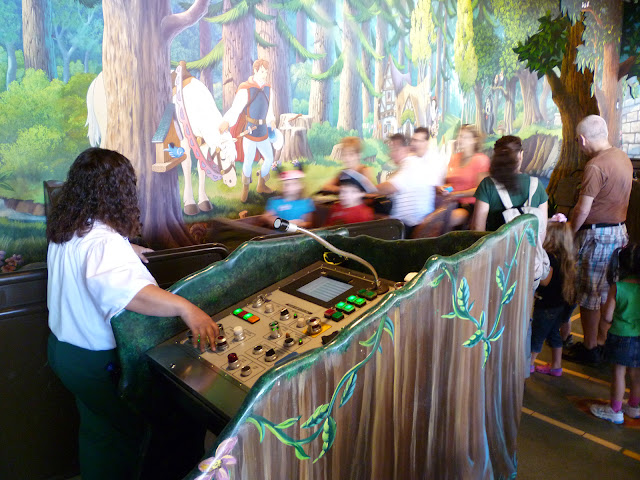 The WDW ride begins by taking guests through the Queen's courtyard where Snow White is seen on the steps outside. The Queen is watching her (and us) from a castle window. 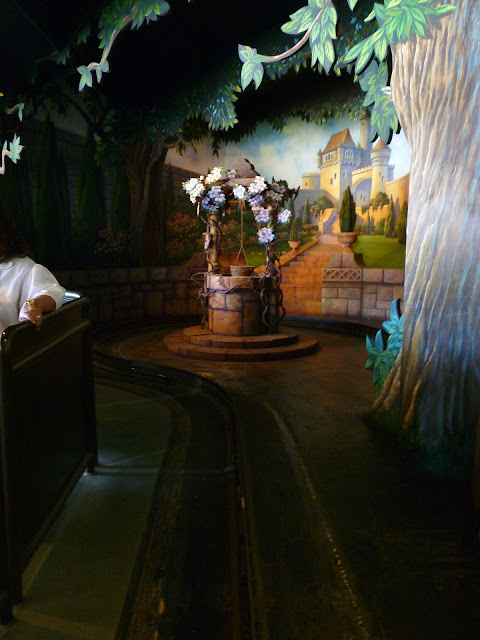 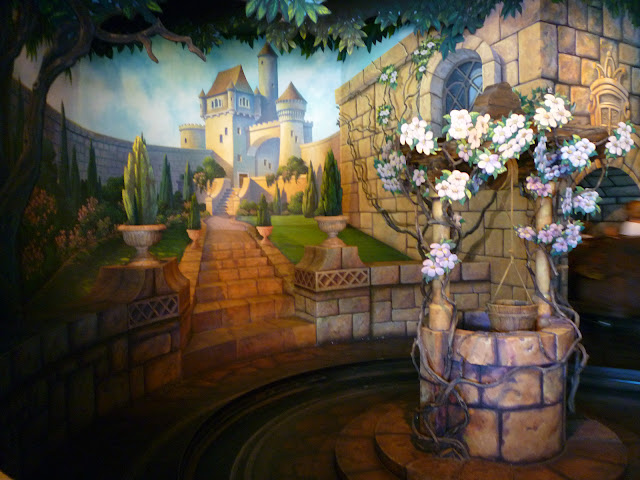 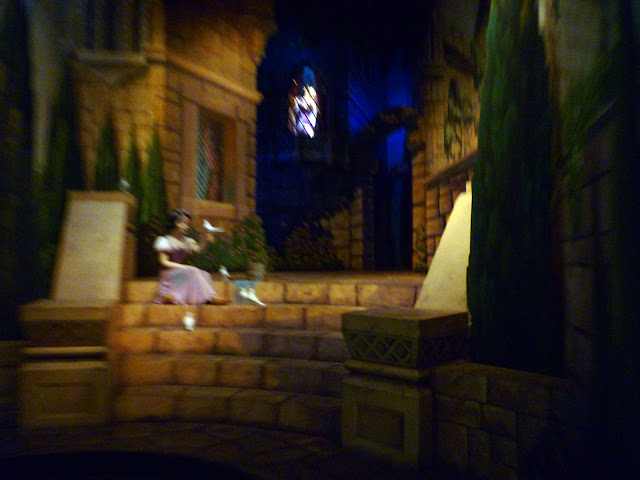 We then enter the castle and are greeted by the speaking Magic Mirror. As we turn a corner, we see the Queen standing, gazing upon her reflection in the mirror. Suddenly she spins to face us, but instead of the Queen, we see the green-eyed, nearly toothless Hag. 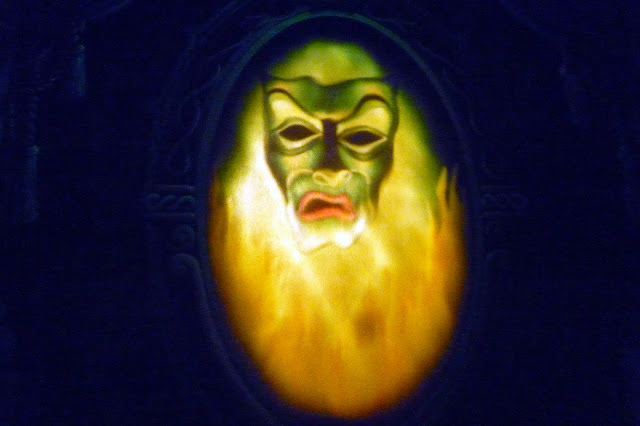 The ride continues into the dungeon where the cackling Hag stands over her frothing cauldron, poison apple in hand. The Queen's huntsman suddenly urges Snow White to run away and we escape into the dark forest. A thunder bolt flash reveals the princess, she screams as her dress gets caught by claw-like branches. The trees have eerie scowls and floating logs loom in the swamp like lurking crocodiles. Creepy eyeballs fill the shadows.

We hear the Dwarfs' "Silly Song" in the distance as we reach the safety of their cottage. 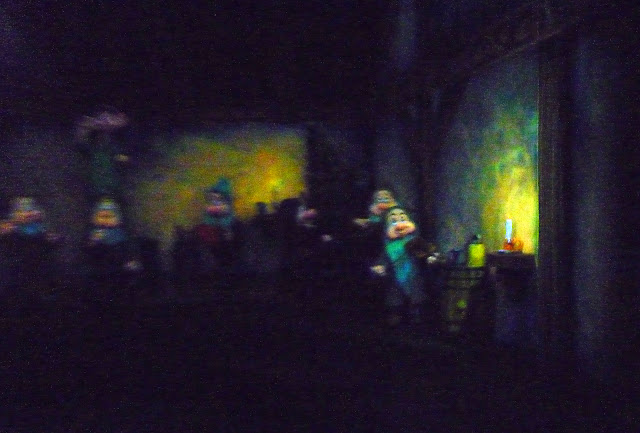 The refuge doesn't last long as we pass the Witch giving Snow White the apple, and upon exiting the cottage, hear her crowing that she is 'Now the fairest in the land'.

The ride heads into the Dwarfs' mine where we hear them calling out that the Witch is getting away. They head off in pursuit, scrambling up a rocky ledge. She stands upon a precipice over us and attempts to dislodge a boulder on our heads. But a bolt of lightning strikes and the Old Hag meets her demise.

It was at this point that the music kicked in--the finale reprise of Someday My Prince Will Come from the original 1937 film. The hairs on the back of my neck stiffened, and a chill ran up my spine.

We return to the forest where Snow Whites lies still on her bier. The prince is bending over the sleeping princess as he's about to kiss her. 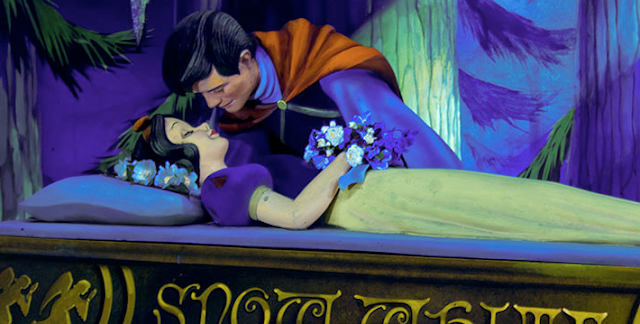 
In the final scene, we hear Snow White saying "Goodbye" to the dwarfs and us as she and the Prince head to their castle in the clouds. 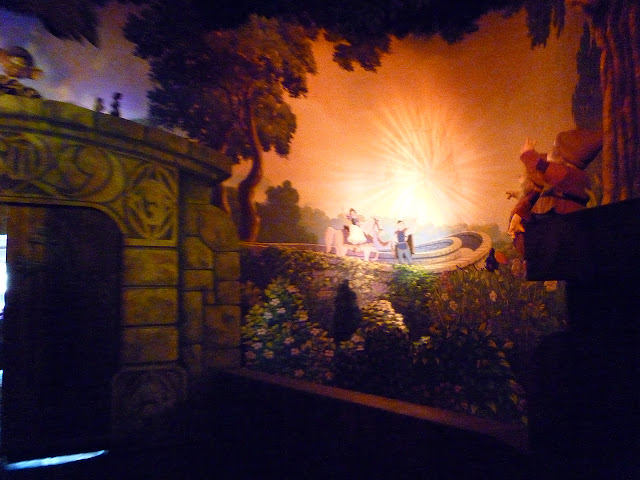 I don't know how to explain it exactly, but upon exiting the ride, I was in a bit of a quasi-daze. The imagery coupled together with the music had in a manner of speaking tapped into my inner circuitry. It was as if a light was suddenly turned on inside. This archetypal fairytale now had meaning for me, and the deeper symbolism of it all somehow made sense. 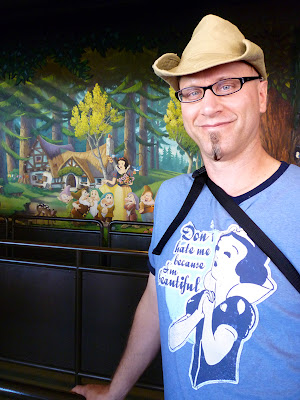 Nine years after the fact, the Snow White mythology continues to exert influence over me, hence the writing of a blog dedicated to Miss White.
Posted by Snow White Archive at 2:02 AM