When author J.B. Kaufman and Diane Disney Miller first came up with the idea for a book on the making of Snow White (The Fairest One of All), they weren't actually thinking about 2012 and it being the 75th anniversary of the film. It wasn't long, however, before the project led to not only a full-fledged art exhibition to mark the occassion, but a second book as well.

On June 12th of this year, the Walt Disney Family Museum issued a press release for their upcoming special presentation, Snow White and the Seven Dwarfs: The Creation of a Classic. In celebration of the diamond anniversary of the film, more than 200 original production works of art will be on display "including conceptual drawings, early character studies, detailed story sketches, and animation drawings."

Curated by Lella Smith, Creative Director of the Walt Disney Animation Research Library, the exhibits are "organized by sequence through the progression of the movie, featuring some never-before-seen works of art with behind-the-scenes stories about the film’s production." It opens November 15, 2012 and runs until April 14, 2013. 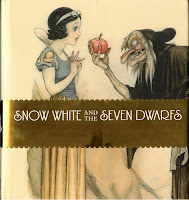 J.B. Kaufman authored the exhibition catalog, Snow White and the Seven Dwarfs: The Art and Creation of Walt Disney's Classic Animated Film (seen in earlier post). Not long ago, he answered a few questions about his own involvement with the museum...


FILMIC LIGHT: How did you come to be on staff of the Walt Disney Family Foundation and what is your role?

JB KAUFMAN: My original connection with the Foundation was a loose one and revolved around researching and writing an earlier book, South of the Border with Disney. The Museum was in the planning stage at that time, and as the plans evolved, I eventually became a staff writer for the Foundation, working on text panels for the Museum and other projects.

FM: Did the writing of your two Snow White books involve you directly with the development of the exhibition at the Museum?

JB: No, actually I haven’t had much involvement with the Snow White exhibition itself. I’ve attended some of the meetings and consulted from time to time, but that’s about it. Lella Smith, the Creative Director of the Walt Disney Animation Research Library, is the curator, and she and her staff, along with the Museum’s own curatorial staff, are the ones to be credited for this show.

FM: What can guests expect when they visit the Snow White exhibition?

JB: In the course of working on the catalog, I’ve had a comprehensive look at the art that will be featured in the show, and it’s a huge and amazing assortment. Some of it is drawn from the ARL, some from the Museum’s own collection, and some key items from the holdings of private collectors. People who really love Snow White will already be familiar with a few of these pieces, but there are also quite a number of exciting rarities that I don’t think have ever been displayed before. All in all, it adds up to an opportunity to immerse yourself in the art of this beautiful film.


View a PDF file of the promotional images released by the museum.


In conjunction with the Snow White exhibits, the museum also has a series of public programs planned including screenings of the film daily, a talk by J.B. Kaufman and Lella Smith, and even a 75th anniversary premiere party soiree of "glitz and glamour". See the program press release for the full listing of events and activities.

Museum Hours: 10am to 6pm, Wednesdays through Monday; closed on Tuesdays and the following public holidays: New Year’s Day, Thanksgiving, and Christmas.