The Goddess of Spring 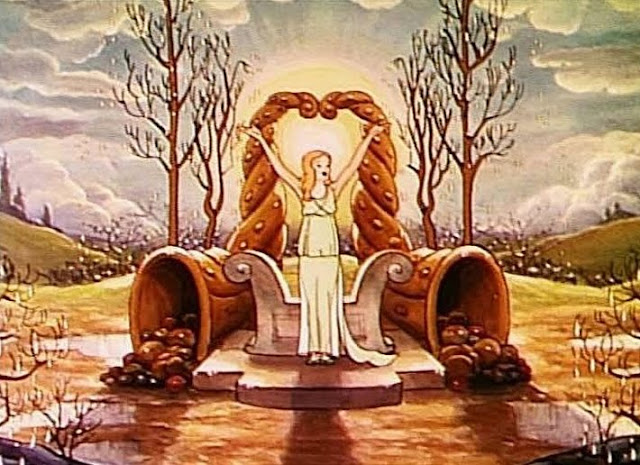 Image copyright Disney via The Encyclopedia of Disney Animated Shorts

What could be better than the Silly Symphony return of Persephone here on the Spring Equinox? It is well known that in 1934, three years before the release of Snow White and the Seven Dwarfs, Walt Disney's The Goddess of Spring served as a testing ground for his animators. Since they'd had only limited experience with drawing believable human characters, practice on Persephone would eventually lead to perfection--but not at first.

The characters were designed by Albert Hurter [the studio's first inspirational sketch artist], who suggested certain poses and gestures that the animators were not yet skilled enough to emulate. After realizing that a greater knowledge of anatomy was required in order to produce believable human animation, [Walt] hired Don Graham, who held anatomy classes in order to prepare the animators for their first feature.
Source: The Disney Wiki 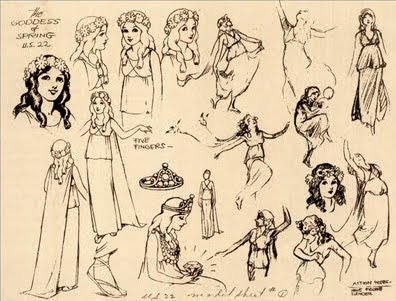 From Stephanie Stewart :
I just wanted to let you know that for the record, my Grandmother, Diana Gaylen, was the one who did the singing for this particular Disney short...It seems that they didn't give those kind of credits back then. Diana Gaylen was widely known in the 30's and 40's, for both her stage performances and her behind the scenes work in many movies singing for the stars. Anthony Adverse is one you might have heard of, she did the singing for Olivia DeHavilland. Source: The Encyclopedia of Disney Animated Shorts

Posted by Snow White Archive at 7:05 AM