The Disneyland Storyteller series were LPs that featured a single narrator along with the dialog, sound effects, music, and songs from the movie, all integrated to help to tell the tale. The attached storybooks were usually 10 or more pages in length, though the text did not follow the recorded audio. Disc size 12",  331⁄3 rpm. The original 1957 Snow White storyteller album--catalog no. ST 3906--featured Annette Funicello (see it in a future post).

The Disneyland Read-Along ("See, Hear, Read") series also featured a lone "story-reader". However, no other dialog, sound effects or music were incorporated into the recording. An attached 24-page book follows along with the audio recording, and a musical tone lets young readers know to turn the page. A song or two is included but only at the end, not as part of the story. Disc size 7", 331⁄3 rpm.

For a detailed comparison between the Storyteller and Read-Along series, see the excellent Kennetti Database by Kenneth Sundberg.

In 1966, the first Snow White "read-along" was released in the States. "Little LP" catalog no. LLP 310. The program was narrated by Robie Lester. Two songs were included on the second side--Heigh-Ho and Whistle While You Work. Here's Kenneth's synopsis of the recording...


The story concentrated too much on explaining the princess’ earlier years – which were told very briefly or just hinted at in the 1937 animated masterpiece. Towards the end of the record, the pacing got significantly faster, and yet the story managed also to include the famous deleted bed-building scene! Even though the evil Queen's deadly jealousy was explained thoroughly in the beginning, the story's more dramatic elements – the frightening forest, the Queen's transformation into the Witch, the poisoning of the apple, and the Witch's encounter with Snow White – were dealt with in very few words. The Witch's death was taken from the early rejected concepts of the movie, in which she just ran away from the Dwarfs' cottage, fell from a cliff, and "was never seen again".

Pictured on the green album cover is Snow White, the Seven Dwarfs, and the Prince. Hold on! Disney tried to pull a fast one on us. That looks much more like Prince Phillip from Sleeping Beauty than the Prince from Snow White. 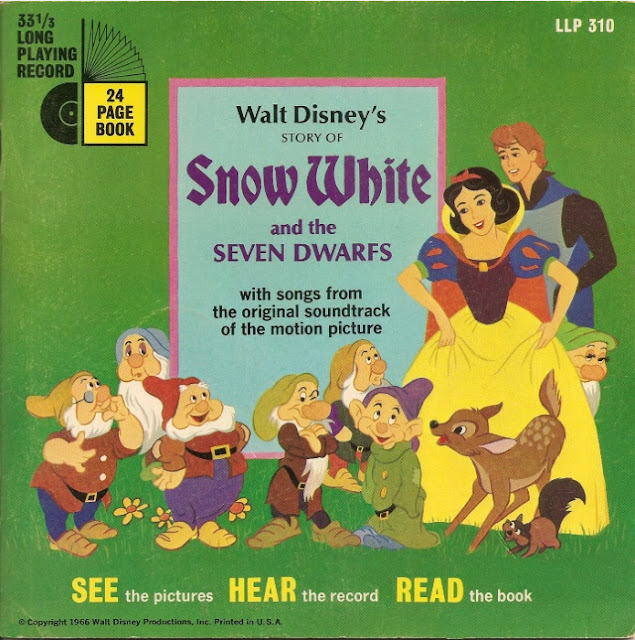 This record was reprinted many times. The front cover artwork remained the same, though later printings added, "A Disneyland Record and Book" across the top. Printings in the mid 1970s dropped the "LLP" from the catalog number. And still another at this time switched the 1966 copyright along the bottom to Roman numerals. 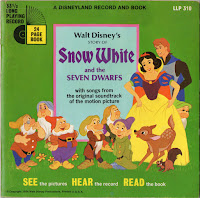 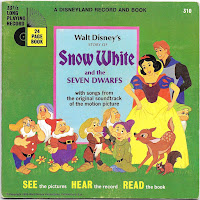 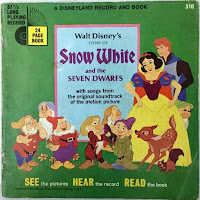 
The first rear cover design (left) did not mention Robie Lester by name. In another printing (right), she is credited. 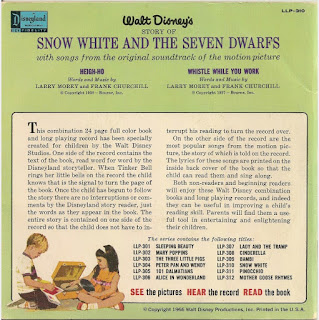 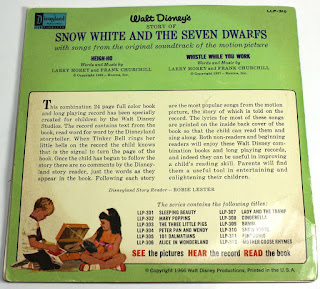 A later rear cover design picturing the record disc became the standard for most printings. Some had no copyright markings. Others included the year of issue or manufacturer fine print. 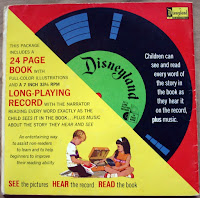 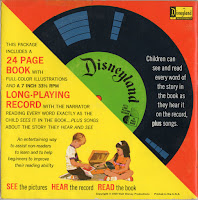 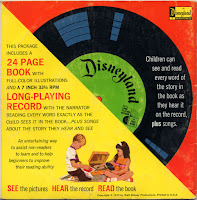 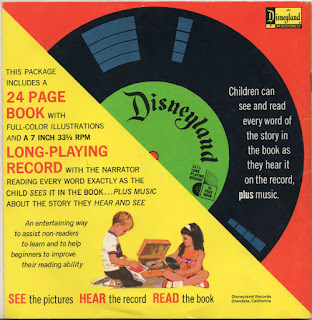 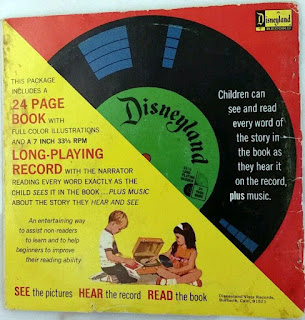 There were many variations in the disc labels too--usually green with dark lettering. Robie Lester is credited as the Disneyland Story Reader. 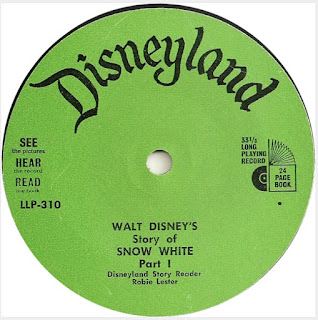 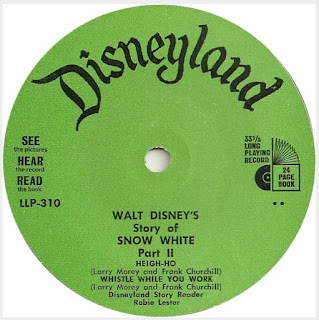 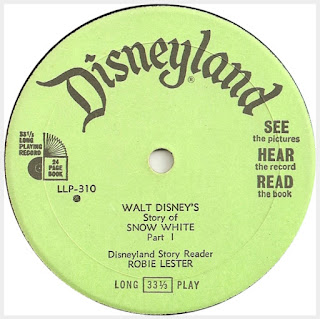 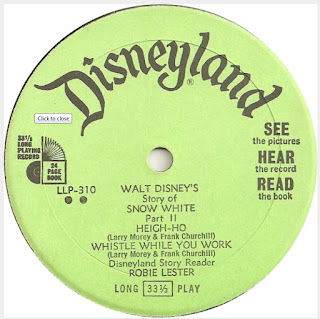 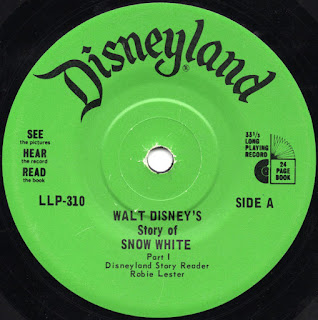 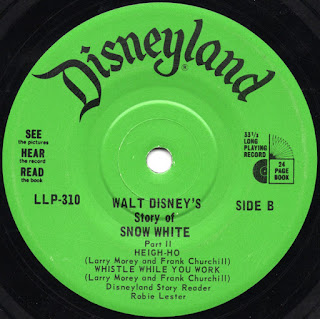 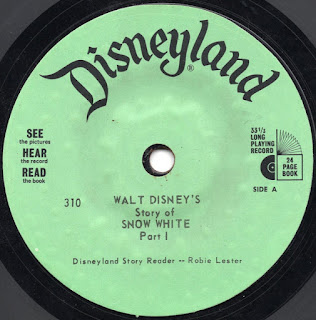 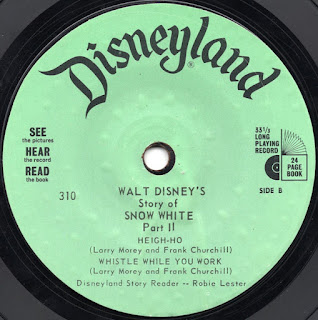 The rainbow reprint label has also been seen.

The illustrations were taken from the Snow White Little Golden Book published in 1948 by Simon and Schuster (printed by Western Printing and Lithographing Company). Hence the reason for 1948 copyright at the beginning of this storybook. 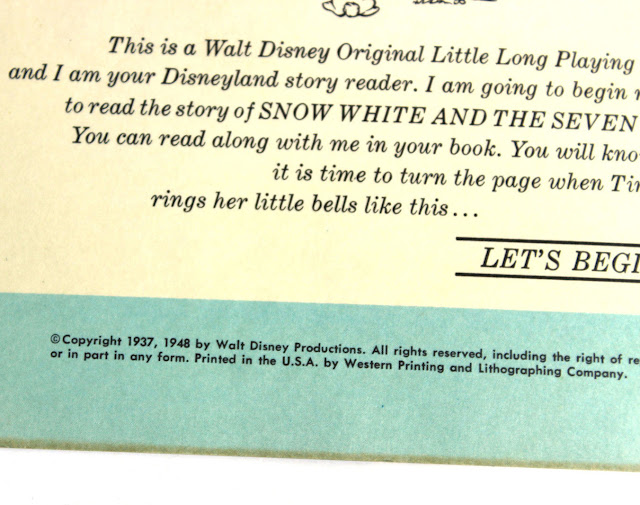 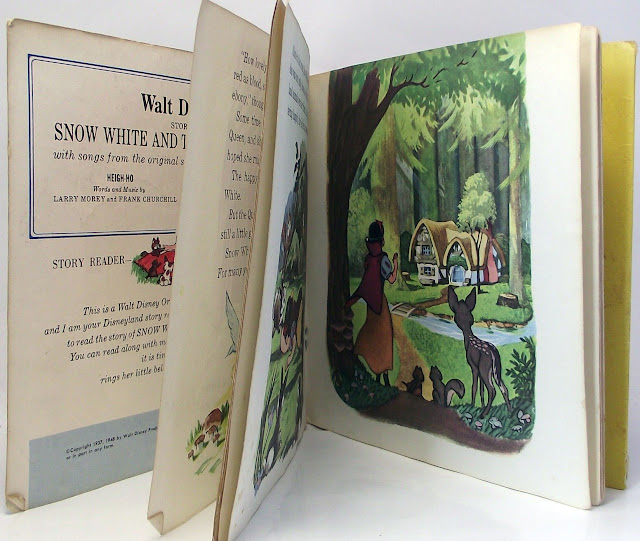 Some editions had numbered pages, others did not. 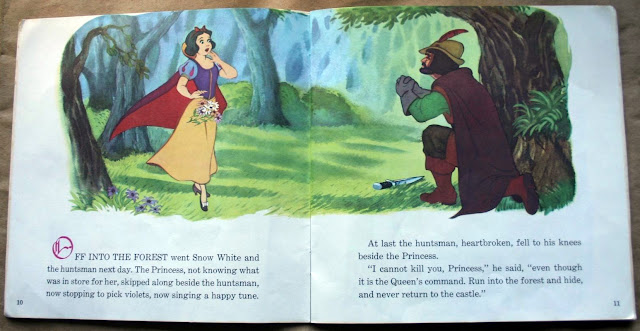 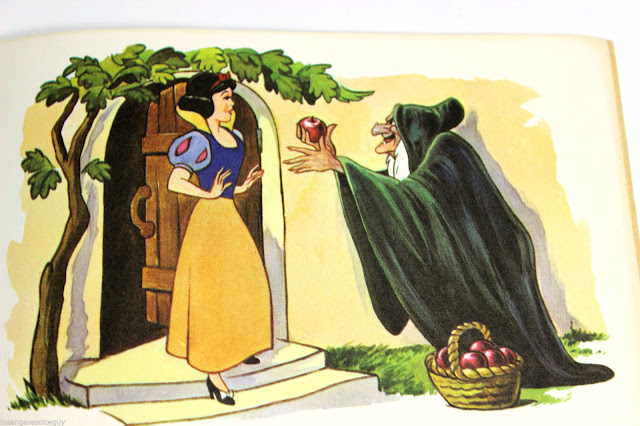 
Listen to the entire story...

This record and book were repackaged with new album cover artwork in 1977 (seen in an upcoming post). Robie Lester also narrated the 1966 Seven Dwarfs and Their Diamond Mine record (another Archive entry).
Posted by Snow White Archive at 12:01 AM