The Boy Who's Experienced the Scary Adventures Nearly 3200 Times! (part 4)

Ben's 3K ride on Snow White's Scary Adventures occurred January 9th, 2010. He had just recently turned 16. The following comments are from a series of email correspondences with his father Ron:


Nothing terribly exciting happened for the 3,000th ride. It was a miserably cold day, and the cast member who was supposed to be arranging something wound up leaving the company before it happened and the hand off to a different cast member got botched. I'm not upset about that at all, Disney has done so much for my son over the last decade that I am certainly not going to complain about one day in the park. 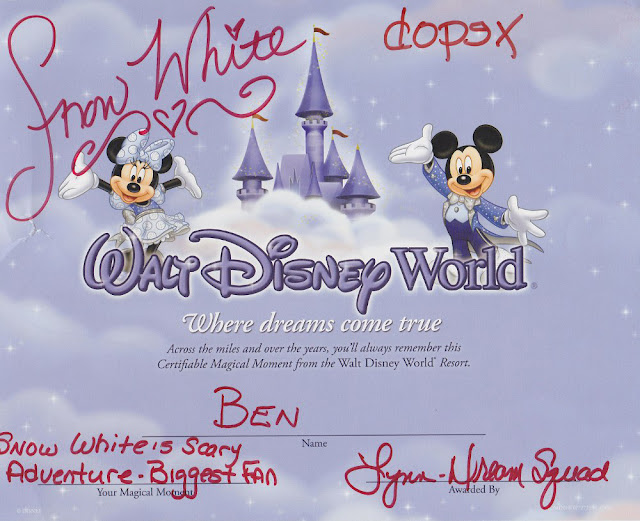 Certificate Awarded To Ben For His 3000th Ride, signed by Snow White and Dopey.

Initially when we moved out here [from Seattle to Orlando] we were in the park with him as much as three days per week. Seven years later, it is more like three times per month.  He still loves going, but it's not the obsessive level that it used to be and that's a good thing.

In any case, now when we go to the park he is actually interested in going to the other areas. Where he used to refuse to step outside of Fantasyland, now he will go pretty much everywhere in the park. His time there has taught him how to deal with crowded areas without getting stressed out, how to shop in stores and pay for things, how to politely ask for help when he needs it, and who knows how many other skills. I am doubtful that he will ever be able to live on his own, but Disney has enriched his life in so many practical ways I can't even begin to thank them enough.


Two photos of Ben with Snow White and all seven dwarfs from Mickey's Not So Scary Halloween Party 2007...


A shot of Ben looking at his absolute favorite part of the SWSA ride. There was a full e-stop on this particular day, and when the lights came on, Ben and his dad happened to be at the right place at the right time. Again, from Ron's email...


He has a print out of that same photo in his picture album that he carries with him, and it is his favorite one to look at. It's because of the dialog that happens right there as you pass by.

He absolutely loves that "Hurry!"


Frankly, I would pay good money to get my hands on the discreet audio elements from that ride. There are tracks like that from Haunted Mansion floating all over the web, but not from SWSA. If I could load up his iPod with all of the sound cues from SWSA, he would be in absolute heaven. 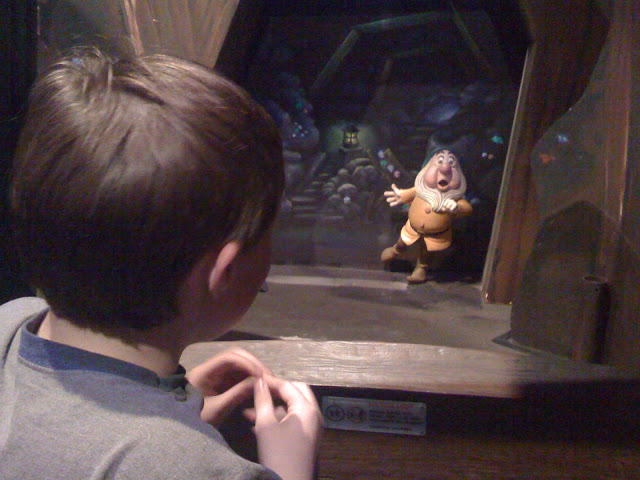 Ben Looking At His Absolute Favorite Part Of SWSA


A few years ago when they did the last major rehab and it was closed down for a few months, one of the cast members actually walked the ride path with a camera and took detailed pictures of the entire ride for us so that Ben could have a photo album to look at while the ride was unavailable.  He *still* carries that photo album around with him everywhere. 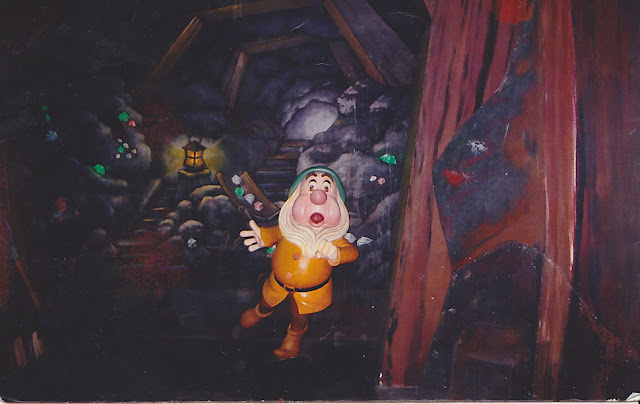 He has another version of [the above photo] on his iPhone. I gave him my old phone but crippled the phone itself so it is basically an iTouch. He will pull up that picture, look at it, then look at me and wait for me to say "Awwww, she's getting away!" at which point he replies, "Hurry!"

A recent photo from November 2010. Walking through the park with his father, Ben spotted Snow White and asked to go see her... 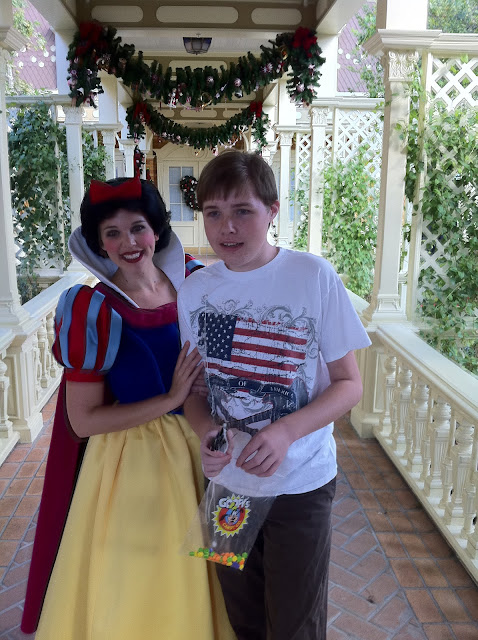 Ben With His (And My) Favorite Disney Character


And finally a recent email from Ron...

SWSA is still the first place Ben wants to go whenever we go the park, and he always rides it at least six times per visit. The rule is that he can ride it three times in a row and then he has to go do something else. He used to stay in Fantasyland and just run over and ride Pooh or Dumbo quickly and then go back to Snow White, but nowadays he tends to want to go ride either Pirates or Haunted Mansion before going back.

So just what is Ben's current ride total? As of this past Christmas weekend, he is up to 3,159 rides on SWSA. Congratulations Ben on a remarkable achievement!


I can't thank enough Ben, Ron and Sara for their willingness to share their story, and to Ron in particular for his patience with my numerous inquiries. The above account and images are from email correspondences with Ron. Used with permission. Visit his blog at shmoolok.com.

The story continues with a series of 2012 Archive entries that lead up to Ben's very last ride on the Scary Adventures.
Posted by Snow White Archive at 2:05 AM