Kay Kamen - The Growth of Disneyana 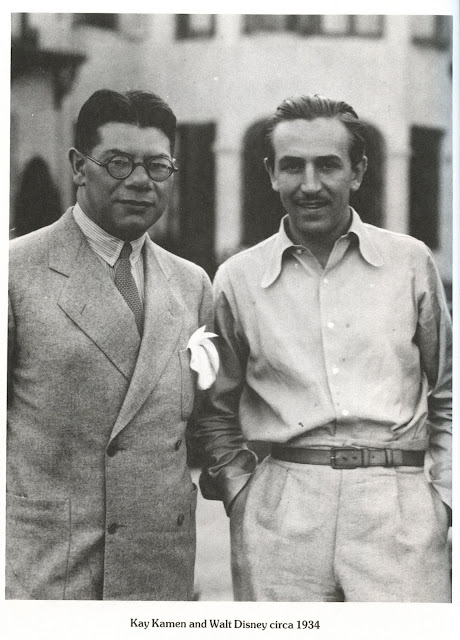 
From 1932 to 1949, Kay Kamen was the marketing champion, the merchandising king. It was his brilliant ingenuity and creative licensing ideas that brought to the Disney Studio millions of dollars--which of course were in turn used to help fund its many grand projects. The products and promotional materials created during this period are today some of the most cherished vintage Disneyana collectibles to be found.

During the Great American Depression of the 1930s, while U.S. President Herbert Hoover promised a chicken in every pot, Kay Kamen promised a Disney character in every home. A stickler for quality, he set an unprecedented standard in licensing Disney character merchandise--books, music, plush toys and more--and subsequently, helped transform Mickey Mouse, and other Disney characters, into megastars.
Source: Disney Legends 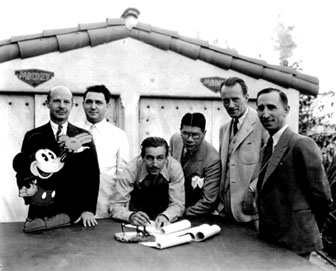 Herman "Kay" Kamen was born January 27, 1892. Some 40 years later, he had built up a successful advertising, public relations and promotions company which in 1932 was based in Kansas City, Missouri. It was in this year that he would meet face-to-face with both Walt and Roy Disney. They must have been impressed, because on July 1, 1932, they granted Kamen his first contract. It wouldn't be long before he would become the company's exclusive licensing representative and splitting profits 50/50 with the Disney brothers.

The first Mickey Mouse watch, produced by the Ingersoll-Waterbury Clock Company, was one of his most lucrative deals. Introduced and featured at the Chicago "Century of Progress" World's Fair in 1933, the Mickey Mouse watch is credited as saving Ingersoll from bankruptcy. Considering that 1933 is recognized as the worst year of the Great Depression, this was an amazing achievement. Source: squidoo. 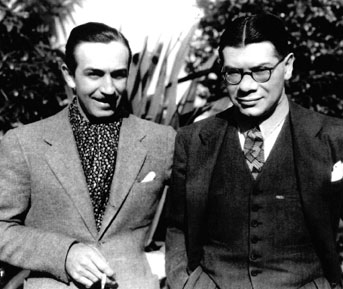 In 1934, Kamen began to circulate a catalog filled with Disney products, particularly items featuring Mickey Mouse. The second Mickey Mouse Merchandise catalog (below) was published in 1935... 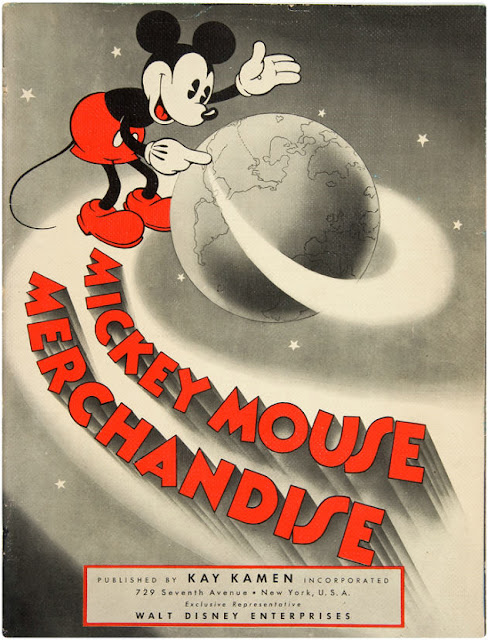 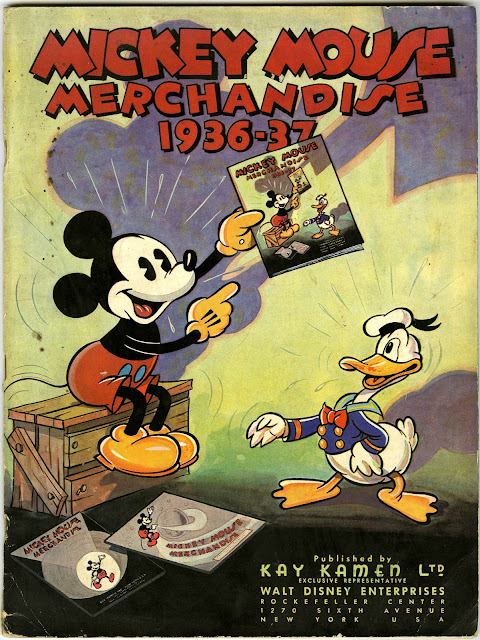 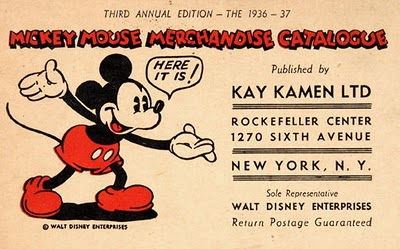 Image from Hake's Americana and Collectibles.


By the time catalog number five was issued in 1938, the emphasis had shifted. The publication was no longer referred to as Mickey Mouse Merchandise but rather the Walt Disney Character Merchandise catalog. Filled with all types of Disney products, particular attention was now being given to items featuring Snow White and the Seven Dwarfs. 98 pages, color covers, black and white interior photos... 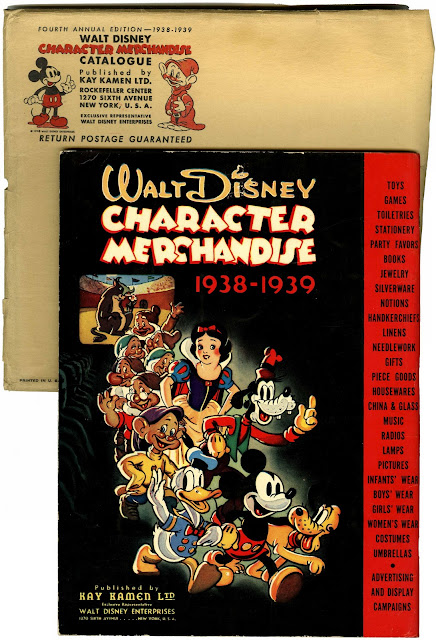 Kamen devised and instituted marketing campaigns that ensured Disney toys were featured dominantly on the shelves of the nation's leading retail outlets. He even went so far as to design and publish elaborate Christmas campaign manuals that provided retailers with complete merchandise plans for the holiday season.

1938 two-sided "Toy Town" Dwarf banner to be hung in stores during the Christmas shopping season... 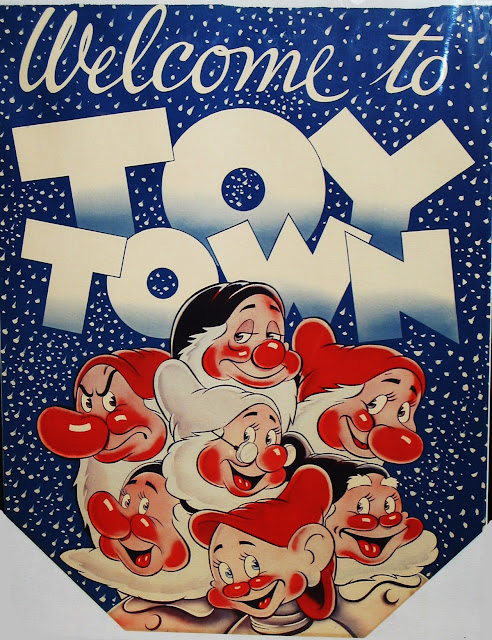 
Anticipating the great appeal of the movie, Kay Kamen granted some seventy licenses to corporations for the production of a variety of goods with the Snow White stamp--clothing, food, toys, books, cutlery, phonograph records, and a host of others.

Large department stores in nearly every major city put together promotions of toys, books, and clothing in ground-level display windows. Companies were eager to get in on the action.

The business journal Dun's Review concluded in April 1938 that the symbiotic process ("the picture promoted the sales of goods; the likenesses on the merchandise enhanced the popularity of the picture") had made Snow White a "dramatic example of a new force in merchandising."

Excerpts from The Magic Kingdom: Walt Disney and the American Way of Life by Steven Watts. Pages 161-162.

Kay Kamen continued his association with the Disney brothers for over 17 productive and lucrative years. 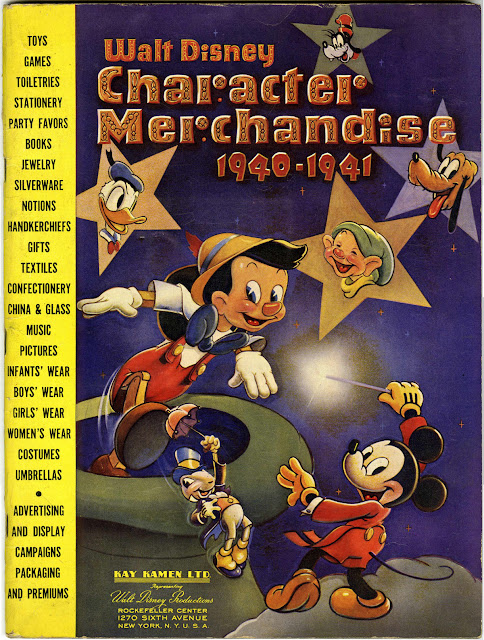 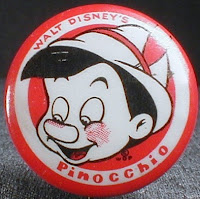 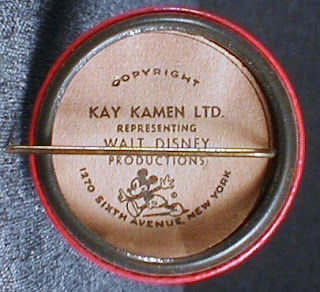 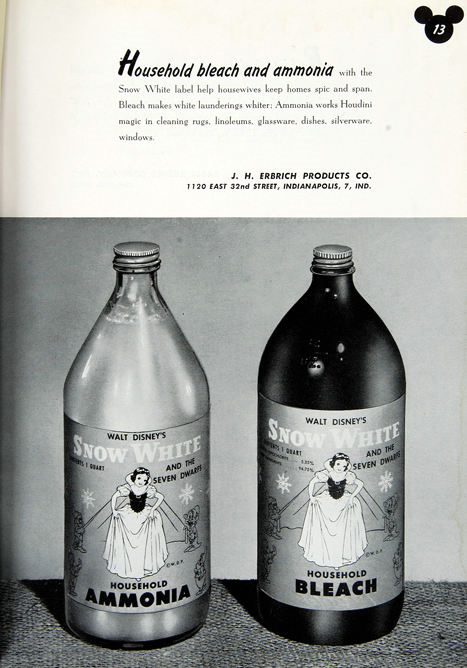 Kamen was working on the promotion of Cinderella merchandise when a terrible accident cut short his life. It was October 28, 1949 that he and his wife were passengers on an Air France flight to America. But they never made it home. The airplane crashed into the Azores and all those aboard were killed. It was a tragic and sad end of an era. 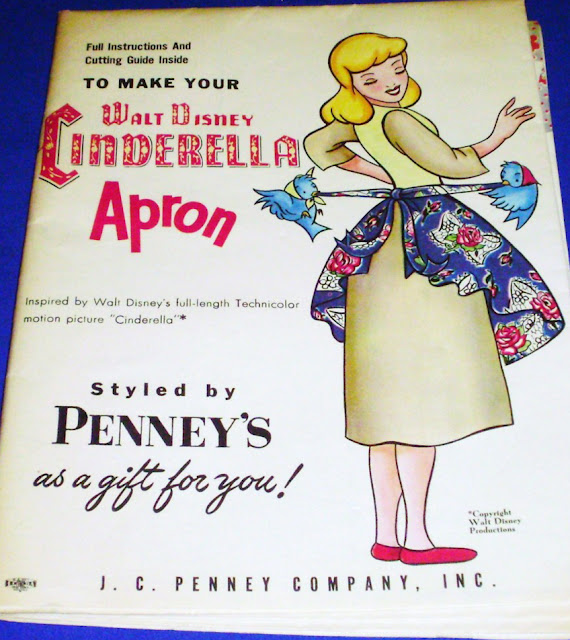 J.C. Penney Cinderella Apron Pattern, circa 1950.
Image courtesy of The Tinman's Treasures. Used with permission.
Posted by Snow White Archive at 12:04 AM