The Boy Who's Experienced the Scary Adventures Nearly 3200 Times! (part 1)

There are rumors that as part of the Fantasyland expansion now going on at Walt Disney World, the corporate heads are going to gut Snow White's Scary Adventures ride--possibly turning it into a princess "meet and greet" location or something other than what it is now. This seems an almost unbelievable idea. How could such a thing actually happen? SWSA at WDW has its roots in the original ride that Walt personally OK'd and opened at Disneyland back in 1955. It's a historical classic on par with Peter Pan's Flight. Fifty years from now, many things will have come and gone at Disney theme parks, but Snow White's Scary Adventures should not be one of them. The thought of there no longer being a SWSA at WDW literally make my stomach turn. Especially when you consider the following story...

Ben was born in 1993. By the time he was 9 months old his parents, Ron and Sara, started to think that maybe something wasn't quite right, and by 12 months they were positive. At 14 months he received his first official diagnosis of PDD-NOS (Pervasive Developmental Delays - Not Otherwise Specified), and later the diagnoses was updated to Autism.

Ben has always been fixated on videos and sound, and in particular he loves Disney videos. He will almost never just sit and watch a movie. For him, he will sit with a remote and watch the same 4-5 second clip over and over again, almost always a clip with some distinctive audio element like a scream or a whistle. His first spoken words didn't come until he was about 8 years old and that was to sing along with The Bare Necessities.

In any case, Ben loved Disney videos so much that eventually his parents decided to try taking him to Walt Disney World. Now they lived in Seattle at the time so it was going to be a pretty difficult trip to fly him across the country. Ben would either absolutely love it or it would be a complete disaster.

That first day at the park, as soon as they walked through the turnstiles and onto Main Street, his parents saw an amazing change in him. Ben recognized the castle and all the shops from his videos. He got a huge grin on his face and he was looking at everything.  Ron had never seen him so focused and so present in his entire life. 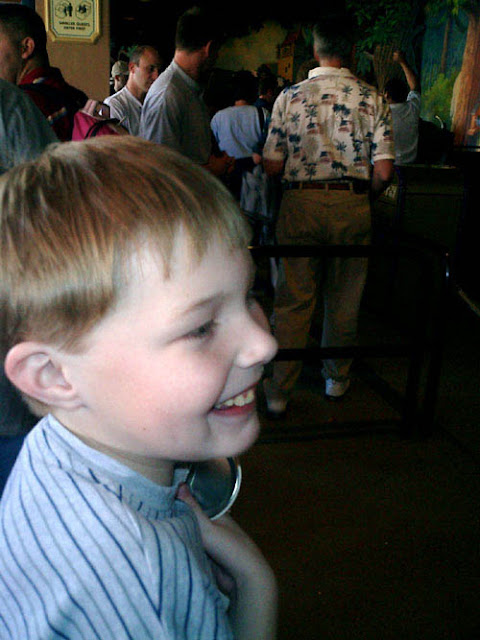 As it turns out, the very first ride they took him on was Snow White's Scary Adventures. It was one of his favorite videos and it seemed pretty tame. This was back in the spring of 2002 when Ben was 9 years old. He didn't understand what was happening, the line was very confusing to him, "but as soon as we got in the mine cart and the ride started, he was mesmerized."

Ron has given it a lot of thought, and he thinks the reason that SWSA in particular appeals to his son is because of the audio cues on the ride. It is one of the few rides at WDW where 100% of the audio is lifted directly from the movie's soundtrack. Other rides use the same score but with different recordings and with different voice actors. SWSA is 3 1/2 minutes of pure, concentrated Snow White audio elements. As Ron puts it, "It's basically Benjamin Crack."

On that first visit, Ben, Sara and Ron were there for four days, two of them spent at the Magic Kingdom. Ben went on other rides and liked them well enough, but it was SWSA that he kept wanting to go back to. His parents took pictures of the different ride entrances so Ben could show them where he wanted to go, and by the end of the trip he was actually naming the rides. Bear in mind that prior to that point Ben was almost entirely non-verbal, yet here he was pointing at pictures on the camera and saying, "Snow White! Haunted Mansion! Pirates!" It was truly an amazing and life changing experience. 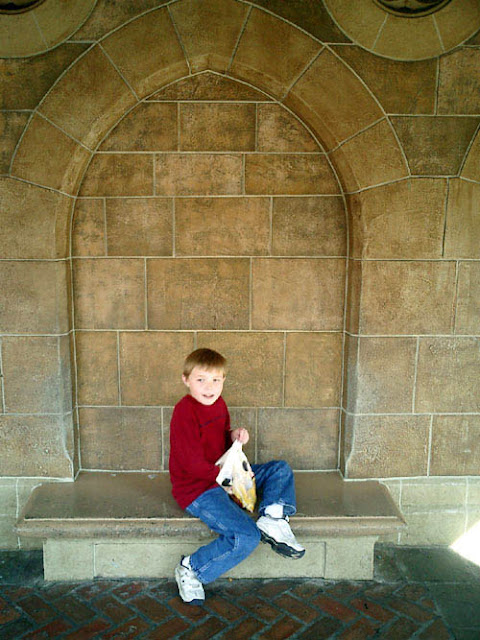 After returning home, Sara and Ron started talking about it. They were actually divorced by this point, but whatever their differences, they'd always agreed on what was best for Ben. Both felt that what they'd seen in Ben at WDW was truly remarkable and that the park was their best hope for really drawing him out. They went back for a second trip in early 2003, and when they saw the same reaction from him again, they made up their minds to move.

So in the summer of 2003 Ron and Sara both pulled up their stakes and moved cross-country from Seattle to Orlando for the express purpose of using Walt Disney World as one giant therapy session for their son.


The above account and images come directly from email correspondences with Ben's father Ron and from Ron's blog. Used with permission.
Posted by Snow White Archive at 2:10 AM