Everybody Loves Gustaf...or do they? 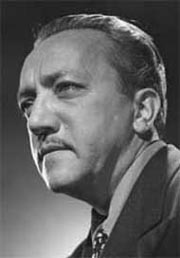 Of all the drawings, sketches and artwork to spring from the production of Walt Disney's Snow White and the Seven Dwarfs, there's probably none more recognizable as those pieces created by Gustaf Tenggren. Right smack in the heart of the Golden Age, Gustaf was there, one of the chosen few to be employed at the top animation studio of the day. Yet, his time at Disney wasn't necessarily all fairytales and happy endings.

Tenggren was born November 3, 1896 in Magda, Sweden. When his father moved to the United States to find work, Gustaf was left in the care of his grandfather, Teng Tenggren, a painter and woodcarver. The arts were encouraged and in 1913, at the age of seventeen, Gustaf won a scholarship to the Valand School of Fine Arts.

By 1918, he had married (his first wife, Anna Peterson) and was being paid to create illustrations for a Swedish folklore and fairy tales compilation called Bland Tomtar och Troll (Among Gnomes and Trolls). Over the next decade, he would continue to contribute artwork to this annual, even though in 1920, he (and Anna) would immigrate to America to pursue his career as a illustrator. 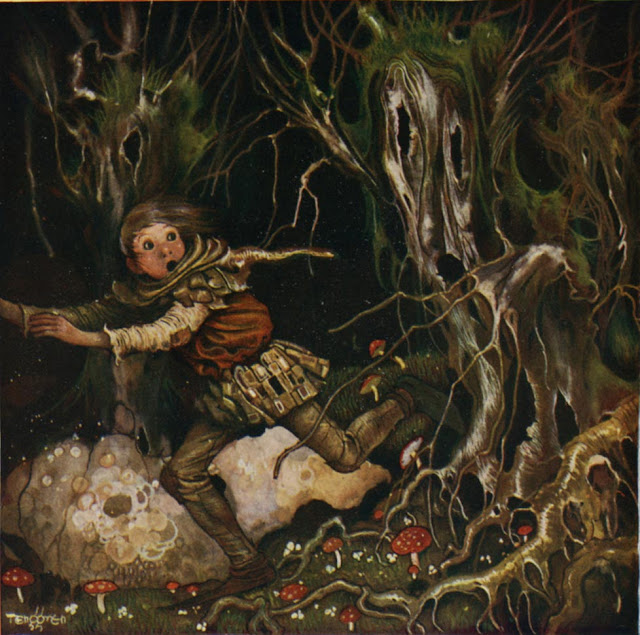 
As Emanuelsson points out in regards to the similarities of the above image to that of the later Snow White Dark Forest scene, "I think it's pretty obvious where the inspiration came from." Tenggren settled first in Cleveland where he lived for a couple years. This photo below (also from Lars Emanuelsson via Didier Ghez's Disney History) shows Gustaf around age 25 playing chess with an unidentified man. 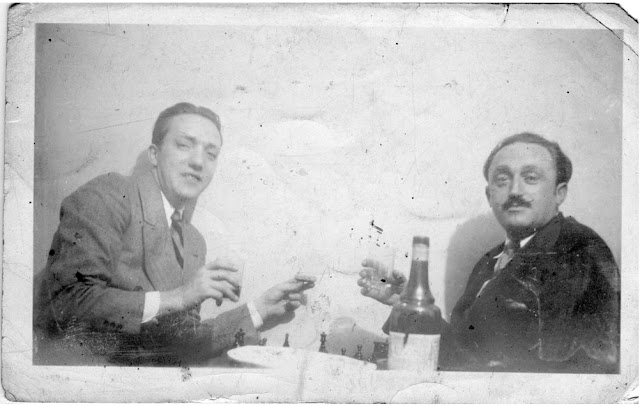 Gustaf relocated to New York City where things really started to take off career-wise. He found work as a successful illustrator of children's books as well as in some commercial advertisement jobs for magazines. 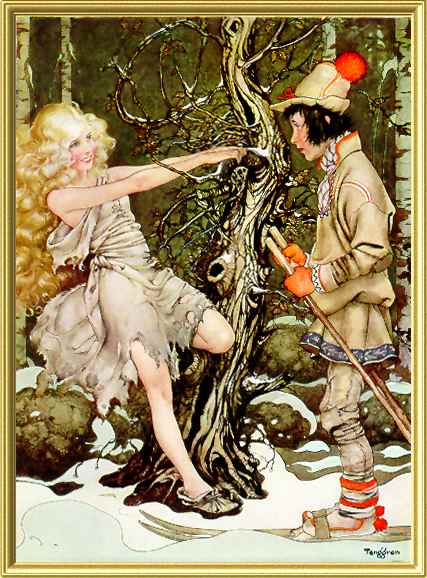 Book Plate from Sven the Wise and Svea the Kind, 1932. Image via BPIB.

The early 1930s saw Tenggren re-married (to Mollie Froberg) and living a rural farm life in upstate New York. By 1935, however, they'd moved back to the city where Gustaf was about to accept what would be for many, the job of a lifetime.


Tenggren was steeped in the German and Norwegian folk tales (and their illustrators) from the 1800s. His work also showed similarities to fellow Swedish painter and illustrator John Bauer (Gustaf's predecessor at the Bland Tomtar och Troll annual), and both were influenced by English book illustrator Arthur Rackham. It so happens that this was the style--this old European storybook feel--that Walt Disney was looking to infuse into his first feature.

Gustaf accepted the position of an Art Director on Snow White and moved to California. He took his place as a Disney Studio inspirational and concept artist, alongside the likes of Albert Hurter, Ferdinand Horvath, and Joe Grant. These guys were the dream team. Their job was to create artwork that would inform the animators and layout artists on how the characters, scenes and/or backgrounds should look.


As Lars Emanuelsson states on his website, Tenggren's drawings and paintings...

...had a major influence on some central scenes, such as the interiors of the dwarfs’ cottage, the queen’s laboratory, and the scenes in the woods where Snow White flees from the hunter. 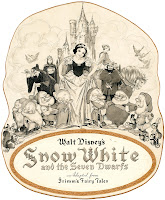 Gustaf's Snow White artwork made such an impression that it was--and still is--used time and again in countless promotional items, posters, book illustrations and merchandise. The cast portrait, the Witch at her cauldron, Snow White and Prince on horseback--see all these and more in the one sheet and 40x60 movie posters, the British F.O.H. cards and North American lobby cards, the Valentine and Sons postcards, Cynthia Rylant's 2009 book, the vintage Roma tea tin and even the Disneyland dark ride.


More images from his elegant and distinctive concept art portfolio. 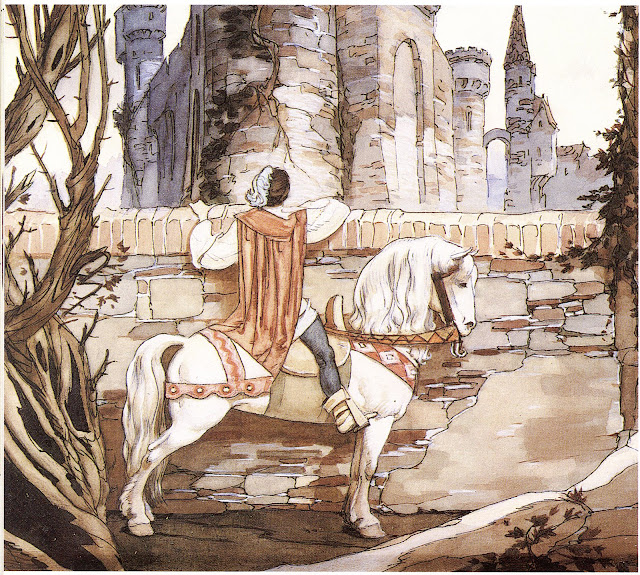 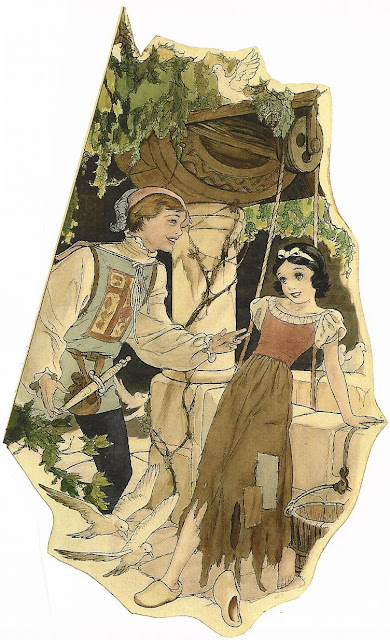 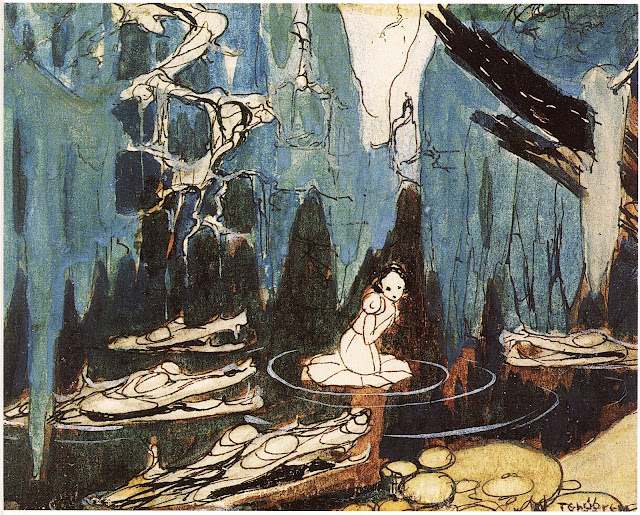 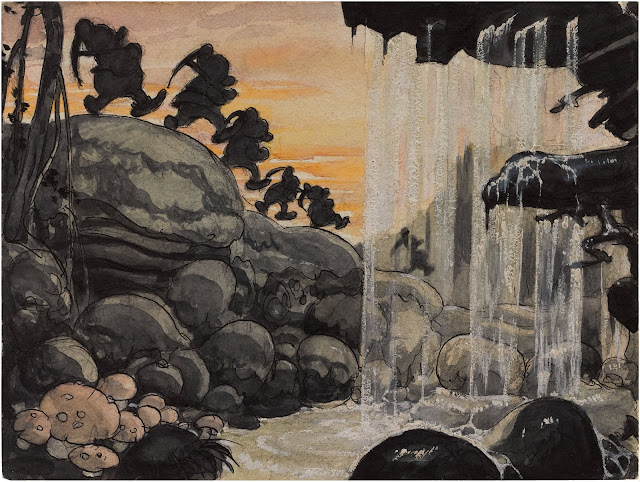 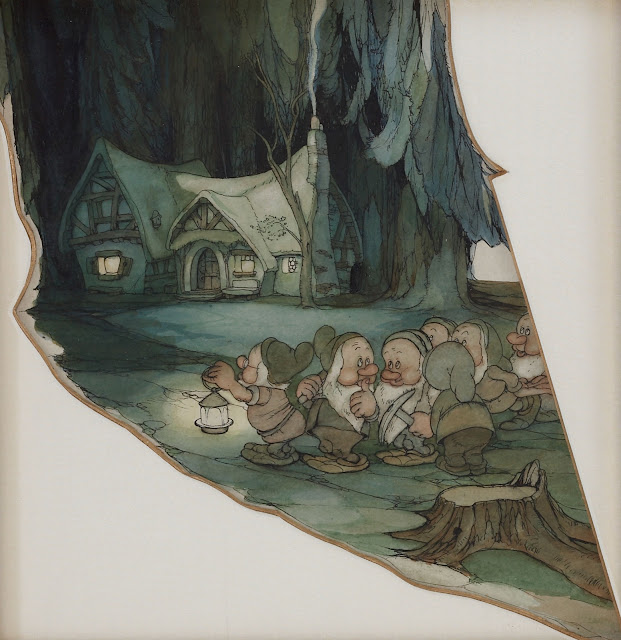 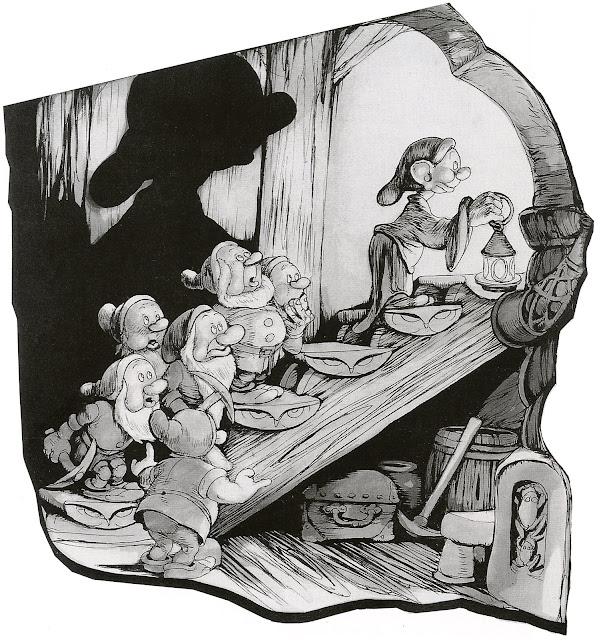 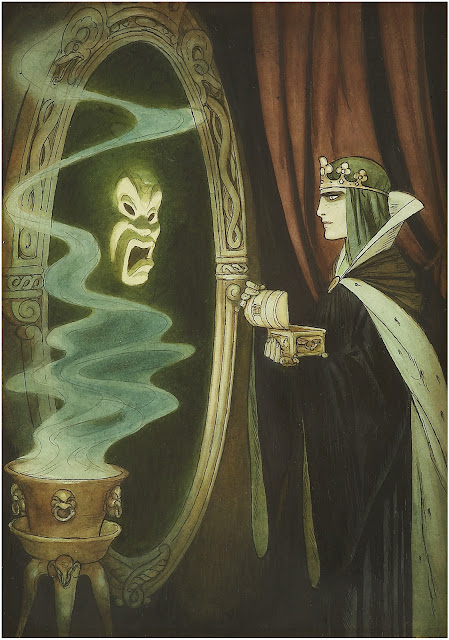 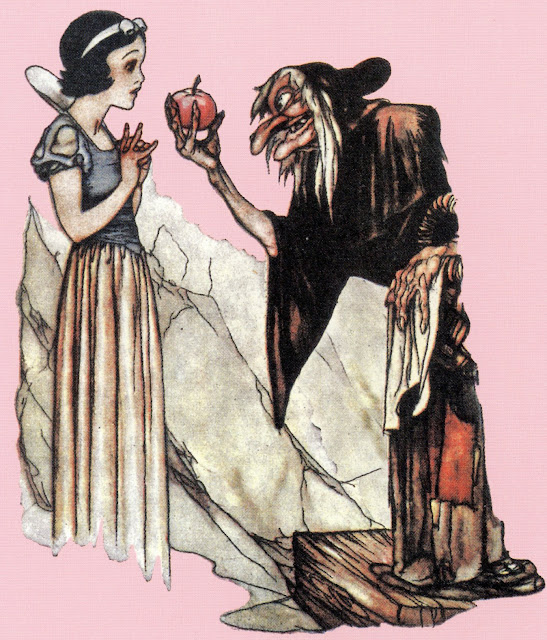 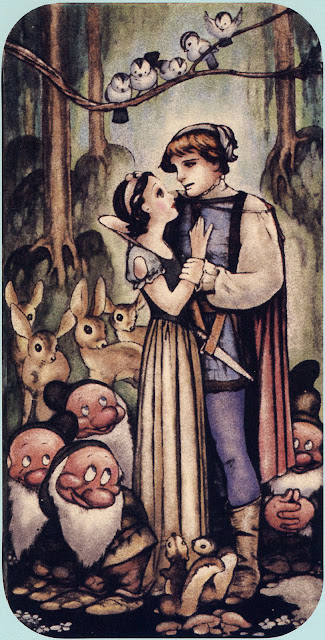 It is sometimes mistakenly thought that Gustaf did not receive any screen credit for his contributions to Snow White. Yet, he is indeed listed as one of the Art Directors at the start of the film. Both Albert Hurter and Joe Grant were mentioned as Character Designers. It was Ferdinand Horvath that, sadly, was left off the list.


In between feature projects, Tenggren contributed to the Silly Symphonies, specifically Hiawatha, The Ugly Duckling, and the Academy Award-winning The Old Mill. 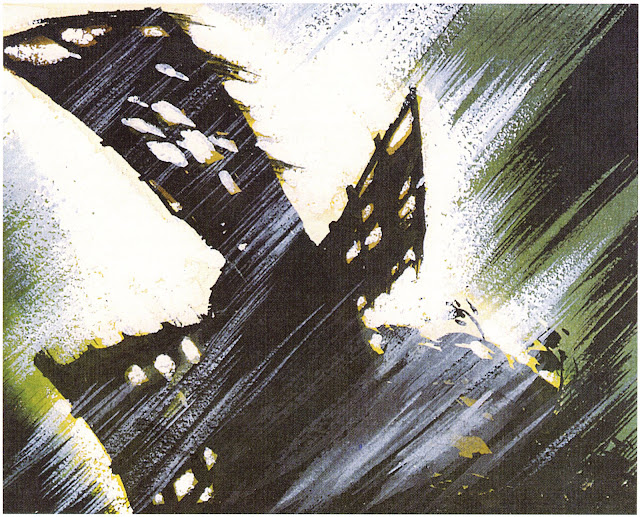 
Gustaf's greatest influence upon the Disney canon is in Pinocchio where his mark is seen throughout the film, in the design of the buildings and streets, the sign posts and lamps, and in the characters themselves. 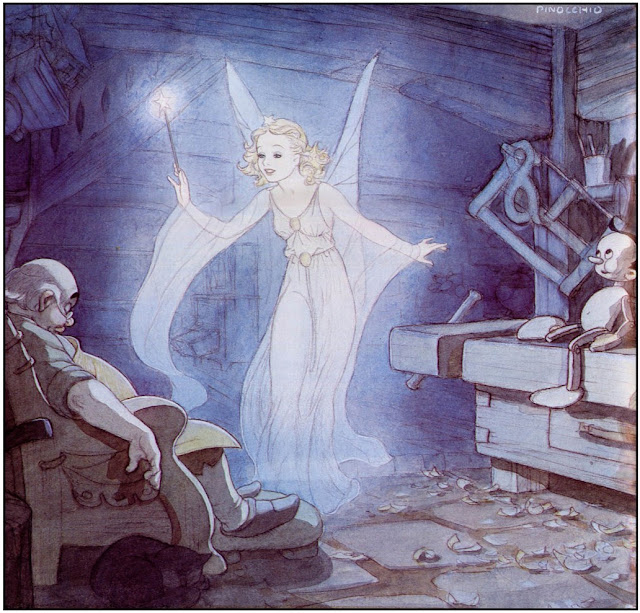 
His last Disney project was Bambi. Tenggren would head out to Yosemite National Park where he'd set up his easel and paint some most spectacular renderings of the forest...too spectacular as it turns out. Years later, Frank Thomas was quoted as saying...

He did some amazing pictures. They were different than anything anyone else was doing. And they were impossible to use.  Before the Animation Begins, Canemaker, p41.


The paintings were so detailed that they took three days each to create. The movie would have taken forever to complete. So Walt moved the look of the film in a different direction. 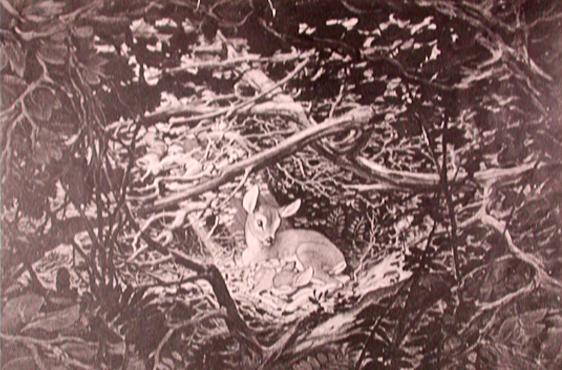 Tenggren working on Bambi, circa 1938.

Much has been said about the conflicts and controversies surrounding Gustaf Tenggren and his relatively short tenure at the Disney Studio. He was not liked by many of his animator colleagues. They complained of his aloofness and apparent arrogance. Yet, others said he was cooperative, just not sociable. This need by Gustaf to be left alone is not so reprehensible, but then there was the drink.

He had a real alcohol problem which at times may have resulted in muddled thinking and behavior. He was also known to be a philanderer from which a bit of a scandal developed. Animator Milt Kahl about blew a fuse when he learned that his underage niece (working a summer job at the studio) had gone camping alone with Tenggren on one of his Bambi excursions to Yosemite.

It may have been this last incident, or a combinations of factors, but something motivated Gustaf Tenggren to leave his employment with Disney in January of 1939. There must have been hard feelings within the studio ranks. A year later, when Pinocchio was finally released, Tenggren's name was nowhere to be found on the picture that he'd contributed so much to.

The Tenggren Books and Golden Books: 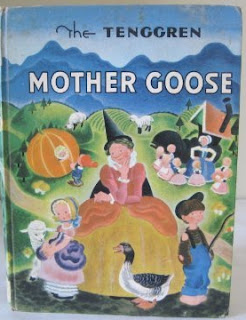 Gustaf was not idle in his post-Disney years. Just the opposite. He began to develop his own trademark line called The Tenggren Books. The first in the series was The Tenggren Mother Goose, published in 1940. 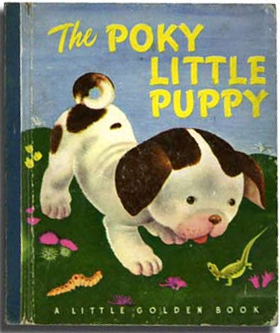 He also struck up his long-running relationship with Golden Books. For the next 20 years, he would illustrate a whopping 25 titles. This included the most printed of all, The Poky Little Puppy, first published in 1942.

Gustaf had one last encounter with his Disney (and even Snow White) past when in 1956 he illustrated the cover of The Saturday Evening Post. The My Dad Walt Disney piece attributed to Diane Disney Miller appeared in the November 17th issue. 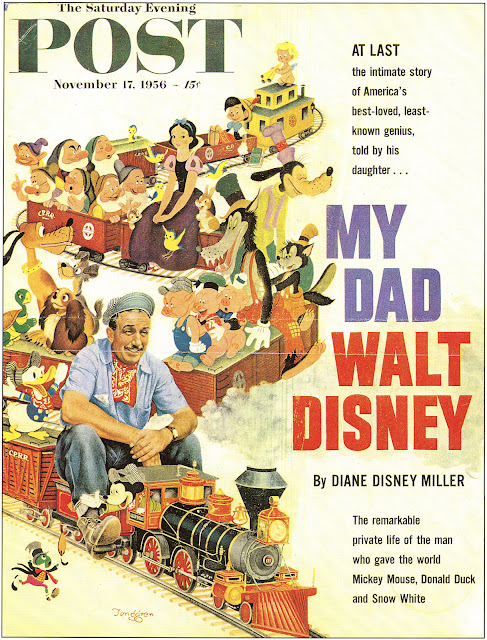 Saturday Evening Post, 1956. Image via Before the Animation Begins, p. 48.

Gustaf and Mollie moved to Maine where he continued to work on his artwork almost until his death from lung cancer in April of 1970. His collection of paintings and illustrations were later donated by his wife to the University of Minnesota.


The conflict of egos experienced between Gustaf and his colleagues was not an isolated incident at the Disney Studio. Stories of controversy between other artists exist as well. It was a time of tremendous advancement in the world of animation. It was also the Great Depression. The stress of keeping the studio financially afloat was a real concern. The pressure to produce was intense. Yet through it all, illustrious artwork was the result. No matter how the other animators--even the staunchest of adversaries--may have felt about him personally, they couldn't deny their admiration for Gustaf Tenggren's artistic contributions to the Golden Age.
Posted by Snow White Archive at 12:01 AM