It was early 1938 and Disney's Snow White was breaking ticket sale records around the world. Interest in animated films was piqued. Even stalled projects such as Gulliver's Travels at the Fleischer Studios were now being green lighted. So it was in this atmosphere of great excitement and hope that a young woman named Mary Ford wrote the Disney Studio to apply for a job as an animator.

She would received a letter back, dated June 7, 1938, but the rest of the world wouldn't find out about it until after Mary had passed away, nearly 70 years later. Kevin Burg, Miss Ford's grandson posted it online and mentioned that the letter wasn't discovered until after her death.

Written on Disney Company stationery with a Snow White letterhead, Mary received a rejection letter, and by today's standards, a very difficult one to take. Mary Cleane of Disney's Human Resource Department signed the letter which outright rejects Mary Ford's request to be an animator. Why? Because she was female. Ouch!


Women do not do any of the creative work in connection with preparing the cartoons for the screen...

The only work open to woman consists of tracing characters on clear celluloid sheets with Indian ink and filling in the tracings on the reverse side with paint according to directions. 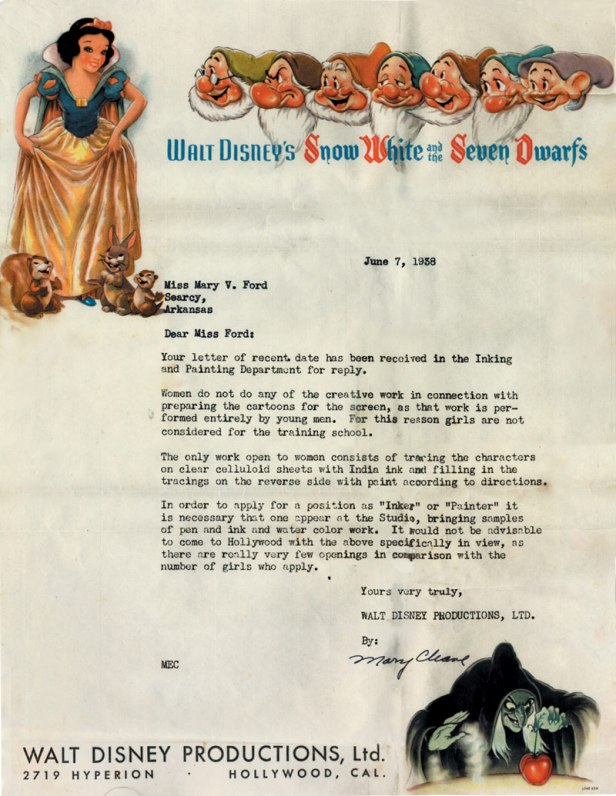 Interestingly, it appears that this rejection was not unique but rather a form letter. The same one was sent out to a Miss Frances Brewer in 1939. And it too was signed by Mary Cleane... 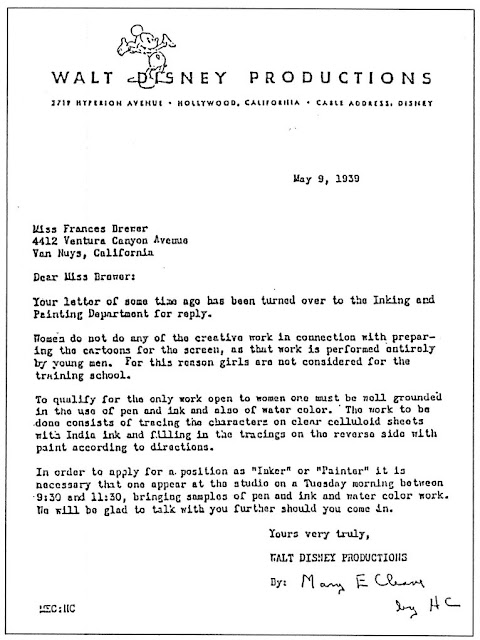 
While the world we live in today is far from perfect, it's hard to imagine such an openly discriminatory rejection letter being issued now by Disney or any major corporation. This is not to say that people are free from being discriminated against. Hardly. Yet, we have made some progress from those early days of animation in 1938.
Posted by Snow White Archive at 12:01 AM

Email ThisBlogThis!Share to TwitterShare to FacebookShare to Pinterest
Labels: ~history behind the film, ~letters/notes/autographs, ~stationery miscellany