Scary Adventures - Precursor to the End

It was sometime in 2010 that I first began hearing rumors about the closing of the Snow White ride, but I didn't believe them. Walt Disney World would never abandon a classic opening-day attraction like this (notwithstanding the Mr. Toad loss of 1998). Yet by January 2011, it was official. Although it would be some time before we'd learn just when it'd occur, the days were numbered for the Scary Adventures. I visited the park in late February 2011 to say my goodbyes, and almost exactly a year later, a closing date of May 31st was finally announced.

I have to admit that I never thought I'd experience the ride again. While the desire was strong to see SWSA one last time, there were also ample reasons why I should not return at this time, not the least of which was financial. But slowly the pieces started to come together for a potential visit.

First I was contacted by my friend Ron Miles in Orlando. Over the last year, I have been working on a film project about his son Ben, an autistic boy who has ridden the Scary Adventures over 3200 times. Ron wanted me to know that he, along with Ben's mother Sara, were making plans to be at the park on the final day with the hope of having Ben be the very last person to ride the attraction. A big justification for me to be there!

Then I also heard from Ken Sundberg of Finland, creator of the KenNetti Snow White database. He wasn't sure yet, but he too was hoping to make the trek to the Magic Kingdom for the final days. I'd never met Ken in person and the chances of our Snow White paths crossing again at some other future date were slim at best. Another important reason for me to make this trip now.

Yet, still I hesitated. The high cost of travel, an uncertain job future, an ill family member...all factors in my decision not to go. I'd made up my mind. SWSA would close without me.

Then with just two weeks before the end, my wife suddenly had an intuition that I should go. Financial worries be damned, she felt I needed to be there. Always in the past when it's mattered most, her intuitive insights have proven correct. This was no time to start doubting now. I began making plans to fly to Walt Disney World!

Pictured below: Arrival at Orlando International Airport on May 29, 2012, two days before the end... 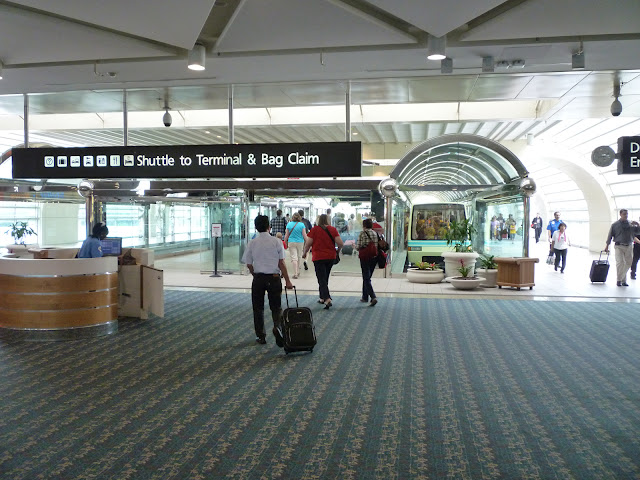 CONTINUED IN NEXT POST.
Posted by Snow White Archive at 12:01 AM