August 3rd, 2010 is the release date for John's latest book, Two Guys Named Joe: Master Animation Storytellers Joe Grant and Joe Ranft. It looks to be a good one. 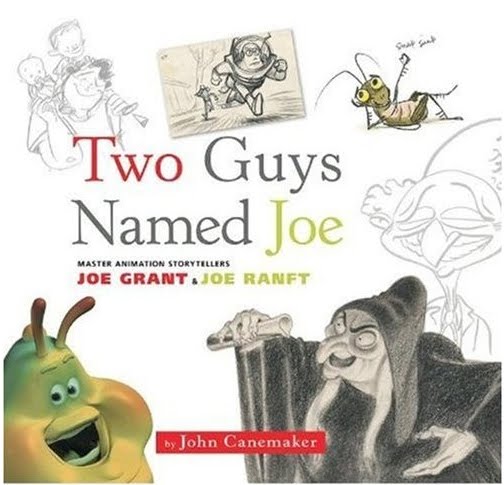 A book overview from the Amazon Product Description:

One Joe was in his ninety-seventh year when he died in 2005; the other Joe died the same year at age forty-five. Both died before their time. This book explores the interplay between personal creativity and the craft of animation storytelling, as seen through the lives and art of two of its greatest practitioners: Joe Grant and Joe Ranft. Grant and Ranft were unique influences on storytelling at two major studios during important periods in the history of animation.

Joe Grant, in fact, straddled two eras. A gifted newspaper caricaturist, he contributed ideas for Mickey Mouse and Silly Symphony shorts as well as classic masterworks like Snow White and the Seven Dwarfs; Pinocchio; Fantasia; and Dumbo. As Walt Disney's confidant, Grant played a leading role in defining Disney's pioneering animation legacy. He returned to the studio at eighty-one after a forty year hiatus, his creative spirit and abilities undiminished, and made significant contributions to Beauty and the Beast; Aladdin; Mulan; and The Lion King, among others.

Joe Ranft built on the traditions of the past forged by Grant and others to become the top animation storyboard artist of his generation, working on Tim Burton's The Nightmare Before Christmas; The Brave Little Toaster; Who Framed Roger Rabbit; James and the Giant Peach; The Little Mermaid; and Beauty and the Beast, among other films. As one of Pixar's creative founders and a close friend of John Lasseter's, Ranft had a major influence on the studio's signature originality, warmth, and irreverent humor, through his contributions to Toy Story; Toy Story 2; A Bug's Life; Monsters, Inc.; and Cars.

Grant and Ranft were inventive and imaginative, with keen insight into characters, and they inspired colleagues and entertained audiences around the world. Although their combined careers spanned the Golden Age of traditional animation that began in the 1930s at The Walt Disney Company and became the present digital age at Pixar Animation Studios, their extraordinary contributions remain largely unknown to the public. 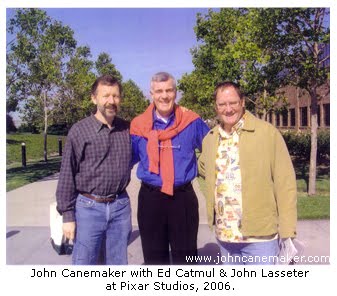 
John Canemaker, has worn several hats throughout his career including filmmaker, writer, teacher, artist, and certainly one for animation historian.

A few of his books include:


Here's an interview with John during the Annecy International Animation Film Festival 2008...


You can catch him in many of the Disney DVD extras including those on the Snow White and the Seven Dwarfs discs. Read more on Joe Grant in this August post.
Posted by Snow White Archive at 6:05 AM