About 3 weeks ago, I was given a tip from Richard over at ghoula.org (ghoula is short for Ghost Hunters of Urban Los Angeles) that there was going to be a Snow White "artifact" on display for one night only at the May installment of their monthly meetings. It was said to be an object from the original 1955 Disneyland Snow White Ride before the renovation of 1983.

May 13th, the night of the gathering, came and went. Being two thousand miles away at the time, I figured that was the end of it, and I'd never really learn anything more about this mystery item.

But then a week later, I received a comment on my blog that simply said, Can I send you a picture of the artifact? My response was of course a big "YES".

Now here, thanks to Richard, is the story (and picture) of the artifact from the original Disneyland Snow White Ride:


As you can see, it is a piece of the exterior mural at the entrance to the old Snow White dark ride. It is the only surviving piece of that mural (if what this collector says is true). 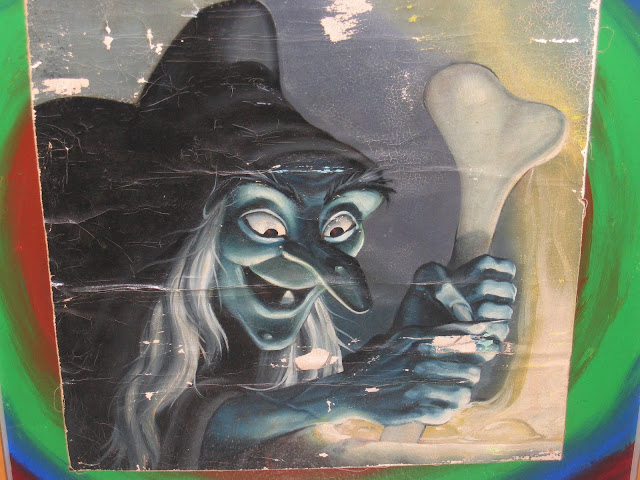 According to the collector, the back story is...

When the new Fantasyland was being built in 1983, the plans called for the demolition of the wall (with the mural) to make room for the larger loading area. One of the workers on that construction site wanted to save the piece of the mural with Snow White and give it to his wife as a gift (like she is the "fairest in the land"). However, he was too late. When he went to get it, that section of the wall with Snow White had already been destroyed. The only portion of the wall left was the section with the Witch over the cauldron. Quickly, he used an exacto knife and cut out this piece, struggling to remove the canvas that had been glued to the wall (hence the creases in the painting). The wall was leveled, and all the bits of the mural were thrown away with the rubble. Unfortunately, when he presented the Witch to his wife, she was not amused and didn't appreciate what the painting possibly said about her. So the worker got rid of it, where it fell into the hands of this collector.

The collector who owns it wishes to remain anonymous, and one night with no promotion about it was unfortunately the deal. Now, it is back in the vault, and those who came to the event have their pictures.


Thanks again to Richard for sharing this bit of interesting Snow White history.
Posted by Snow White Archive at 7:44 AM