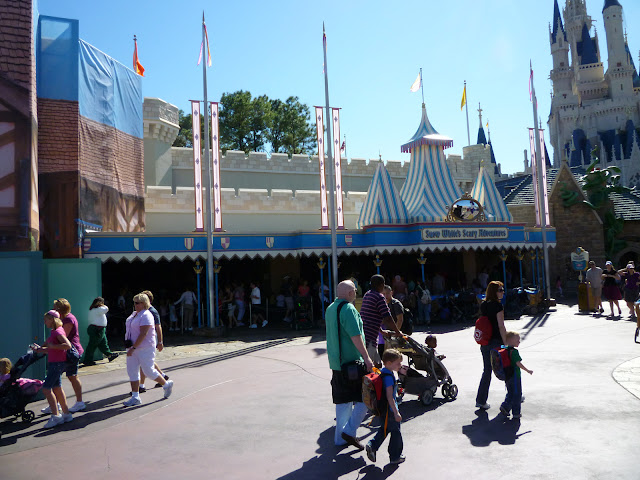 
Today is a propitious day for me personally, so I will reflect a little on just why I am drawn to the Snow White story. As mentioned in an earlier post, for most of my life I'd experienced no affinity with this fairytale. At my first viewing of Disney's Snow White and the Seven Dwarfs, I felt nothing. Yet, everything changed a decade ago with the events (A, B, C) leading up to and then the riding of Snow White's Scary Adventures at Walt Disney World. A door opened inward for me on that day, and I began to see the significance of the story--especially in the way Walt Disney presented it. 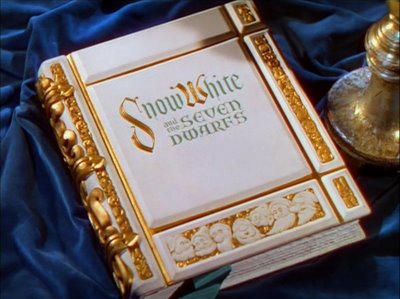 Snow White as told by the Grimm Brothers is a fairytale, one of the most beloved of them all. As we know, fairytales can, and often do contain life truths, lessons for living, such as the difference between "right" and "wrong". Walt Disney, however, was a visionary. His version of Snow White transforms the story from a simple fable into something more reminiscent of deep mythology. The characters transcend into archetypes, symbols for the multifarious components of the human psyche. 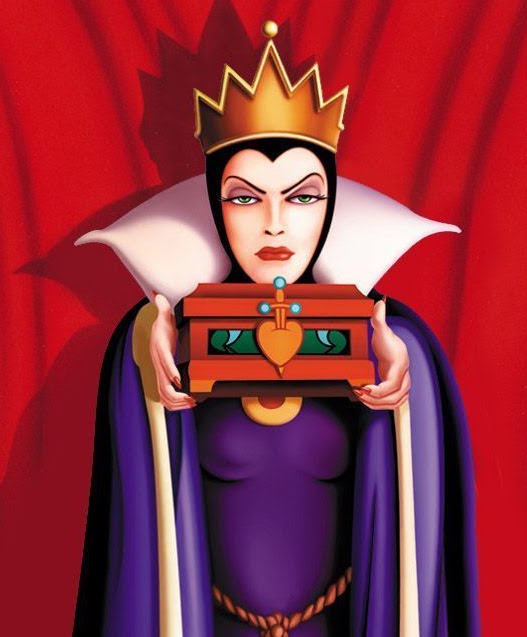 The Queen, and later as the witch, epitomizes the mental body or more precisely, the mind out of whack. While the ego is an ever important player in the day-to-day world we live in, when it's allowed to dominate and control to extremes, it becomes out of balance to the detriment of the whole. The Queen's infatuation with her own looks as well as her desire to kill Snow White is symbolic of a linear mind disconnected from the understanding of the other aspects of itself. 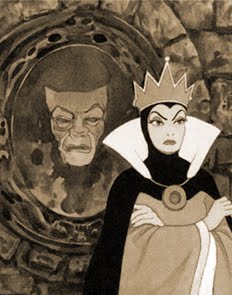 The Magic Mirror. It only speaks the truth.

The employment of a magical looking glass in storytelling is as old as mirrors themselves. The reflection does not lie...usually. So the mirror makes for the perfect representation of that still small voice within each of us. It knows the truth even if we don't care to hear it. As the Queen becomes more and more obsessed with being the most beautiful in all the land (that is, the most dominant force within the human psychological landscape), the Mirror does not hesitate to set her straight. There is another..."more fair than thee".


Over the seven jeweled hills, beyond the seventh fall, in the cottage of the seven... Why Seven Dwarfs? 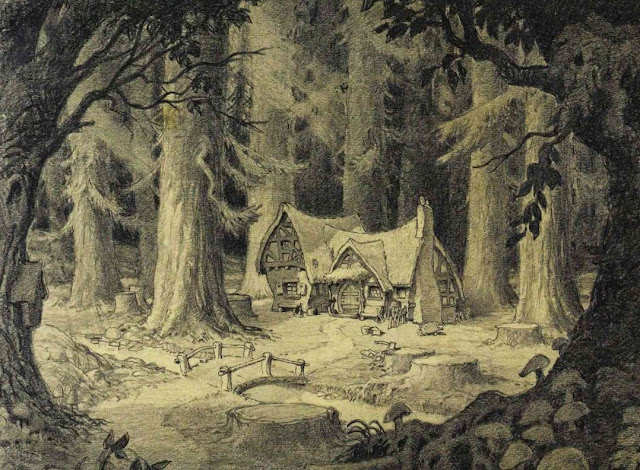 Scratch the surface on the number seven and you'll soon discover just what an auspicious quantity it is thought to be. There are seven days in a week, seven wonders of the ancient world, and even the seventh inning stretch in Major League Baseball. In astronomy, it is the number of Atlas' daughters in the Pleiades--the Seven Sisters. In Japanese mythology, the Seven Lucky Gods refer to the seven deities of good fortune. In Hinduism, the endocrine system is made up of seven spiritual energy centers (or chakras) that, when opened and balanced, lead to enlightenment. In Christianity, there's the seven days of creation and in Islam the seven heavens. And seven is a highly symbolic number in Judaism, alluding to in the Torah, the infusion of spirituality into the physical world.

The Seven Dwarfs "allude" to the other worldliness of the physical, as to say, "Pay attention because there's more going on here than meets the eye." Could it have been six dwarfs or eight? No way. It had to be seven because they are the "infusion" of magic and enchantment into everyday life. It had to be seven because there really is much more going on in this story--translation--inside us than meets the eye.

When one thinks of Walt Disney's inspired interpretation of Snow White in mythological terms, all the characters are brought into perspective and seen as representations of the multifaceted parts of ourselves. Together they make up the whole of our being. Yet, there is something uniquely special about the Prince and Princess. 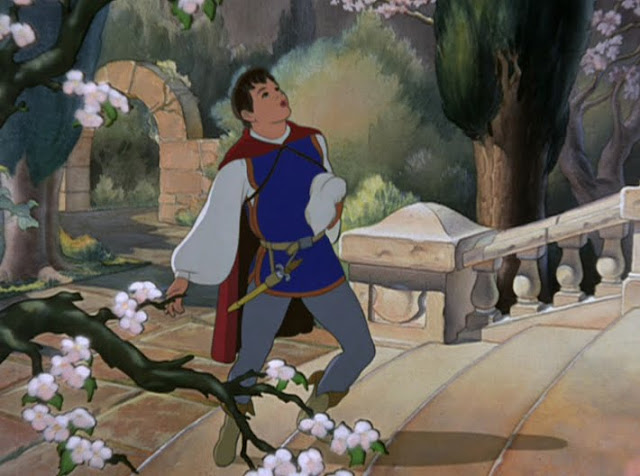 The Prince, embodying the masculine virtues of the self, is movement within the world. He serenades the Princess. He goes in search of her after she has run off. He finds her, kisses her, and leads the newly awakened maiden back to his castle. The Prince in Disney's Snow White doesn't, however, do much more than this. But then again, he doesn't need to. He acts when it is necessary. The Prince is action within the physical world.

So what role does Snow White fulfill? 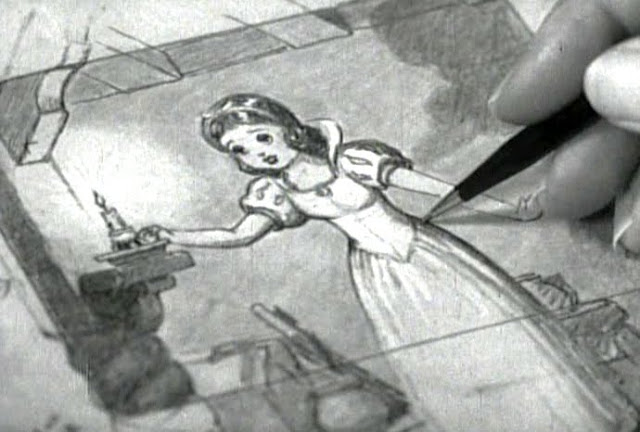 It's been over seventy years since the release of Snow White and the Seven Dwarfs, and its count of admirers is greater than ever. Yet, there are some who view the Snow White character as antiquated, a weak, helpless female, a girl who required the aid of a male in order to be rescued. They have declared her irrelevant to the ways of today's world. Others see the character as naive and the story as nothing more than "Disneyfied" entertainment for children.

In response, I must first reiterate that to me the story is mythological, and as such, the characters are not to be taken simply at face value. Just as the Queen, Dwarfs, and Prince are all symbolic of deeper elements within the human subconscious, so too is the Snow White character. I see the Princess as a wonderful manifestation of such feminine virtues as gentleness, kindness, and beauty. Her grace and poise are attributes to be admired.

And still, there is something in Snow White even more compelling, something that I'm certain Walt Disney worked very hard to create and maintain throughout the 83 minute film. When critics label the Princess as naive, they miss the mark. Naivety carries with it a negative connotation, but Snow White is not naive. She is innocent. We live in a cynical world today, so it's understandably difficult for some to get this, but above all else, Snow White is the perfect embodiment of childlike innocence. 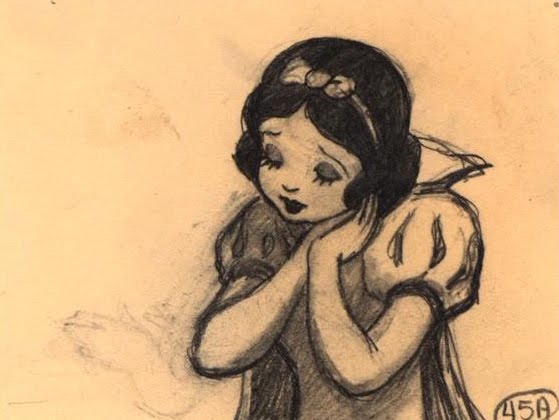 It may lie dormant, hidden deep in the forest of the subconscious. We may think it dead and gone forever. Yet, no matter how far we might stray in adulthood, she is there to remind us that this essence still breathes inside us all.


I do not make films primarily for children. I make them for the child in all of us, whether we be six or sixty. Call the child innocence. The worst of us is not without innocence, although buried deeply it might be. In my work I try to reach and speak to that innocence, showing it the fun and joy of living; showing it that laughter is healthy; showing it that the human species, although happily ridiculous at times, is still reaching for the stars. --Walt Disney

What could be more powerful than to take action in the world and all the while see it through the eyes of childlike innocence? The Prince and the Princess. The masculine and feminine. These two opposites reside in each of us and when in harmony, operate together as a whole and complete entity.


Picture, if you will, a fully functioning human being living a life to its highest potential. The Snow White archetypal equivalent of this can be witnessed in the film's finale. The Seven Dwarfs have brought an end to the antics of the Evil Witch. The Prince carries the Princess to his horse, and from there, they head off toward the horizon to live happily ever after. It is Action and Innocence, after being lost and asleep, finally united in harmony.

Of course this story doesn't speak to everyone. People are unique, and thus drawn to narratives which appeal to their own individual tastes--Cinderella, The Little Mermaid, The Wizard of Oz, Superman. Whatever it may be, we all have one-of-a-kind histories, and what makes one heart sing may fail to be heard by another. But for me, Snow White and the Seven Dwarfs is my story. It's my archetypal blueprint, a road map pointing toward the destination to which, one day, I will arrive.
Posted by Snow White Archive at 5:52 AM

Email ThisBlogThis!Share to TwitterShare to FacebookShare to Pinterest
Labels: ~fans (anecdotes/interviews), ~history behind the film, goddess/mythology