Scary Adventures - The End is Near

May 31: I spent the morning taking in a few attractions--Pirates, Big Thunder, Haunted Mansion, Tiki Room, Space Mountain, TTA. By the time I finally made it back over to the Scary Adventures, it was clear that the Snow White fans were coming out in force to bid their farewells. The line was as long as ever. 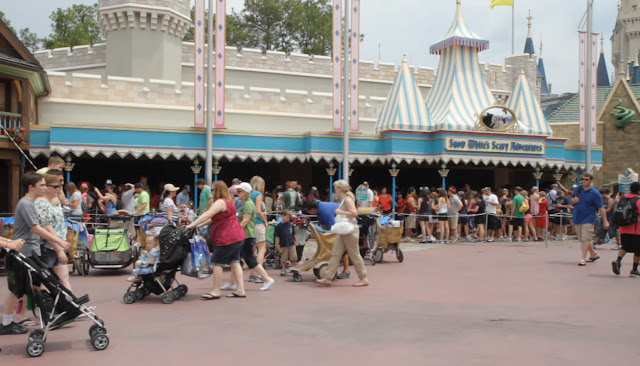 For me, I'd said my solemn goodbyes to the ride yesterday and had no plans to actually board a mine car again (or so I thought). Tonight, I would simply focus on documenting the evening with my camera. Ken and I met around 4:00 pm, both of us with the same intention of parking ourselves at SWSA until the bitter end. Before the night was over, we'd meet quite a few other Snow White fans who had the same idea.

Ken wore a red clip-on bow in honor of the occasion as he counted mine cars. He calculated that a total of ten ride vehicles were operating on the track that evening, eight in motion and two in the loading/unloading area at any one time. Note the cast member directing traffic within the wheelchair/disability access area. The line here is usually quite short, but on this evening it was overflowing out into open pavement beyond the queue... 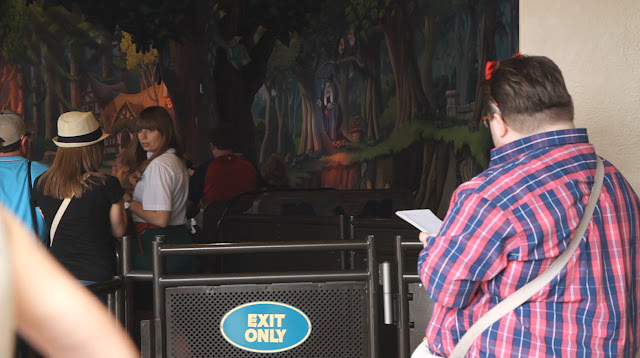 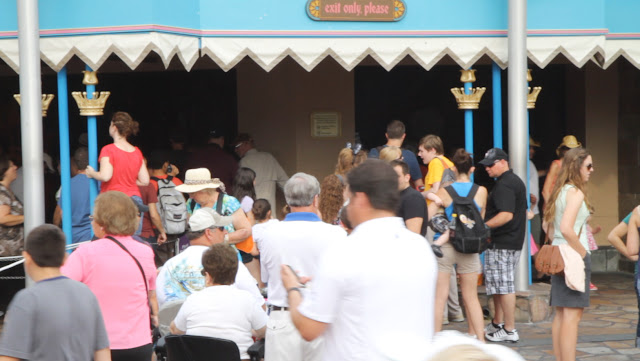 
A diehard fan displays his "Save Snow White's Adventures" shirt... 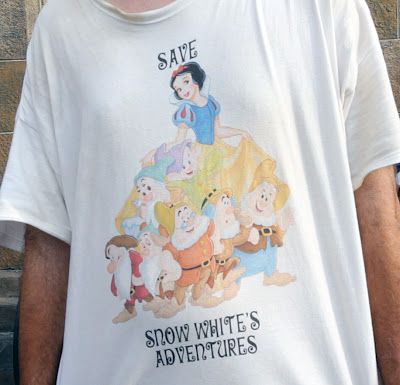 Throughout the day, even cast members were spotted taking their own last spin on the ride... 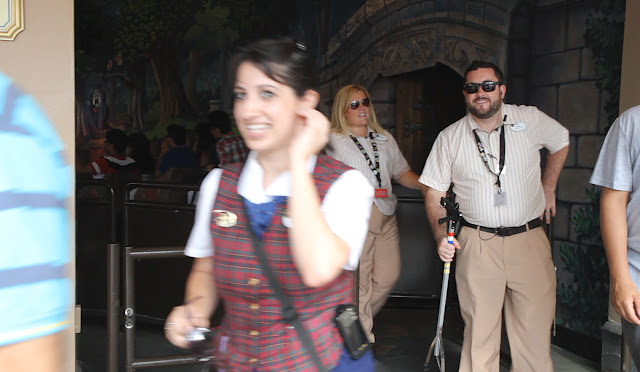 One guest went all out and came dressed as the Evil Queen, along with a very young Snow White. She would tell me that Disney wasn't thrilled about her being in costume within the park and asked her not to pose for photos with other guests...

By 5:00 pm, Ron had arrived with his son Ben. Ben's mother, Sara, would join them a short time later. If you're familiar with Ben's story, then you know that he holds the record for most times aboard Snow White's Scary Adventures. Over the last nine years, he's racked up more than 3000 rides. To be specific, Ben would start the night with 3451 rides under his belt. 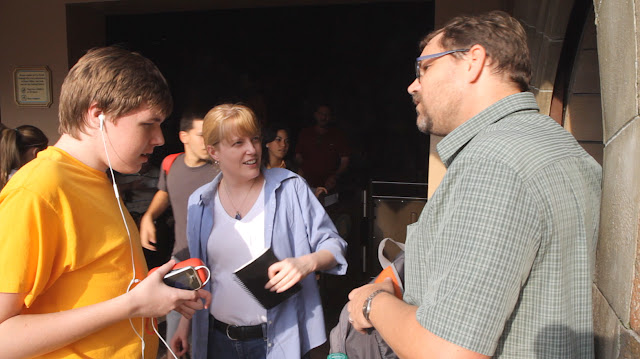 If Ben had his way, he'd probably spend all of his time in the Magic Kingdom on the Snow White attraction. He enjoys it that much. However, to create a little balance in his park experience, his parents long ago implemented a rule that he could ride it three times in a row, but then they'd have to go do something else before coming back for another round of three. Yet tonight was different. This was the end. No such rules applied anymore. To the great surprise and joy of Ben, he was allowed to get right back in line after his third ride of the night. 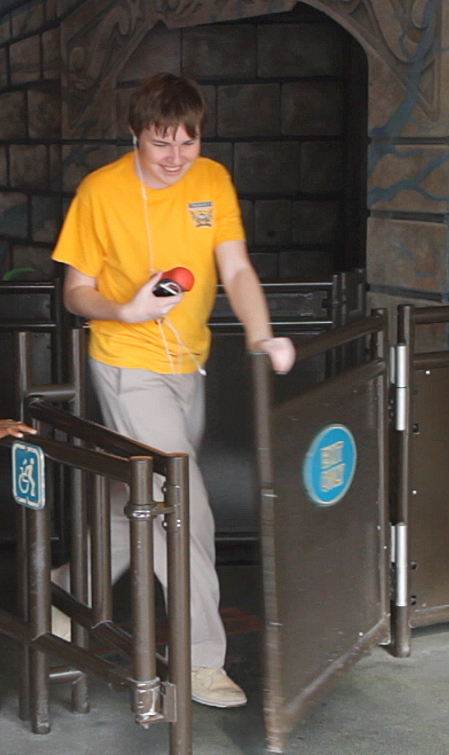 The three-ride limit has been lifted; Ben is all smiles.


You can't visit an attraction as many times as Ben has without a few cast members getting to know you. Earlier in the week, Disney had been in contact with Ron. Several of the cast members wanted to come see Ben on this final night, and the word was that they were planning something special for him, but just what the specifics were, Ron did not know.

The lines for the Snow White attraction continued to grow as the evening pressed on. Ron and Sara were alternating rides with Ben when at about 7:00 pm, cast member Stacey Patrone came over to speak to them. They were led away from SWSA to a quiet spot in front of The Friar's Nook where they waited with a few other cast members.

For Ben, the only thing that could top an evening of continuous rides on the Scary Adventures would be a visit from Snow White herself. That's exactly what Disney did. The Princess made her entrance by happily skipping right up to greet him. After talking and posing for photos, they held hands and walked over to the queue. Ben, Snow, Ron, Sara and a Disney photographer all boarded the mine car and experienced the dark ride together. Afterward, she escorted him back to The Friar's Nook where she blew him a kiss and said goodbye. Ben was smiling and laughing throughout. 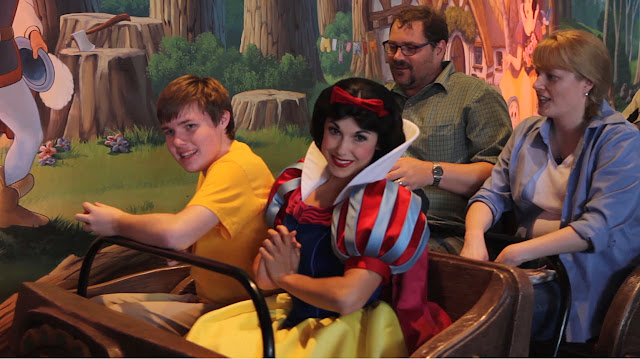 Video of Ben and Snow White...

After all the commotion, Ken managed to nab Snow White's autograph on a CD he'd brought with him from Finland... 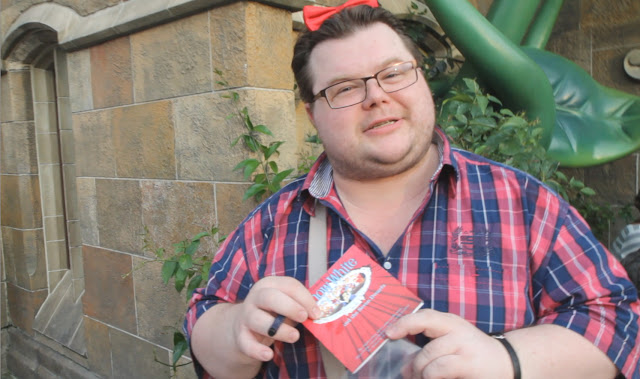 As we entered the waning hours of Snow White's Scary Adventures, the queue line only continued to grow.

FINAL DAY CONCLUDED IN NEXT POST.
Posted by Snow White Archive at 12:01 AM