One of Adriana's Last Autographs


I always draw two identical pictures, so the person can keep one. I generally always draw older people because I've always found them more interesting subjects (and they're more likely to respond). I would say my favorite ones are the people who aren't necessarily "celebrities" but circumstances caused them to be in the right place in the right time to have a place in History. From his blog Darren's Celebrity Drawings.

On this particular occasion, Darren drew a scene from Snow White and the Seven Dwarfs which he completed on October 23, 1996. He mailed the two drawings off to Adriana Caselotti in hopes of having her sign one. 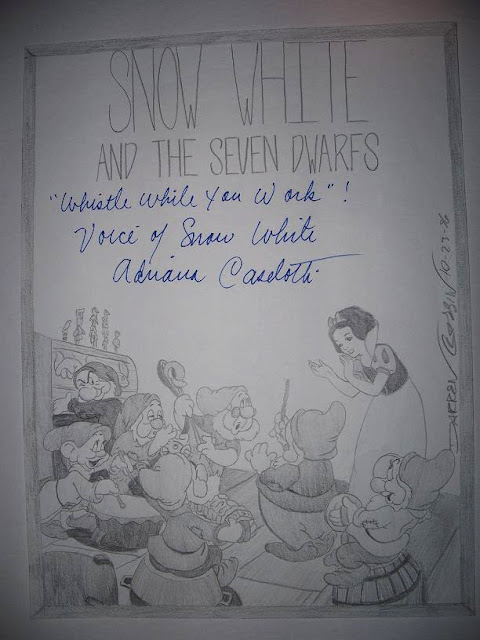 But unfortunately for Darren, Adriana returned the drawings to him unsigned and included a price list with her signing fee...

I figured what the heck, she's 80, I may as well. So I sent her $60, her fee for signing both drawings. She signed both of them, and also sent me a nice note on Snow White stationary, and a signed photo for free! Sadly she passed away just two months later at age 80...I was glad I ended up paying her to sign them.From Darren's blog post.

Adriana developed lung cancer in 1996 and died of respiratory failure on January 19, 1997. Darren's drawing would have been one of the last autographs she ever signed. 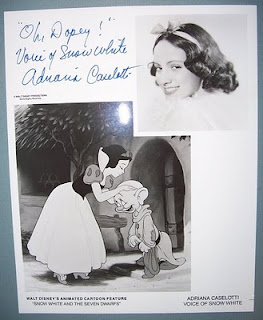 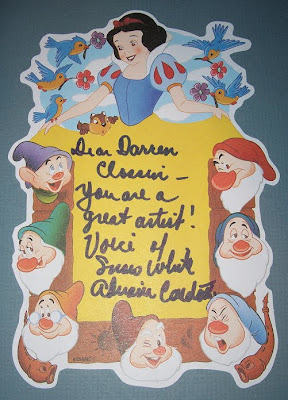 Darren's 8x10 and Snow White Stationary autographed by Adriana Caselotti. All images used with permission.
Posted by Snow White Archive at 5:30 AM