With the recent premiere of Disney’s Oz The Great And Powerful, this seems like the perfect time to have a look back at the 1939 The Wizard of Oz MGM Campaign Book. Extremely rare, most of these pressbooks were cut up for use or discarded at the conclusion of the film's original run.

After only a few pages in, it becomes clear just how much of an impact the success of the previous year's Snow White and the Seven Dwarfs had on the way Oz was marketed. Collector Rick Payne came across this uncut book and shares here many of its pages, including all of the ones with Snow White references...of which there are plenty. 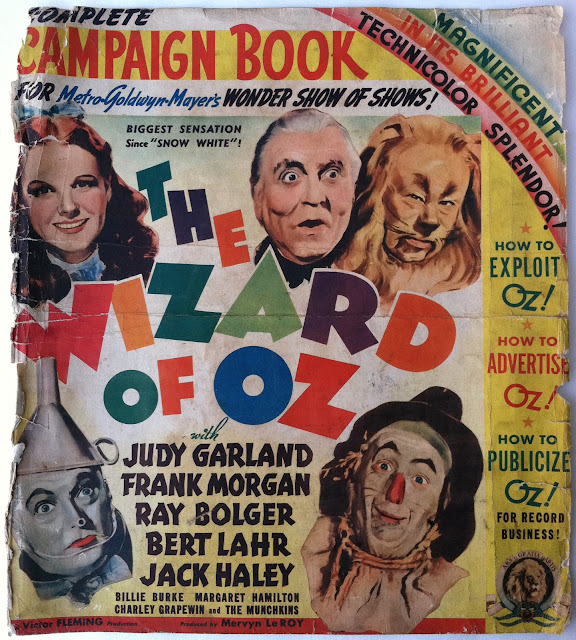 The original pressbook from the The Wizard of Oz is an incredible reminder of the power and influence of the great movie studios. They didn't just make the film - they had to create a whirlwind of excitement in newspapers, magazines, in lobbies, on radio and on the street to guarantee that the movie-going public was properly primed.

The Oz Campaign Book consisted of four parts: (1) an oversized full-color folder to house all sections; (2) an Exploitation Section containing the overview of the entire national publicity campaign; (3) an Exhibitor Service Section containing newspaper copy for feature and serialized stories about the film; and (4) a Pressbook Advertising Section containing print-ready newspaper ad layouts. 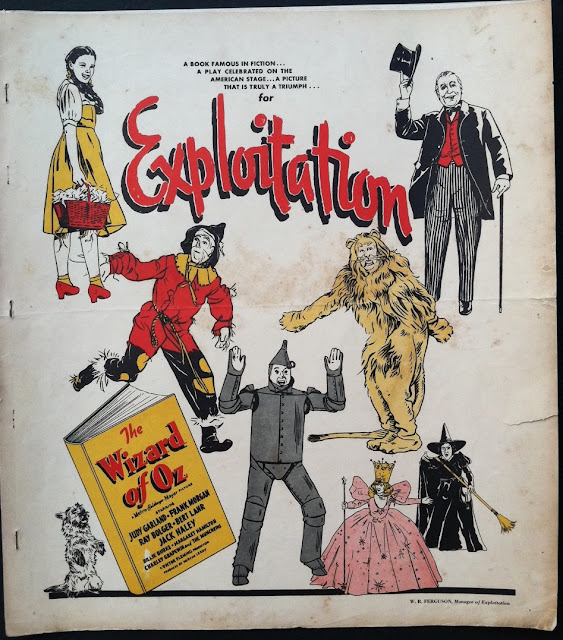 Campaign books provided strategic and tactical guidance to theater managers, helping them plan in advance for the kind of "ballyhoo" activities that would bring attention and attendance to their screens. These books showed the complete selection of posters and lobby display items they could order from the poster exchanges that supplied and coordinated on-time delivery to each theater. The books detail upcoming promotional placements scheduled for magazines, record stores, book stores, and radio. They also contained print-ready ads and feature stories to be supplied to local newspapers by the theater. Most intriguing are the gimmicks - the use of buttons, contests, flashmobs, costumed street performers, and other opportunities for the local P.T. Barnums to build word-of-mouth anticipation. Generally speaking, the bigger the movie, the more elaborate the pressbook...and The Wizard of Oz was about as big as they got! 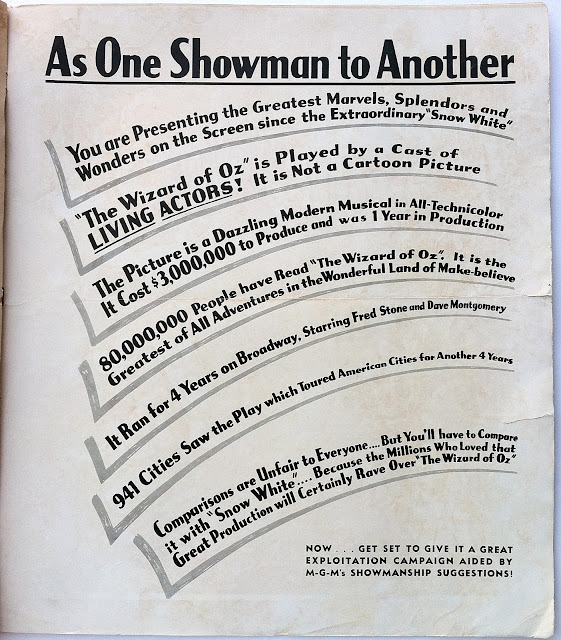 When you review the emphasis on the music, there's little doubt that Disney's successful use of songs was top-of-mind when you see the pages dedicated to sheet music and record sales. 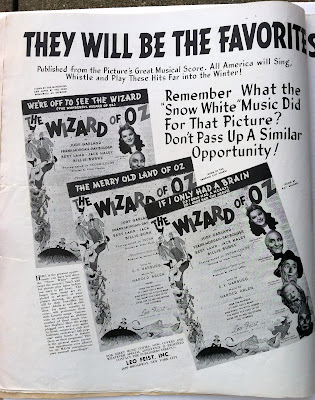 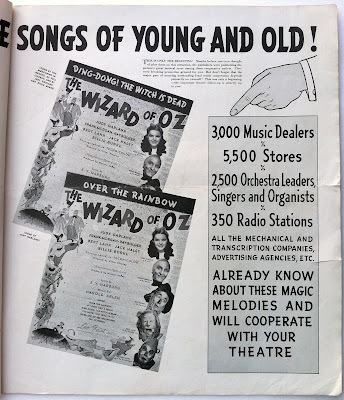 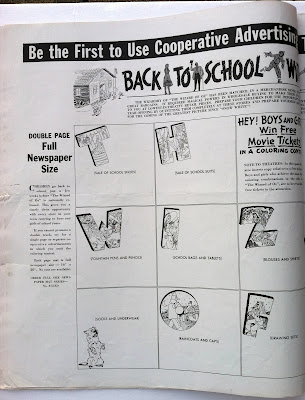 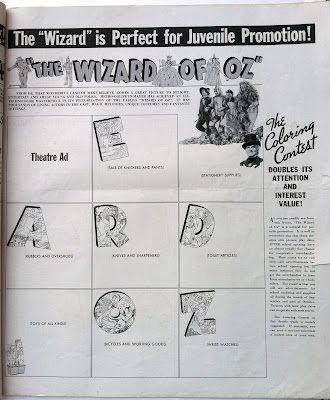 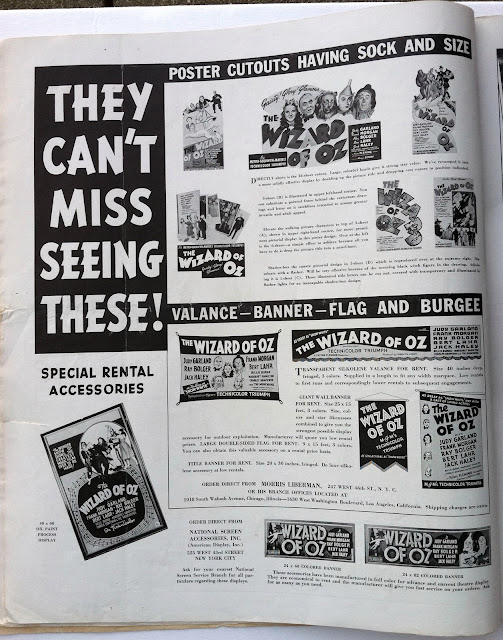 Close-ups of above page... 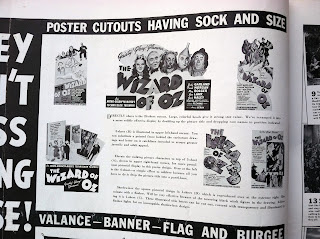 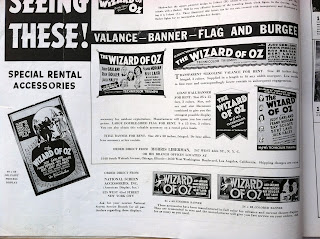 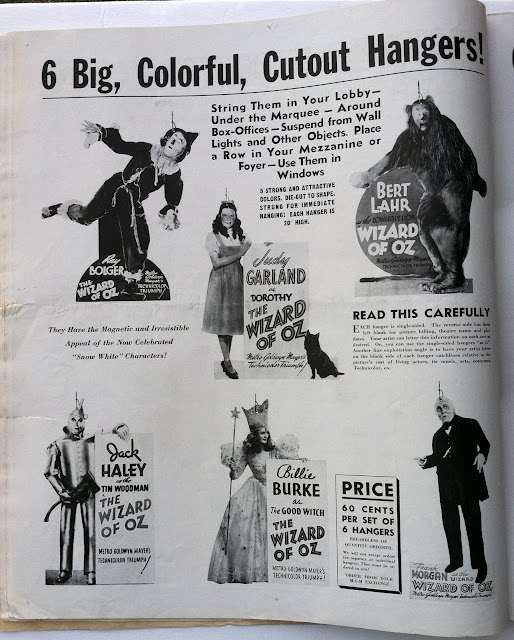 "The Greatest Triumph Since Snow White." 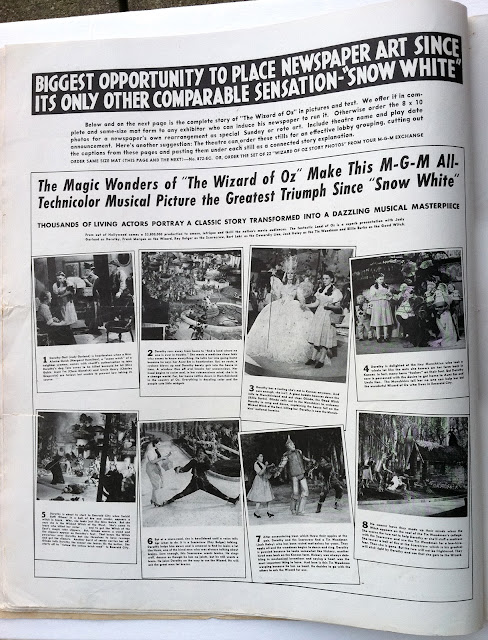 Approximately half of the pages in the Campaign Book specifically draw a comparison to the success of Snow White...MGM recognized the amazing success of the Disney film and made it an integral part of the promotional planning. Somewhat surprisingly, this comparison wasn't restricted to internal strategy - the newspaper ad mats and a few of the display pieces actually refer to Snow White by name.

You also get the feeling that the MGM people were a little worried that the public might assume The Wizard of Oz was a cartoon not necessarily targeted to adults, so the feature stories NEVER mention Snow White. The studio may have been conflicted, but they certainly did understand the potential appeal of their new film. 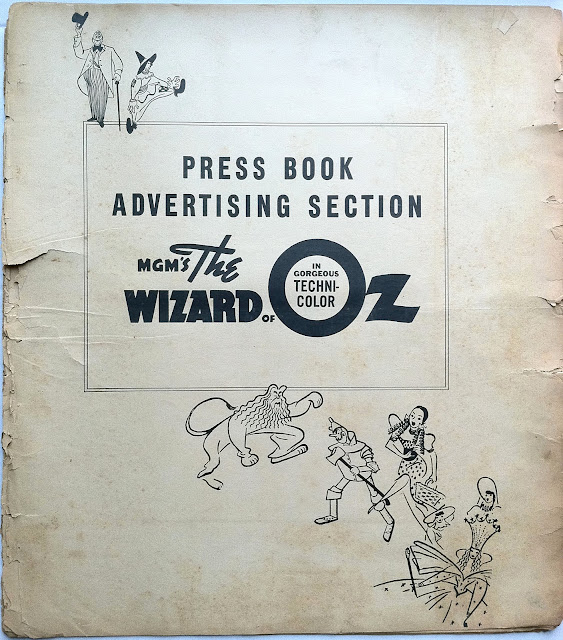 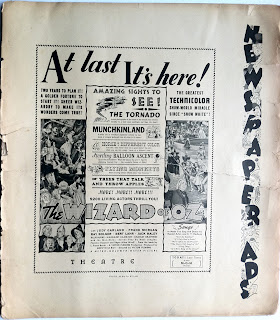 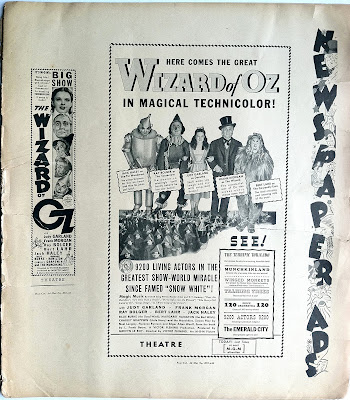 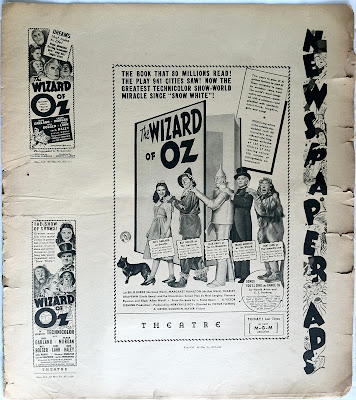 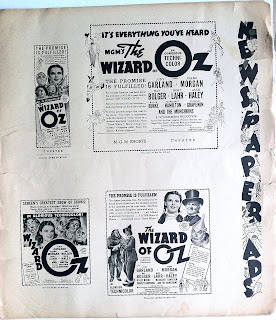 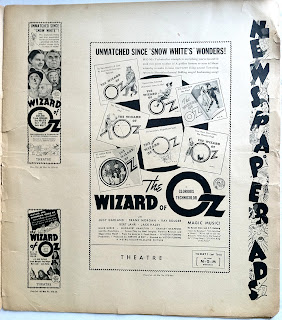 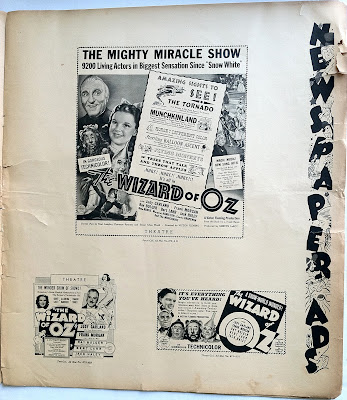 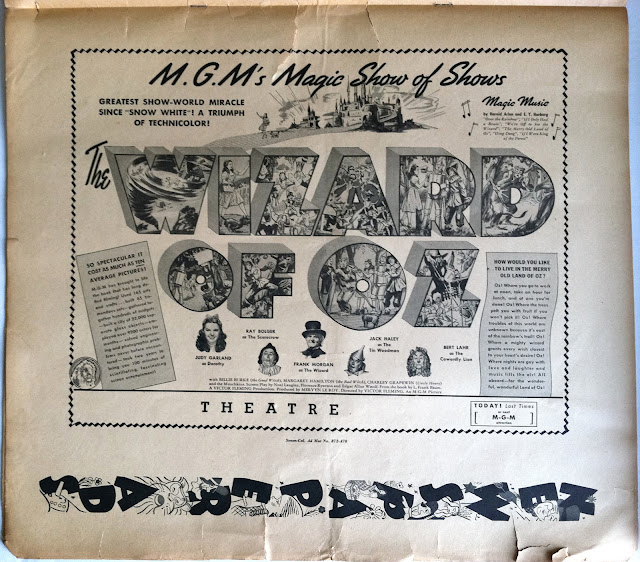 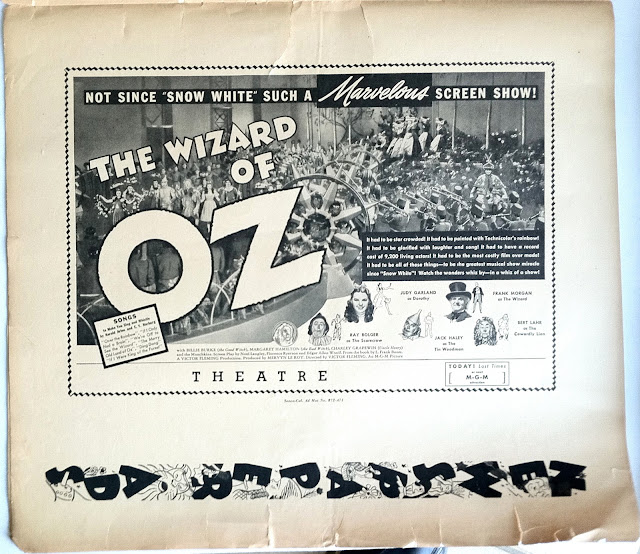 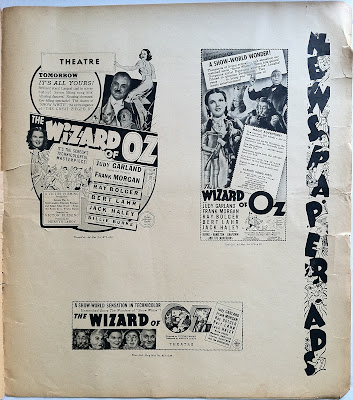 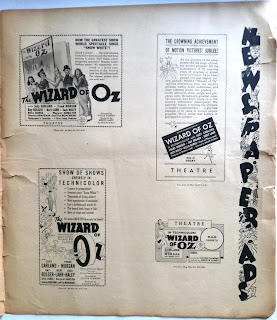 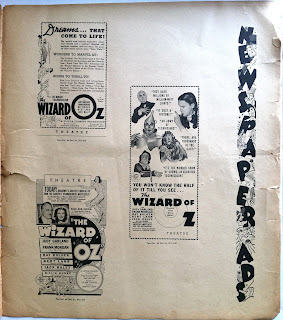 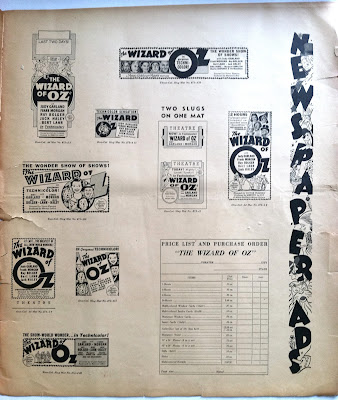 Posters on back cover... 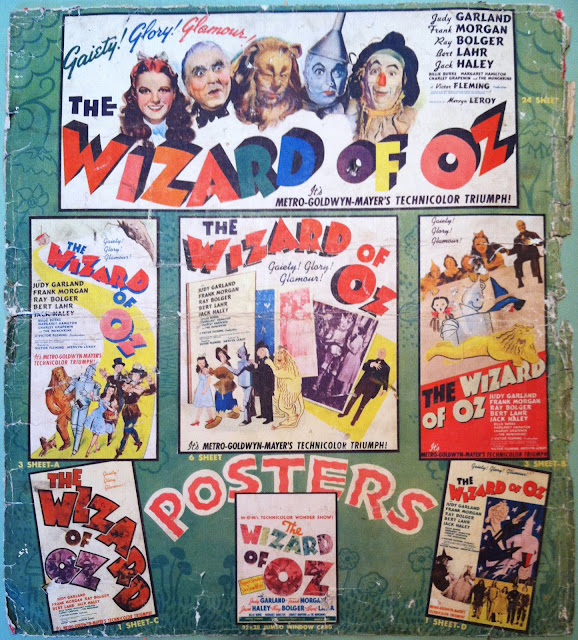 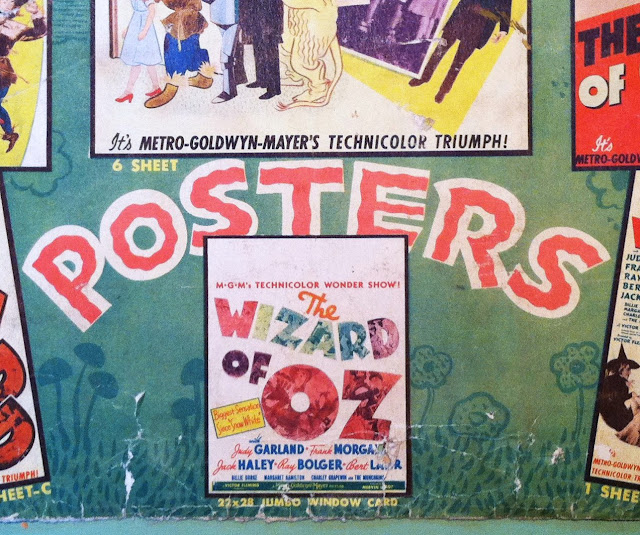 The Wizard of Oz won critical acclaim and was a modest box-office success (certainly an achievement given the production costs), but like Snow White, it was a merchandising bonanza. It also followed the Disney model of successful re-releases in the decades that followed.

Special thanks to guest contributor Rick Payne. See what vintage items Rick has for sale at dadric's attic.
Posted by Snow White Archive at 12:01 AM