Frank Thomas (September 5, 1912 - September 8, 2004) attended Stanford University where he began his lifelong friendship with future "old man" Ollie Johnston. He also met two other students there who he'd end up working with at the Disney studio--animator James Algar and layout artist Thor Putnam. 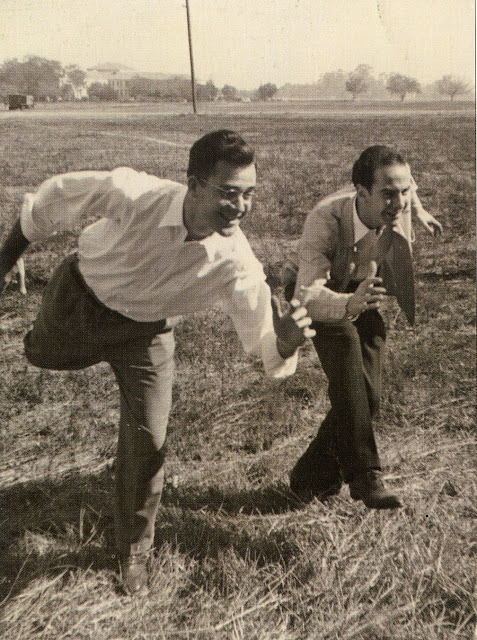 After graduation, Thomas went onto study at the Chouinard Art Institute in Los Angeles along with Putnam and then Johnston. Algar was the first to be hired at Disney, but the others followed not long after, Frank on September 24, 1934.

As was the norm, he started out as an in-betweener where he worked for six months. During this time, he was among a select group of beginners asked to attend the after-hours classes now being taught at the studio by Don Graham (who was promoted to full-time instructor the same day Thomas was hired). Walt was gearing up for Snow White and he wanted his animators ready for the task.

Frank became an assistant to Fred Moore, and his drawing skills excelled as he moved from simple clean-up to full animation work. He also picked up valuable tips and advice from the likes of Ham Luske, Les Clark and Wilfred Jackson. After about a year, Frank advanced to junior animator, and his pal Ollie took his place as assistant to Moore in March of 1936. 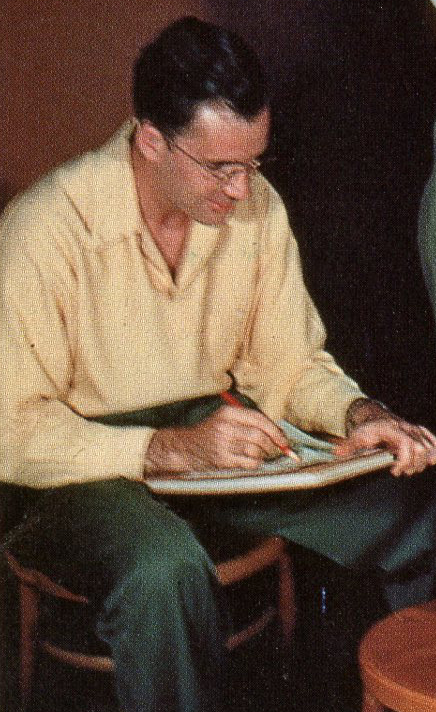 He'd been working at the studio for a year and a half, but Thomas still hadn't met Walt Disney. That changed with Frank's work on the Silly Symphony Little Hiawatha. The "boss" liked what he saw and soon after, the young animator was one of eight artists chosen to draw the seven dwarfs under the supervision of Fred Moore (and Vladimir Tytla).

In the scene where Snow White tells the dwarfs to wash up before dinner, Thomas noticed that the story sketches for the scene suggested that Dopey walked with a "hitch step" in order to keep pace with the others. So he added it. Frank said, "You were always looking for some way of making the character come to life, enriching him, making him a little different." Walt saw the addition in the pencil test and loved it, "Hey we oughta use that hitch step throughout the picture." All scenes of Dopey walking had to be redone. More than one angry animator would privately let Thomas know what they thought of his "brilliant" idea. 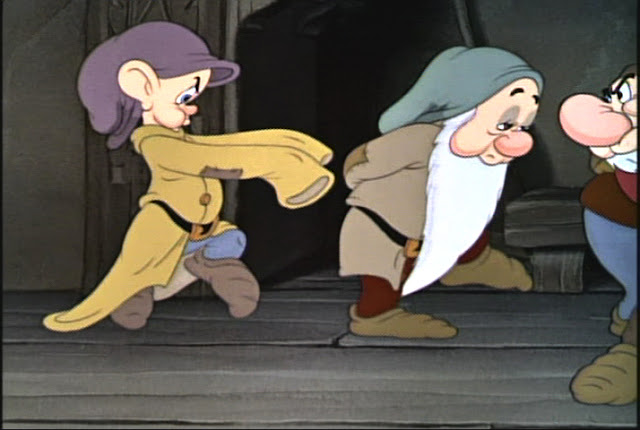 Two of the most powerful scenes in the movie have Frank's magic touch upon them. He animated the cottage sequence with the dwarfs grieving over the still body of Snow White... 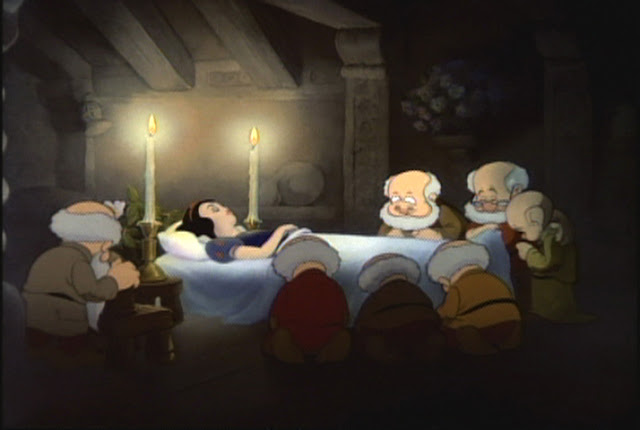 ...and also in the forest as they kneel on the ground around her bier. This last one in particular was a crucial moment in the film. No one in the studio knew for sure if the audience would feel for these "cartoon" characters. The animation had to "realistic, sincere, believable action." 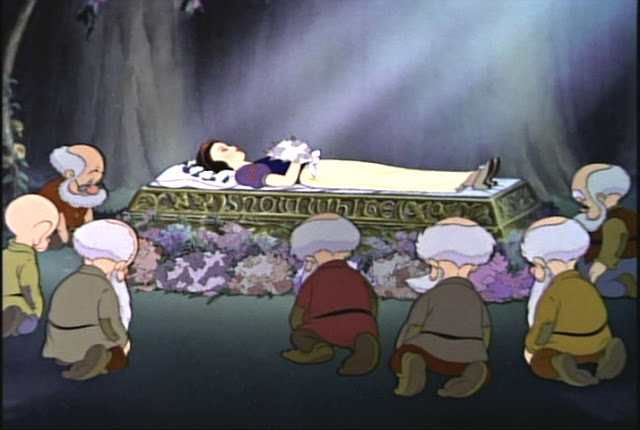 In a 1973 interview with John Canemaker, Frank talked about the process of getting the right look for these scenes...


I made a lot of drawings. Are [the Dwarfs] better looking straight ahead? Are they better grouped together two or three looking around? And, of course, you always have help. Someone in story sketch, someone like Albert Hurter, or Don Da Gradi will make drawings. Don was great at getting the essence of the character. If it was sad, he'd make twelve drawings of a sad guy. You'll only use one in your scene, but you're ninety percent there. Frank Thomas, Nine Old Men p.178 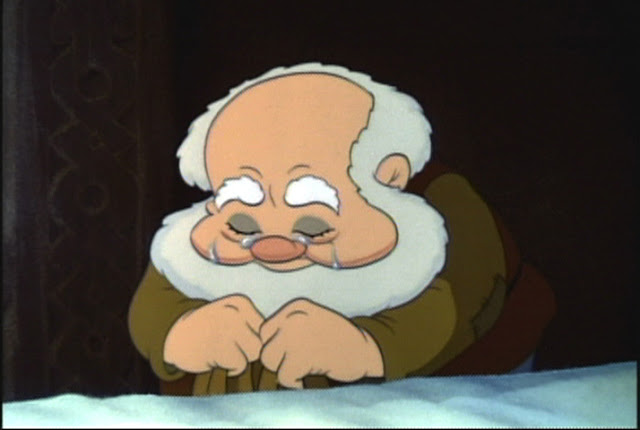 When it came to the animation itself, Thomas wanted to keep the movement of the Dwarfs in check...


...not too much because this is sad and you want minimum movement; but in 'sincere' animation you find out if you do not move the character he goes flat and it kills it, and you can't make your point. In doing a sincere thing, in order to believe this guy is real, he's up there feeling this part, you have to keep him moving.
Frank Thomas, Nine Old Men p.178 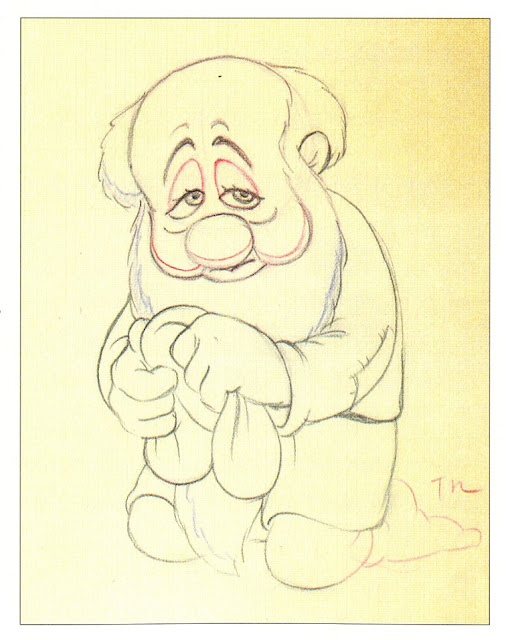 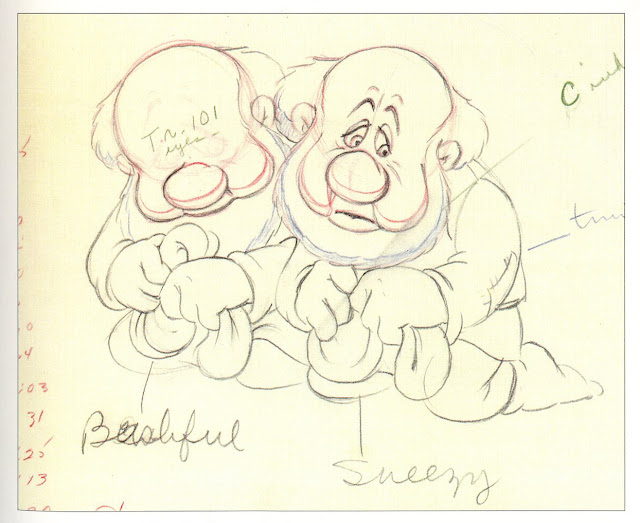 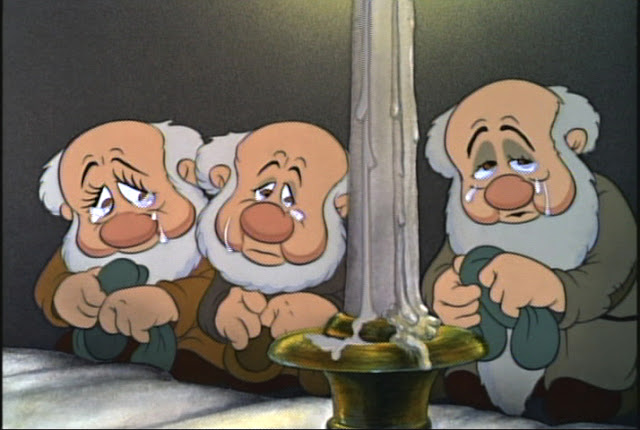 Not all of Frank's animation made it into the final film...


A scene of Dopey collapsing in tears into Doc's shoulder was cut in half when a preview audience laughed; Dopey's face held an uncharacteristically pained expression which the audience misinterpreted. The final version begins as his face is nearly buried in Doc's shoulder and continues through his shoulder-heaving sobs.
John Canemaker, Nine Old Men, p.179 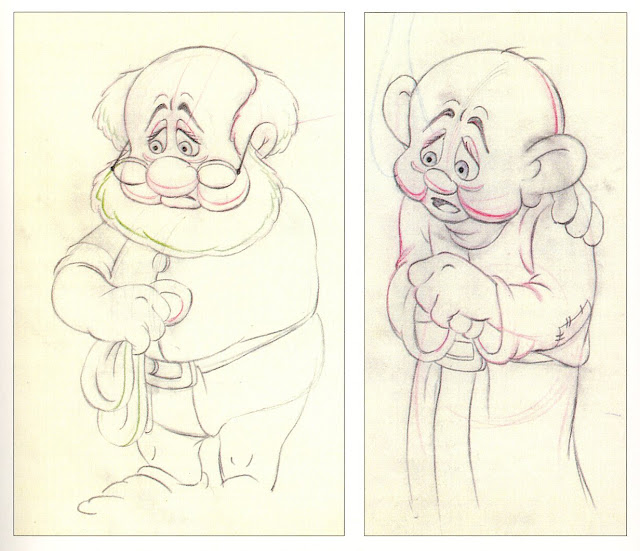 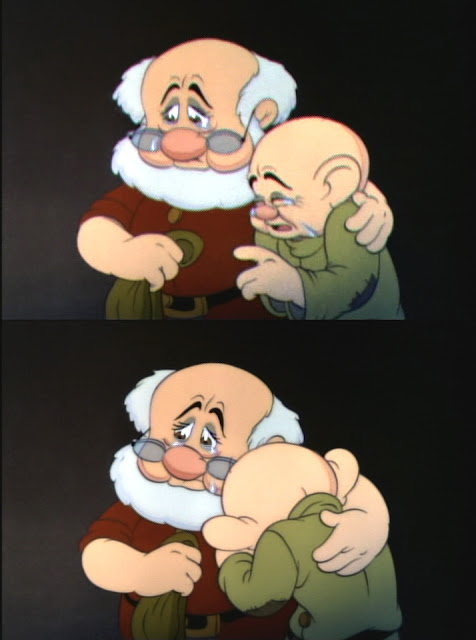 Possibly the most touching moment in the film is when we see Grumpy break down and bury his head in his hand. "The only Dwarf with a major body move," said Thomas. 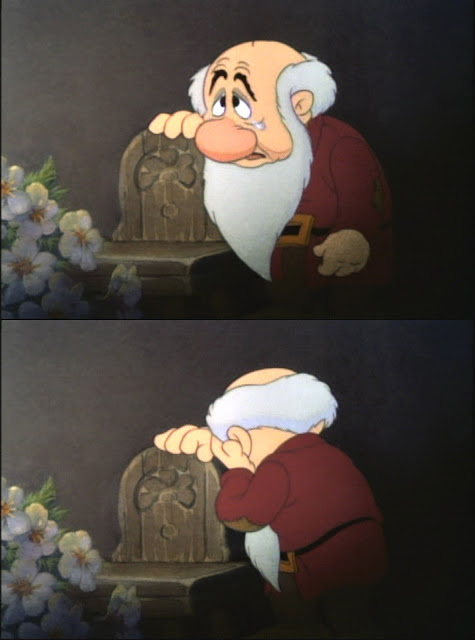 Frank Thomas went on to animate dozens of Disney films and became one of the great animators of the Golden Age. He retired from the studio on January 31, 1978. 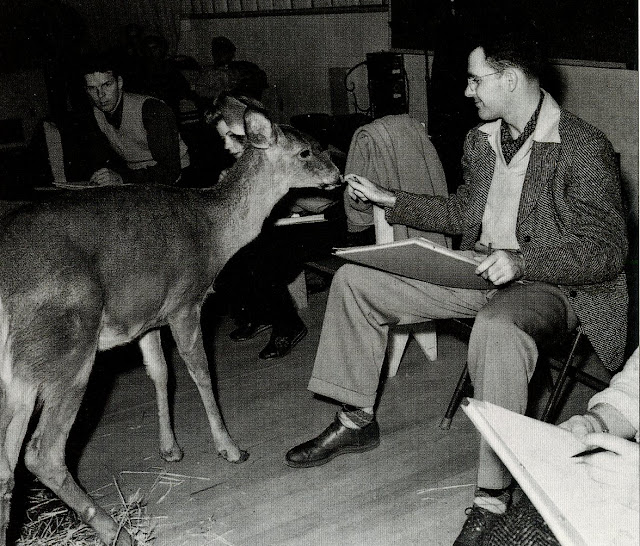