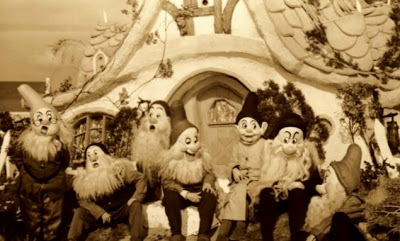 Part of the buildup to the 1937 world premiere of Snow White included the creation of a rather unique setting along Wilshire Boulevard. Dubbed "Dwarfland", this outdoor diorama was erected a couple blocks from the Carthay Circle Theatre. Among other things, it featured a cottage with a picket fence, a working water wheel, and a diamond mine. In addition, passerbys might also catch a glimpse of seven little people, the first costumed appearance of Disney's Seven Dwarfs. 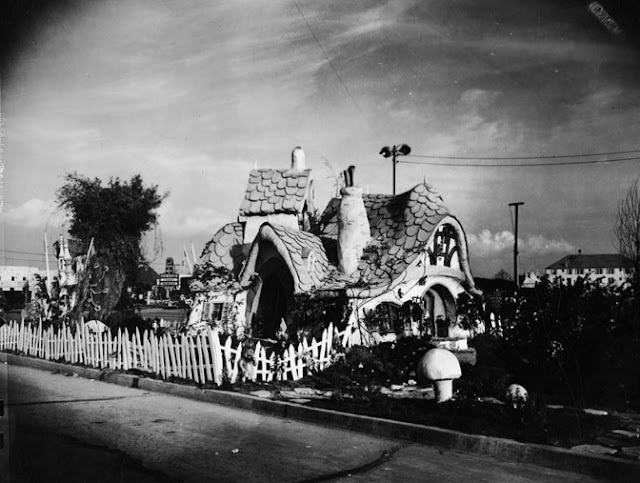 
On the night of the big premiere, NBC radio announcer Don Wilson described the scene in a live broadcast...

Believe it or not, ladies and gentlemen, Dwarfland was moved to Hollywood. Down at the corner of Wilshire Boulevard just outside the Carthay Circle Theatre, Walt Disney built a replica of the dwarf cottage that appears in this picture, SWATSD. The cottage is only ten feet high and not quite so wide so I had a little difficulty trying to get inside but every kid in this here now town has been through it, believe me. Outside are giant mushrooms three feet tall painted yellow and blue and pink, and then there are weird-looking trees with eyes that light up and long arms that reach out and grab at you just the way they grab at Snow White in the picture.

Then there's a little Dwarfs mill wheel there and a diamond mine sparkling in the spotlights that illuminate the entire scene. Then there's the Dwarfs garden that stretches for about two blocks I believe. It's filled with all sorts of strange looking statuary not to mention stumps and toadstools and flowers by the hundred and hundreds. A stream flows through the garden that turns the mill wheel of course. The crowds stand around watching the antics of the seven little dwarfs. Actual dwarfs too in quaint medieval fairytale costumes who are working the diamond mine, raking the garden, and running in and out of the house. Putting on a great show and singing and dancing for the children and grown ups alike.


RKO produced a newsreel with coverage of the premiere. It included three views of Dwarfland. The first shot is looking down the street (McCarthy Vista) towards the theatre. 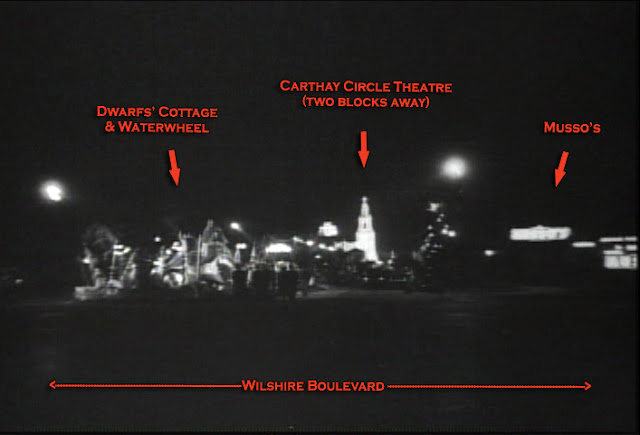 Close-up of cottage with water wheel. 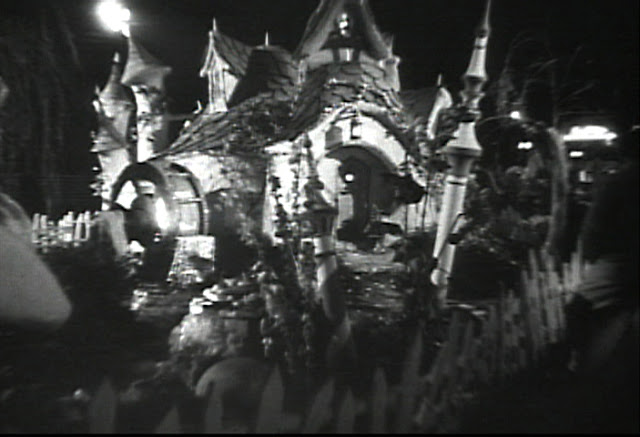 Looking back at the other side of cottage. 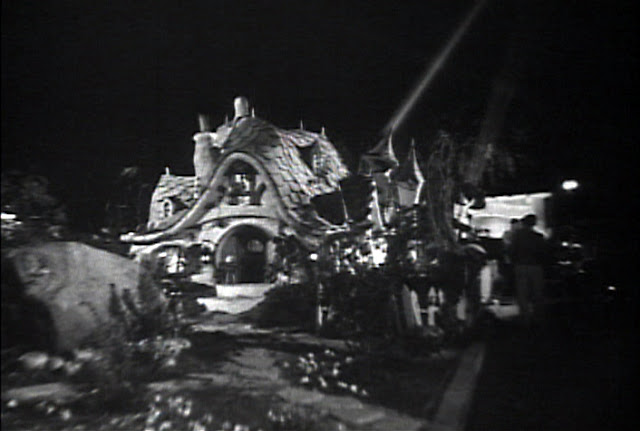 In this still, the Dwarfs perform for the newsreel camera team. Cars behind them on Wilshire Blvd. can be seen to the right. 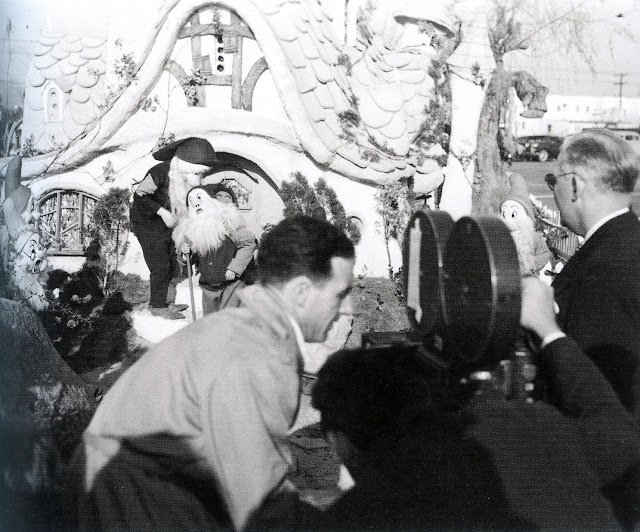 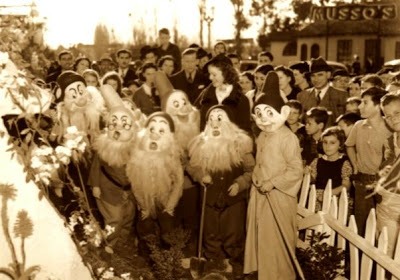 In another publicity shot, we're facing the opposite direction. An unidentified actress stands next to the picket fence with the Dwarfs and a crowd gathered around. In the upper left, you can pick out in the distance the Carthay Circle tower and cupola. Across the street to the right is Musso's Italian Restaurant (run by Joseph Musso, original co-owner of the popular Hollywood hangout "Musso & Frank Grill").

Musso's restaurant was located at 6300 Wilshire. Below, the wide boulevard sidewalk can be seen running along the front of the restaurant. 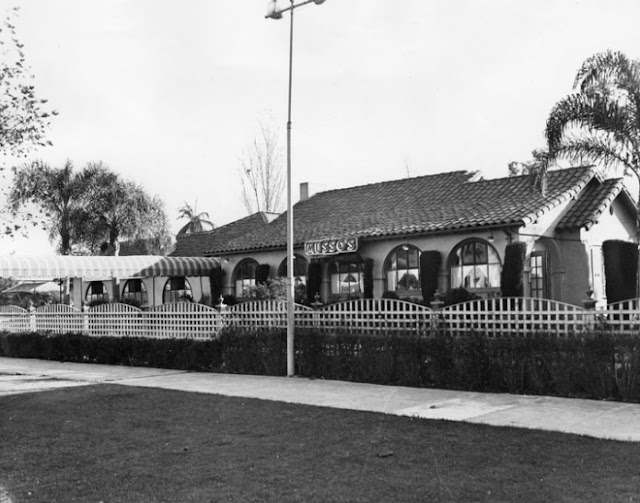 
With the addendum to this aerial photo, we see the location of the Carthay Circle in comparison to Dwarfland which was situated on the median strip running down the center of McCarthy Vista. It started at the corner of Wilshire Blvd., and according to radio announcer Don Wilson, the Dwarf's' garden ran "for about two blocks" towards the theatre. (Also note the location of Dan the Miner, the metal sculpture mentioned in an earlier post.) 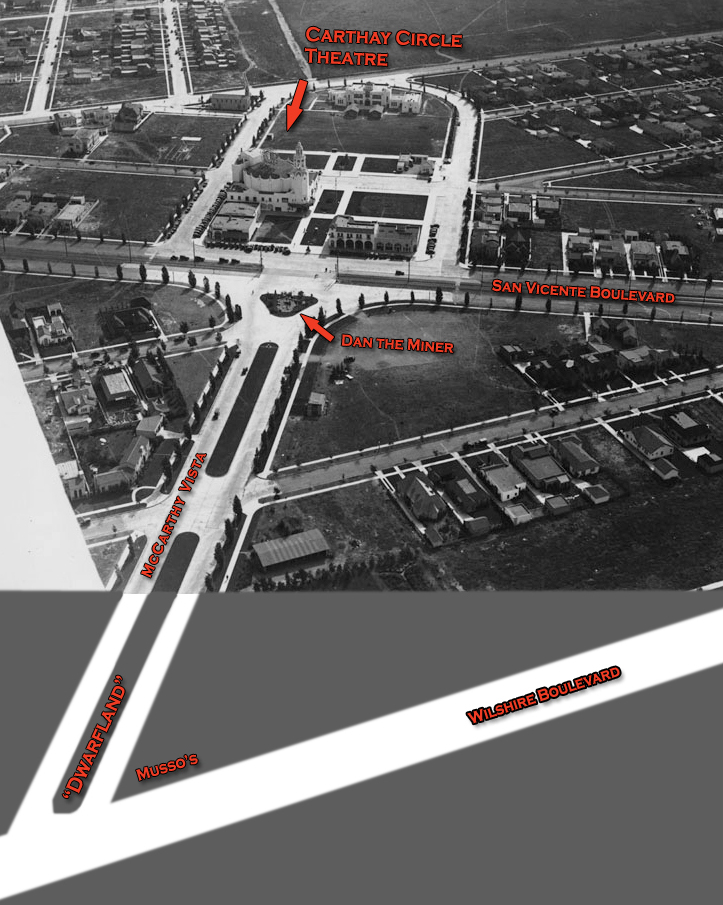 A neon "Snow White and the Seven Dwarfs" sign stands tall behind a perched dragon-like beast. 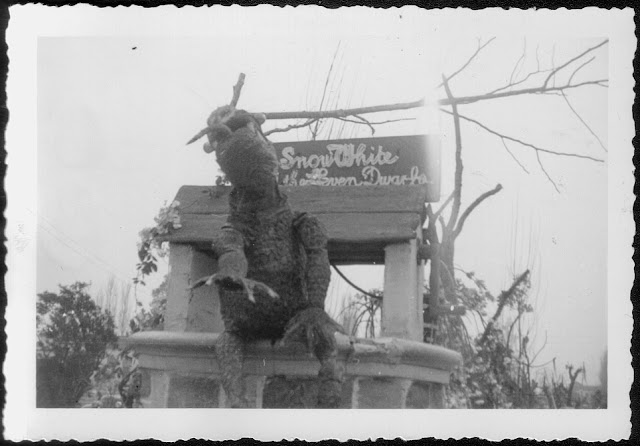 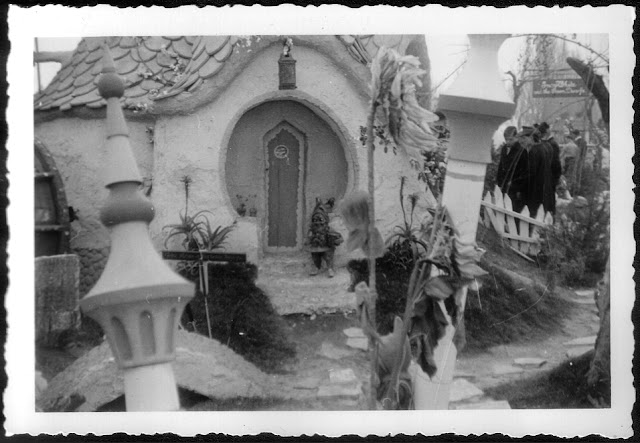 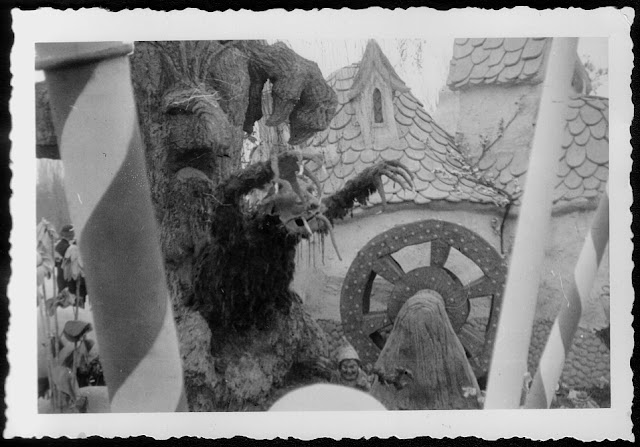 Pics via Animation Who and Where. 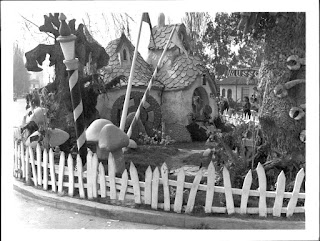 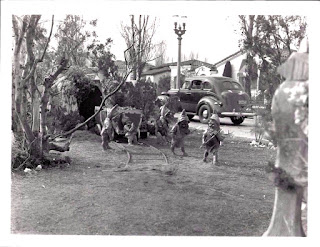 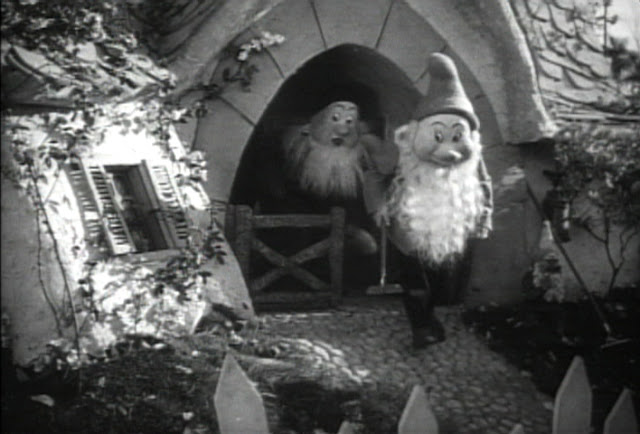 Screen Capture via RKO's How Walt Disney Cartoons Are Made.

Dwarfland, by today's standards, may seem to some almost...what's the word...cheesy. But back in Depression-era 1937, it was quite a sight! And while no one, not even Walt, was thinking theme parks at the time, this little outdoor display was indeed a precursor to bigger things to come.
Posted by Snow White Archive at 12:01 AM