As I've hinted at before, I'm not a big fan of the Disney marketing scheme that lumps the princesses all together rather than highlighting them individually. However, my aversion lies entirely in the realm of merchandise, not with the living breathing incarnations. This is a terrific shot! 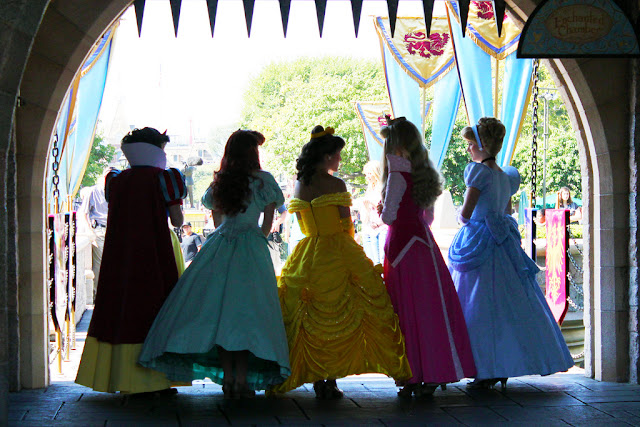 Anyone can shoot photos of princesses. They're out everyday at the theme parks, riding floats in parades, singing and dancing on stage, giving hugs to little ones at meet-n-greets. It's a rare opportunity, though, to catch them like this, all lined up so perfectly together, chatting amongst themselves, no mobs of admirers crowding about. In fact, when I came across this pic, it appeared at first glance to be another excellent Photoshop manipulation by Disney Resort Sam. But no. This unstaged and unaltered shot belongs to Flickr photographer Jane's Jubilee.

It was a week ago today on June 27 when Jane, with her brand new camera and her freshly-purchased Disneyland annual pass, happened to be in the right place at the right time. There, standing before her in the archway to Sleeping Beauty's Castle, were the "magic five"--Disney's first five princesses.

It was on this day that the producers of the television show Extreme Makeover: Home Edition were shooting in the park. If you're like me and not quite familiar with the premise of the show, a quick Google search reveals that it's a program that offers hope to families that may have faced some recent hardship such as a natural disaster or a family member with a life-threatening illness.

According to Jane, the princesses were waiting to be filmed for the program, which now makes perfect sense since there was a little girl involved...

When they came out, they mostly just talked to the family in the show. They did this cute thing where they danced around a little girl...and then they went to a shaded area. They talked a bit amongst themselves and other cast members, then left.

Yes, the princesses do represent a very lucrative product line for the Disney Corporation, but at the same time, they can in a very real way offer a ray of sunshine to folks whose lives may have hit on hard times. 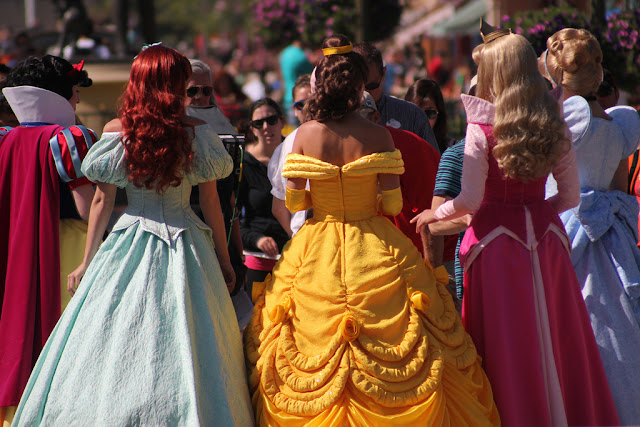 Waiting in the shade... 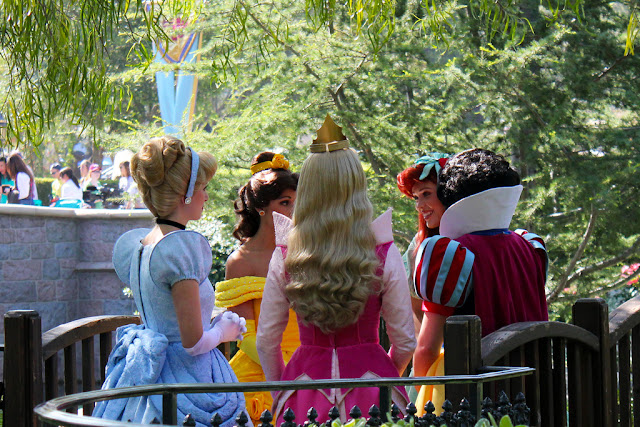 OK. The shoot is over. What do you think they're talking about? Are they staying in character even though they're standing out of earshot of park guests? Or are Belle and Snow actually discussing what they're going to do tonight after work? It doesn't really matter since a few moments before, they brought real joy to a little girl in need. 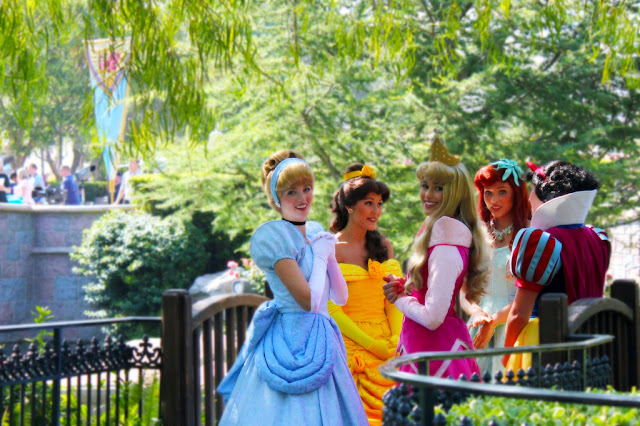 Special thanks to Jane's Jubilee for sharing her photos and princess story.
Posted by Snow White Archive at 12:01 AM