Although Snow White's milestone proceeded the theme park pin-trading craze by a good 12 to 13 years, Disney, and other official licensees, did issue a number of pins (and buttons) to mark the occasion. 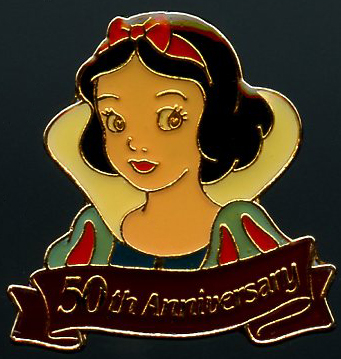 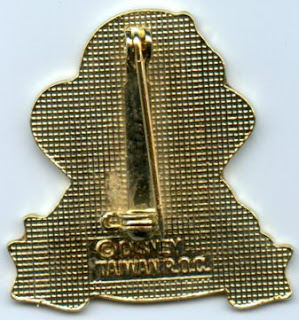 A 9-piece commemorative set exclusively for cast members was available for purchase at the Walt Disney Studios in Burbank, the Company D store at Disneyland, and possibly other cast member locations. They stand approximately between 1" to 1.75" tall and contain "© Disney, Taiwan" on the backside. Original price $28.95. 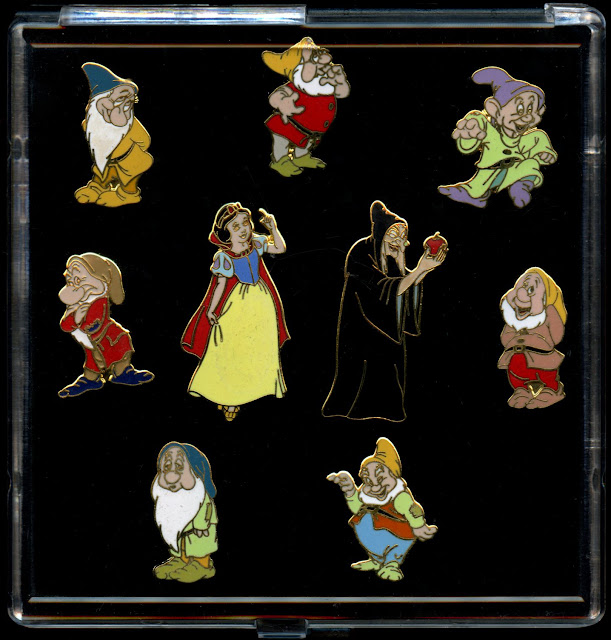 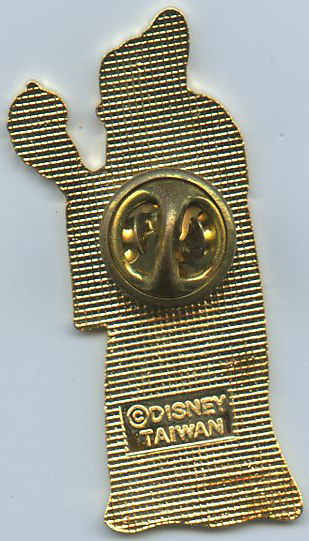 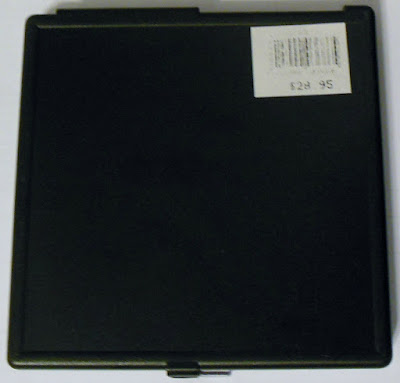 Three near identical and slightly scary-looking "Snow White 50th" pins were also issued as cast member exclusives. The trio differ only in their word coloring. The back reads "© WALT DISNEY COMPANY." 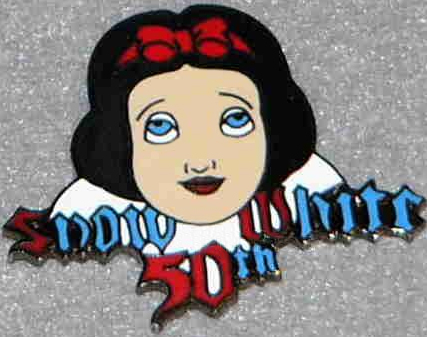 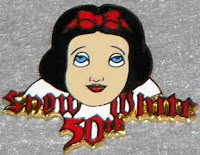 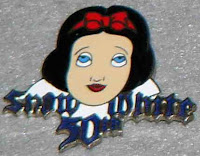 A couple of pins were released that read, "Disney's Golden Anniversary of Snow White and the Seven Dwarfs". One had a pink background, the other green. The back is stamped "© 1937 The Walt Disney Company". 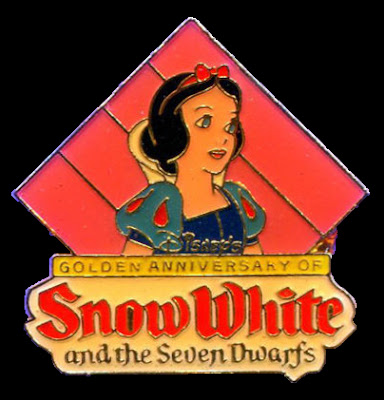 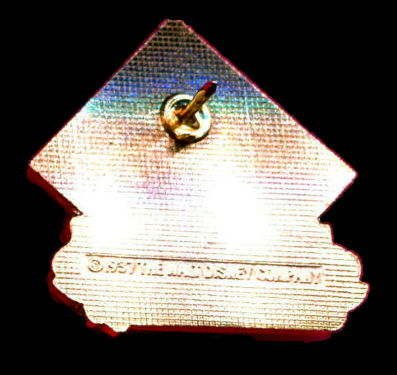 The Golden Anniversary insignia--featuring the dwarfs encircling Snow White with Witch and Queen in the background--was available on two different pins. The first is quite rare and was sold at the Mouse Club/Disneyana Convention that year. It measures 2" x 2" and reads "1987 WD" on the back. 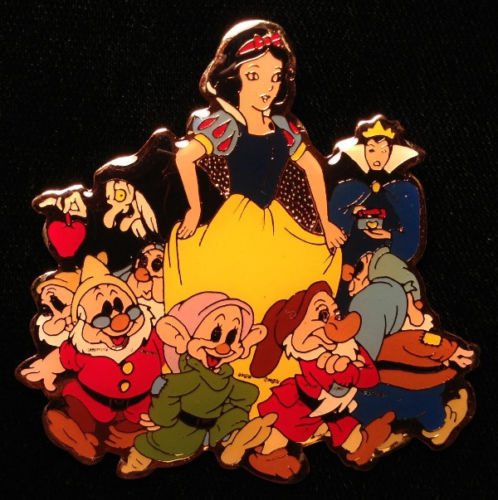 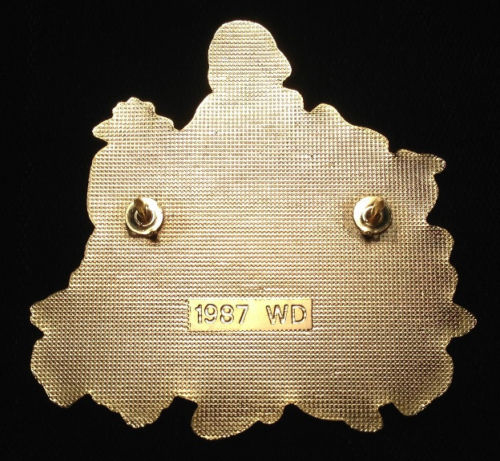 The second insignia pin came in two sizes: 3" and 1.5". The artwork is identical to the button seen below. 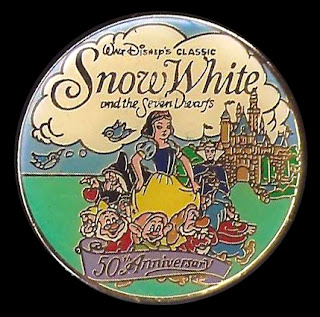 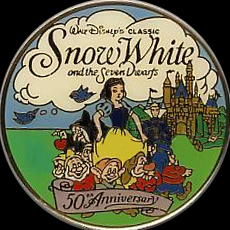 The 50th Anniversary logo button measures 3" across and has a pin-back. Along the rim reads "© 1937 The Walt Disney Company - Distributed by One Stop Posters"

Also see the other Snow White buttons and poster distributed by One Stop during this time period.

Tokyo Disneyland issued a button featuring a variation of the anniversary graphic with text along the bottom that reads "Tokyo Disneyland 1987 Family Film Festival." Measures 3" in diameter. 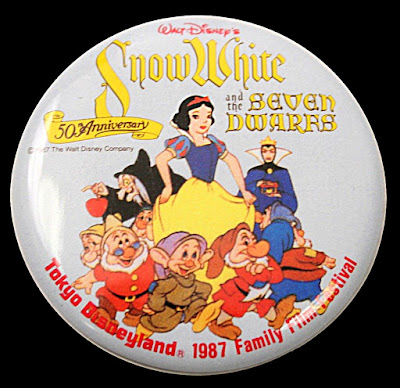 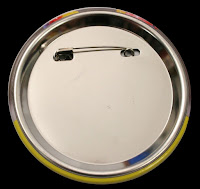 Finally, this is a button worn by McDonald's employees to help promote their Snow White charity posters. 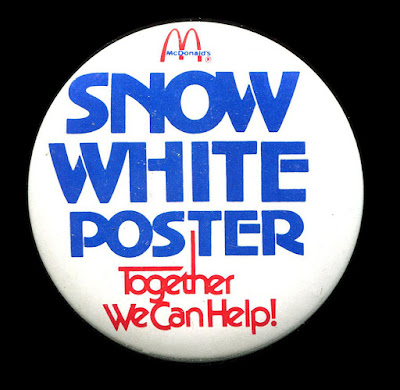 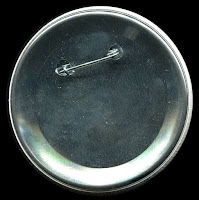 Also see the special "50th Anniversary" name tag that cast members wore for a limited time at Disneyland.
Posted by Snow White Archive at 12:01 AM