The first ever Snow White compact disc was officially released by Disney in 1987 (see it in an earlier post.) The recording (first issued on LP record in 1980) was a combination of the film's soundtrack intertwined with the story narrated by Hal Smith.

The first CD to contain just the soundtrack (without additional narration) was a 1988 disc issued by BMG (RCA). It included the same recordings found on the original Victor 1938 shellac records (with the deleted Dwarfs' Yodel Song lyrics).

Today's archive entry is a look at some of the compact discs produced in the US:

On June 8, 1993, about three 3 weeks before the final North American theatrical release of Snow White, a digitally remastered soundtrack appeared in stores. In addition to the normal songs and musical orchestration, the album also included the two deleted numbers: Music In Your Soup and You're Never Too Old to Be Young. 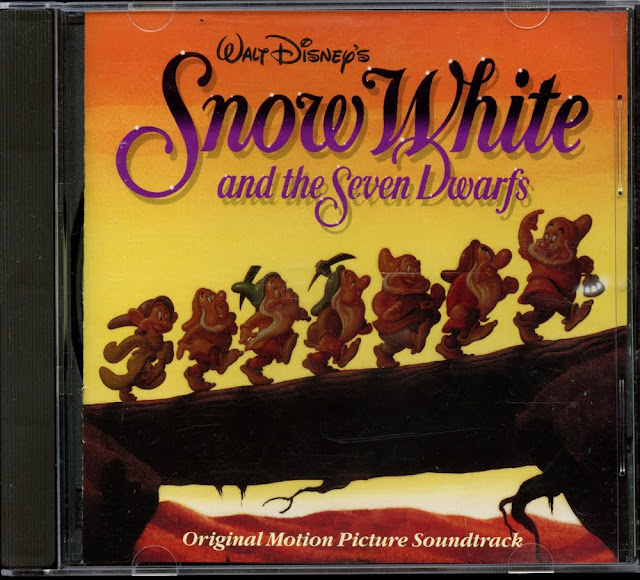 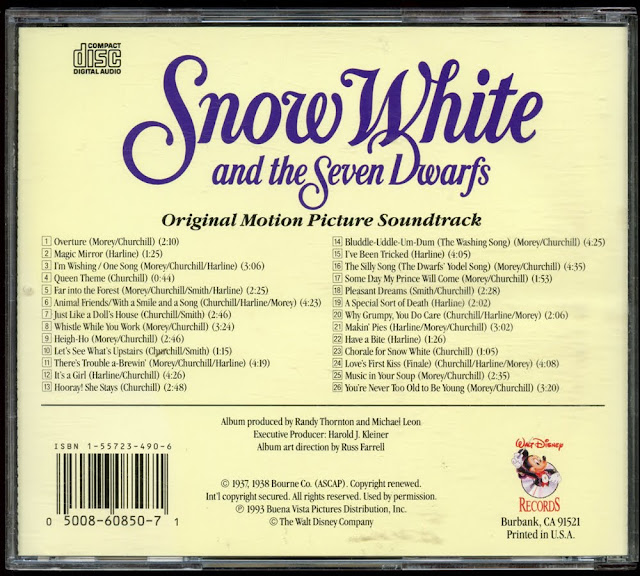 In the liner notes dated January 1993, album producers Randy Thornton and Michael Leon share how the digital restoration was pieced together from seven different original sources.

Also included are the lyrics for each song as well as a chart showing what each of the four composers/songwriters (Churchill, Morey, Harline, Smith) contributed to the final soundtrack. 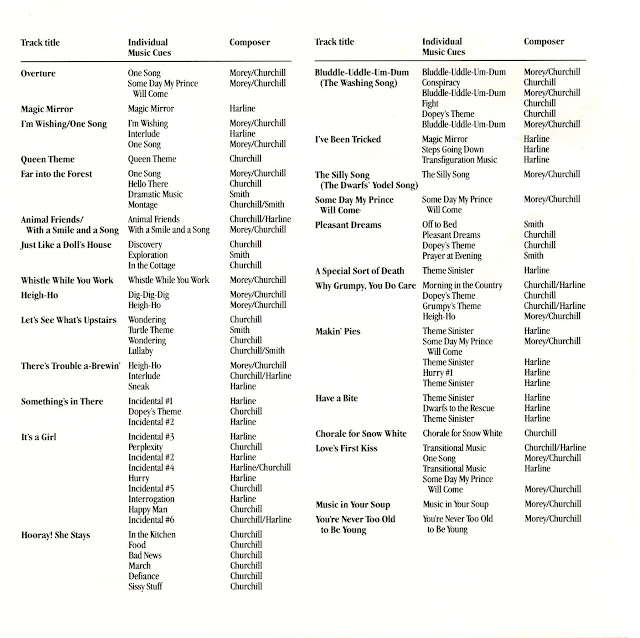 The 1993 CD was also sold in the Soundtrack Collector's Series. A separate cassette tape was available too.


In 1997, the album was released as part of the Classic Soundtrack Series. The CD came shrinkwrapped with a round sticker placed on the outside that read, "Digitally Remastered--Includes lyrics and artwork." 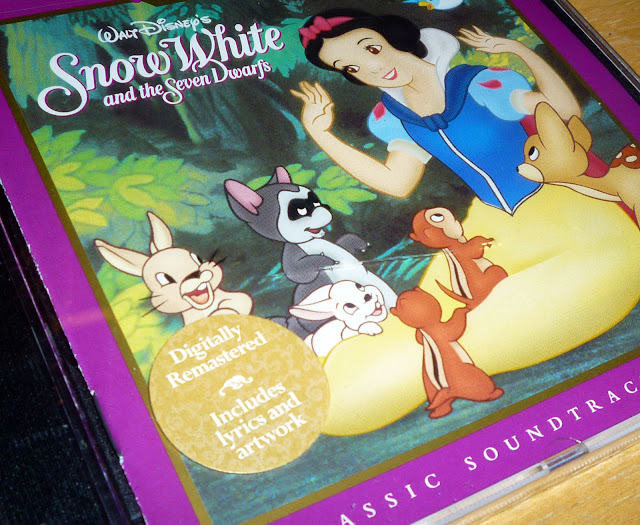 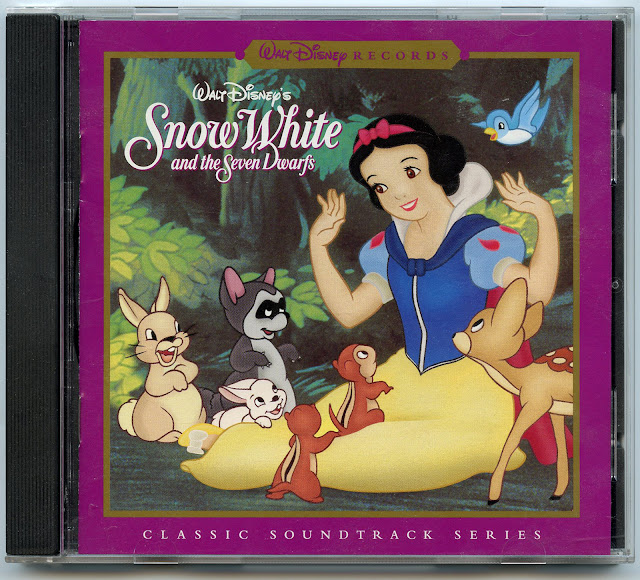 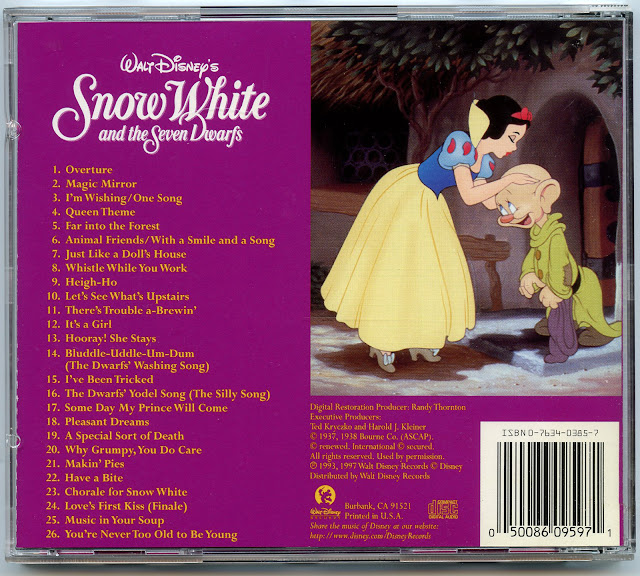 The insert booklet contained different artwork from 1993 but the same song lyrics. The liner notes, dated December 15, 1997, were nearly identical except for an update from producer Randy Thornton. He reveals that 7 seconds of music which had been omitted from the 1993 edition of "Love's First Kiss (Finale)" was now included in this new disc. 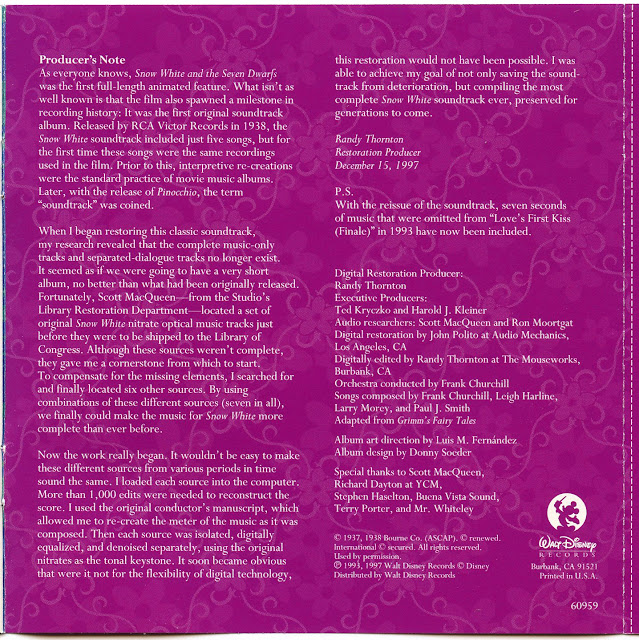 
On September 25, 2001, shortly before the picture premiered on DVD, the digitally remastered CD was again released in the US. 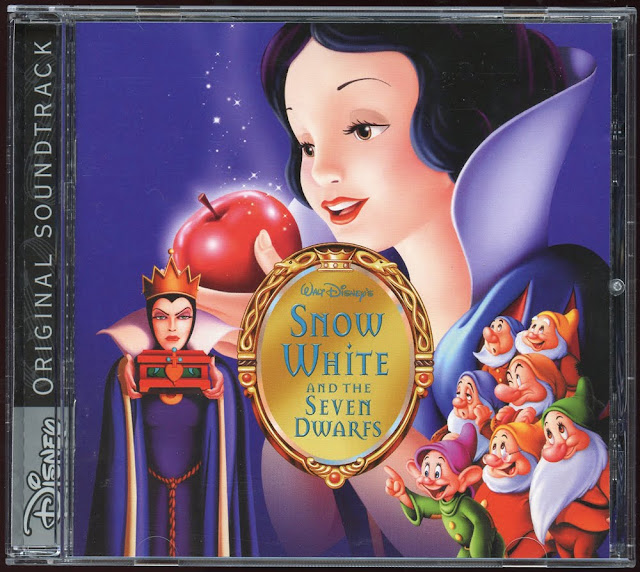 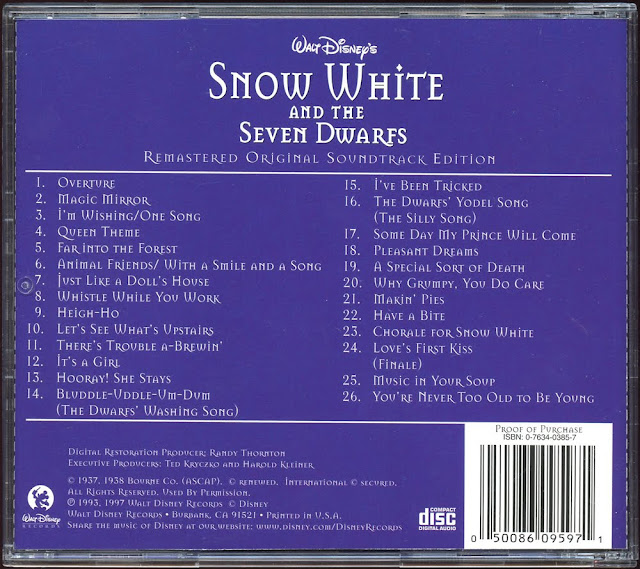 Like in the previous CDs, the lyrics for each song were included with the insert booklet, though the artwork was changed. Identical liner notes.