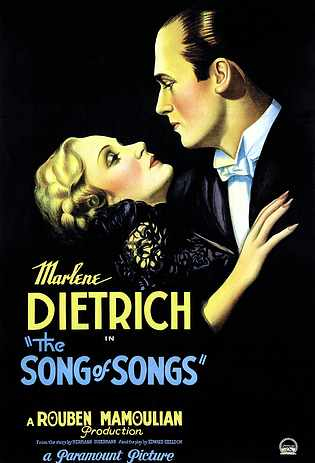 Seventy four years ago tonight, Cecil B. DeMille hosted the Lux Radio Theater presentation of The Song of Songs. The program, which starred Marlene Dietrich and Douglas Fairbanks Jr., occurred on the eve of the world premiere of Snow White and the Seven Dwarfs. Just twenty four hours later, both stars would be there at the packed Carthay Circle Theatre, with a host of other Hollywood elite, to see Disney's first feature-length film.

At the conclusion of the radio performance, DeMille welcomed a very young-sounding Walt Disney to the mic. The two chatted about opening night jitters, the making of the animated film, and the obligatory sponsor plug for Lux Flakes.

The following year, Walt was back on the air when Lux presented the first radio broadcast of Snow White (see earlier post).
Posted by Snow White Archive at 12:01 AM