In preparation for the 1938 release of Snow White to international markets, the Disney Studio created 12 different versions of the film. Scenes which contained English text, such as the storybook opening, were redrawn in the appropriate language. The dubbing of the additional 11 soundtracks was overseen by Roy Disney and Stuart Buchanan.

It's not that either of these men were fluent in foreign languages. They were not. Rather, they simply knew what Walt Disney was looking for in regards to the sound of the voice talent. The actual directing of the actors was left up to native speakers. Some of the dubbing sessions took place in southern California, but most were overseas.

While in Rome for the Italian recording, Buchanan was interviewed by a magazine reporter. The piece appeared in the April 10, 1938 issue of Cinema, no. 43. Pictured on the cover is Eleanor Powell. Accompanying the article are a couple of rare photos from this period of both Roy Disney and Stuart Buchanan. 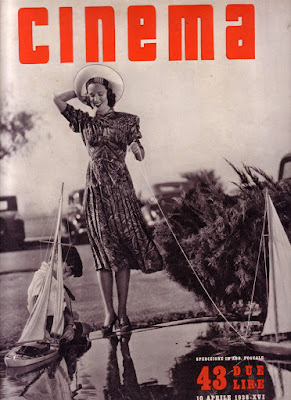 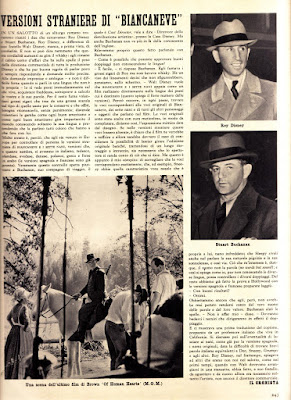 The article was recently translated for us by Snow White expert, Nunziante Valoroso:

REPORTER: How it’s possible that you could approve a good dubbing without knowing the languages?

BUCHANAN: It’s easy. Walt Disney wants Snow White to be seen as if the movie was made directly in the languages of the dubbings. So we must find, in every country, the right voices that sound identical to the original ones of Snow White, the dwarfs, the prince the Queen, and all the characters. Should the voices be very different, the movie would suffer and then it would be better just to show it in the original language. This is my job, to make sure the voices fit perfectly with the images. So that Sneezy has his typical voice, that Sleepy would show, even in his speaking, his tenancy to sleep and so on. What is important to me is the sound, not the words. That’s why, even if I speak only English, I’m able to supervise different dubbings. We tested this way of working in Hollywood, where we recorded the French and Spanish versions.

We objected, then, that he could never know the exact sound of words in Italian, the exact meaning of the script phrases. Buchanan answered : “It’s not my business. It’s the responsibility of the effective dubbing directors.”And he showed us a first Italian translation of the script, made by an Italian professor living in California.

The interviewer's name is unknown. The issue is simply signed, "THE REPORTER". Special thanks to Nunziante Valoroso for sharing these images from his collection and for taking the time to translate the article.
Posted by Snow White Archive at 12:01 AM