This detailed Old Witch statue is currently up for sale at Heritage Auctions. Not a lot is known about the piece, yet it does appear to be a licensed Disney product as stated in their item description:


Here is an incredibly detailed statue of her, complete with yellowed, bulging eyes and wicked grin, gnarled hands, and wooden walking stick. Her face and hands are hand-painted plaster or resin composition, with realistic hair and felt hooded robe, on an ornate base. The base bears the inscription "The Crone from Snow White and the Seven Dwarfs 1937."

She stands approximately 19" tall, on a 1.5" tall base that has an overall size of 14" x 14". An old paper sticker with copyright information is partially torn off from the back of the base, so we really don't know much about who the maker was, but it does appear to be authorized by Disney. 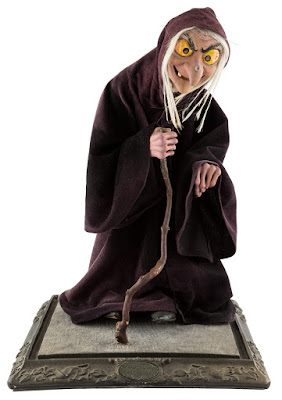 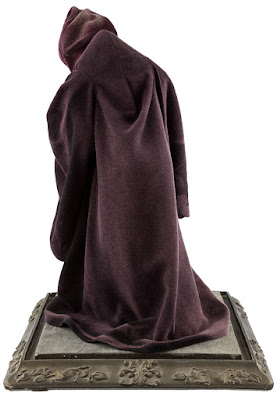 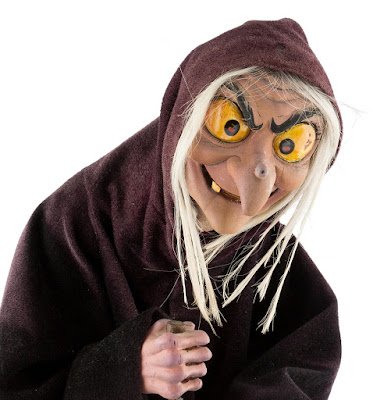 
Former cast member, François Monferran, shared a comment on the possible origin of this statue:


This item might be from the Theme Parks Window Display Department for the Main Street Windows or some stores at the ex WDW Village in Florida. Some would also be on display at the Cast Members' University. When not used in windows, but just for display, the "statues" have a base like this one has.


UPDATE: François contacted Disney artist Kevin Kidney about this figure. In turn, Kevin got in touch with a friend who worked on the Disneyland Main Street Emporium windows. This is Kevin's response:


My friend who worked at Disneyland Decorating in the 1980s says it definitely looks like a window figure. And is in the right scale. She doesn't recognize this exact piece, though, so perhaps it dates to an earlier time, possibly the 60s or 70s.


UPDATE: We now know that this figure was part of a very limited series produced by Walt Disney Imagineering. They were made of resin or some sort of composite material. Collector Steve Spain has one in his collection. Steve graciously shared more details with us:


I believe these were known as WED static display figures and were sold as high end collectibles in very limited numbers at the Disneyana shops during the late 60s to early 80s. They were made by the WED model makers who also worked on the Main Street window displays. The earlier pieces had these ornate bases with them. Later, they were on wooden bases with a brass plaque. I also have a Maleficent with a similar base and construction. They are beautiful little works of art and rarely come on the market.

By the way, if you look very closely you can see the poison apple in the pupils of her eyes. 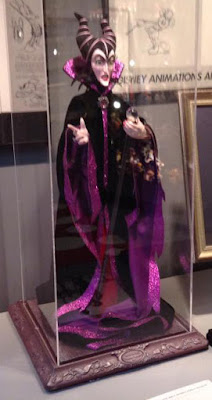 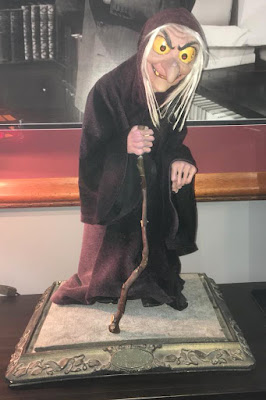 
Special thanks to François and Kevin for their assistance in investigating this figure. And to Steve for the additional info and photos.
Posted by Snow White Archive at 12:01 AM